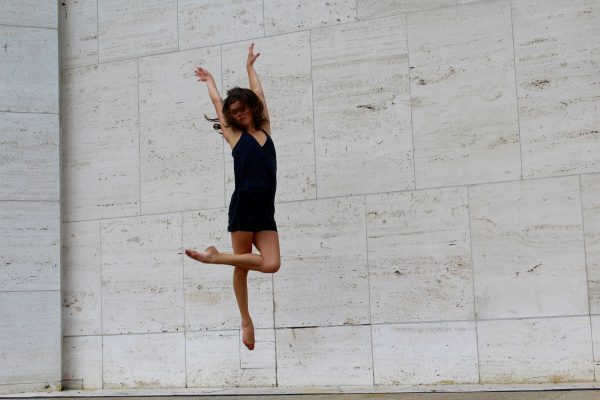 The JUNTOS Collective provided Caroline with a setting in which to explore her passions. (COURTESY OF MCCALL SHEETZ)

We all strive to find that which incorporates what we love with a way to benefit those around us. Caroline Shriver, Fordham College at Lincoln Center (FCLC) ’19, found the perfect combination while dancing with a group of 10-year-olds in the middle of Nicaragua.

Caroline opened the door for our interview donning a slicked back bun for her 10a.m. ballet class and a huge smile—I have come to understand that smile as an almost constant accessory. She hopped over to her dining room table, offering me a cup of tea, excited to talk about her passion and that which occupies most of her waking hours: dance. Apart from dance, she finds joy in helping others, and was able to combine these two passions over the summer with the JUNTOS Collective.

After entering the Ailey/Fordham BFA program in 2015, Caroline stumbled upon JUNTOS. Started by Ailey alum Joanna Poz-Molesky, the organization takes up to 10 students on trips to Latin America to integrate themselves into new cultures, teach dance classes and perform. Over her sophomore year winter break, Caroline spent two weeks in Mexico with other dance students from around the country sharing their passion for movement in Mexican schools and community centers. The program offers the students an opportunity to work with kids in underserved communities while sharing their love of dance. 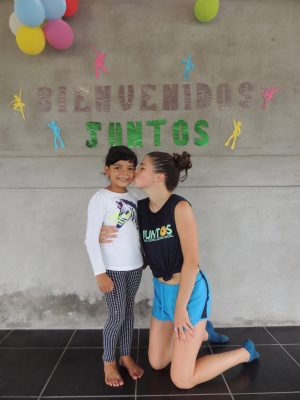 After her experience in Mexico, Caroline knew she had found something special. Only a few months later she had already signed up for the summer abroad program, leaving for Nicaragua in August of 2017. They traveled around the country, visiting the cities of Managua, León, Nagarote and Granada. “We worked with a bunch of different schools, community centers, some were rehab centers [and] some were after-school activity locations. [We] mostly worked with young people ages three to 20…Some communities we stuck with for three days and some we just went and did one performance or one workshop. The communities that we did multiple days with, those were a lot more fun. You got to get to know the kids and teach them something that would build each day.”

While JUNTOS creates an itinerary for the students, they also partner with already established charity organizations in these countries. “One community we went to in Nagarote was called Nicafoto. It was started by a woman from the U.S. who is a photographer and wanted to bring that to Nicaragua and have it be an after-school activity for kids,” she explained. After starting the program, Nicafoto became a place for children to explore photography, get tutored and be fed lunch. Eventually the program connected with JUNTOS, creating a joint effort to inspire young people through various forms of art.

Caroline’s decision to join JUNTOS proved to be fairly life-altering in a number of ways. This joint effort between dance students, non-profit organizers and young people, encouraged her to not only apply to be a JUNTOS ambassador, but to change the entire course of her studies at Fordham. Upon her return to campus in August, she made a significant alteration to her declared major. “I realized that I really love learning Spanish and that I have fallen in love with the communities and the cultures and the areas of Latin America that I’ve been to. I decided to double major in Latin American Studies because I love what I’ve seen in Latin America and I really want to learn more about the communities there. I’ve only seen the surface level of how the culture works there but I know that there’s so much depth.” She continued, “Most countries in Latin America have been through a lot of really challenging histories and I would love to understand those better. I also think the way dance works in Latin America and the way dance and the culture there intertwine is really a special relationship.”

Apart from her major, Caroline has recently joined the JUNTOS program as an ambassador. “We’ll be learning essentially how to run a non-profit, learning how to write grants and proposals and also discussing…what we’re learning about in terms of dance, social action, culture and Latin America.” The ambassador program culminates in a project that she will complete the summer before her senior year, traveling to a country in South America alone for two to three months. Once there, Caroline will teach dance and be able to integrate herself more fully into a new community. “I was thinking about going back to Nicaragua, back to the community Nicafoto,” she explained. “I’m also considering going to Colombia to a town called Agua Fría. I visited my sister when she was living there teaching in a school [and] taught dance a little bit. It was really memorable. The kids were fun and excited to work with me, and it’s also a neighborhood that I think would definitely be receptive to someone coming in and having a class once a day.” Throughout the school year, she will work toward setting up this project, learning the ins and outs of running a non-profit. 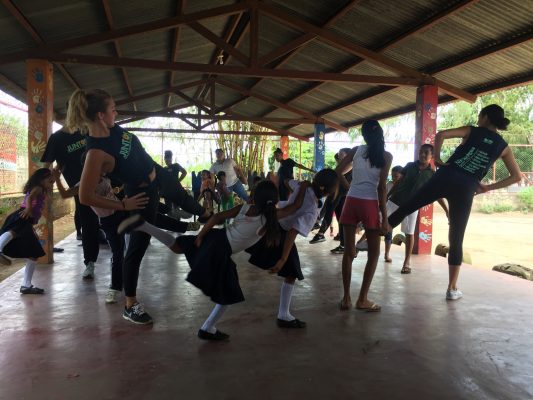 Doing work like this, however, does not come without its downsides. During these emotionally demanding, draining and fulfilling two weeks, Caroline found herself questioning her role in charity work. Coming from a metropolitan city like New York and a private institution like Fordham that houses students from diverse but largely wealthy communities made her think. I pried a little, asking her to explain how she reconciles those feelings.

“That’s definitely something that I think about a lot,” Caroline said, clearly having pondered the idea for some time. “There was one place we went to that was a home for women who were hiding out because they had experienced violence in the home,” she continued. “We just went and performed for them, they didn’t want a workshop, they didn’t want anything else. We stepped out and all of their faces were fairly blank and I couldn’t tell if they were watching us and thinking ‘This is amazing and I’m connecting with this’ or ‘What are these rich North Americans doing, trying to show us something?’ assuming that we think we’re better than them.”

“At the end of the performance they told us how happy they were that we were there and that we had just shared an art with them that they had all really connected with and it had just brightened their day or month or year.”

The role of charity has long been a controversial topic; how developed countries should best give aid remains an important conversation to be had. Caroline, however, has found that there is a valuable opportunity to help others through art. “I think because it’s dance and not anything else, because we’re just sharing movement with them…because it’s not that we’re saying ‘You need to be doing this every day to have a better life’ or ‘This is the best way to money or happiness.’” She continued, “We’re just kind of coming in and it’s all students that are excited about dance, and feel like dance has changed their lives, and we’re all just like ‘Here’s something that has made us really happy and we just wanted to show it to you and offer you the opportunity to do it in a more structured setting,’ there’s no pressure to change what they’re already doing in their lives.”

Perhaps what struck me the most in Caroline’s explanation of the JUNTOS program was her idea of the interaction being an exchange. “A lot of the communities we’ll go [to], they’ll teach us a folklorico dance, like we learned a Nicaraguan folklorico dance that we performed and the whole community laughed at us while we were performing, but they also loved that we were out there trying. It wasn’t a one way interaction, they were offering us something, it was an exchange.”

“Being in Latin America [and] working with dance is really special because it’s such a big part of their culture already. It’s a huge part of socializing, you go out and everyone’s just an amazing dancer and it’s part of being in that culture, so people grow up with a very different understanding of their body and what it means to move,” she explained. “I think that working with people doing that, it’s already something that they know. So for me to be a part of that is really special.”

Many of the students who participate in JUNTOS go in to Latin America not knowing a great deal of Spanish, and bridging that language gap can be hard work. “I think dance functions as that language,” Caroline explained. “I think that’s why my experience at Nicafoto was so special because it ended with us all dancing together and feeling totally liberated and happy, like we’re just having a conversation and we’re hanging out. That wouldn’t have been possible if we didn’t have dance…It’s a special way into understanding their culture and being part of their community.”

Without Fordham, The Ailey School and JUNTOS, Caroline may never have had the opportunity to discover this passion for social work, language and charity through art. Luckily, her persistence and willingness to strive for perfection has led her to an entirely new place of understanding. Throughout our conversation, her deeply ingrained love both for dance and for others became increasingly evident. For me, she had shone a new light on the power of art to transform your worldview and the change that one person can make in the lives of others by simply sharing something they love.

As soon as I stopped recording, Caroline bounced out of her seat, flashing me a smile before heading to her first class of the day.

To learn more about the JUNTOS Collective and the work they do, visit juntoscollective.org.