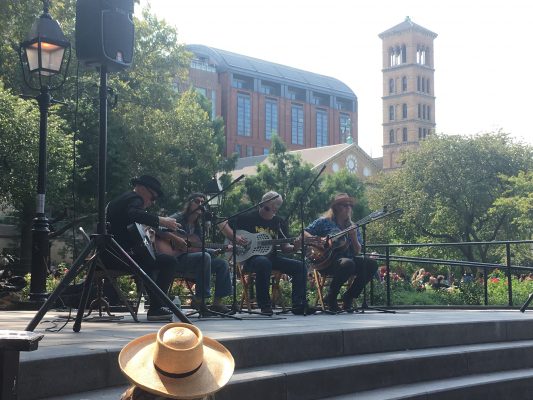 The Washington Square Park Folk Festival, held on Sept. 10 was surprisingly difficult to locate. The temperate late-summer weather had drawn exceedingly large crowds to the park, and people gathered to watch the street magicians and jazz bands that usually frequented the various crevices surrounding the park’s central fountain. There was even a campfire-style circle of various middle-aged musicians, featuring acoustic guitars, ukuleles and tambourines, whose repertoire included both “Can’t Buy Me Love” and “Cheap Thrills.” They had attracted a sizable crowd around them. There was, however, no sign of the Folk Festival, which was, as its name suggested, to be held here in the park.

The festival turned out to be tucked away inconspicuously towards the eastern end of Washington Square Park. The performers stood on a concrete, semicircular stage, in front of which were four rows of lawn chairs and a small set of metal bleachers. A moderate crowd had already developed; it would continue to grow throughout the afternoon. A banner which read “7th Annual Washington Square Park Folk Festival” was hung at the rear of the stage.

Twelve-year-old Nora Brown opened the festival; her clawhammer banjo skills easily surpassed those of most adult players. Her confident and collected stage presence, resembling that of a seasoned performer, was also something to be admired.  Brown played the much larger Brooklyn Folk Festival this past April, and seems to have already amassed quite a following among New York folk musicians.

The Down Hill Strugglers took the stage next. They were fronted by Eli Smith, one of the co-founders and directors of the festival. The band is based out of Brooklyn, where Smith also works at the Jalopy Theatre and School of Music (“The best and only folk music venue in New York City at this moment,” Smith said). The Strugglers’ music can probably be best described as “old time” or “string” music, although they draw on folk, country and bluegrass influences. A mixture of instrumental and vocal songs kept the pace interesting.

Smith, who also helps organize the Brooklyn Folk Festival, understands the importance of playing in the heart of Greenwich Village: Washington Square Park. The park is “a historic place for folk music in the United States and here in New York City, going all the way back to the 1940s,” he explained. “We’re proud to have been doing this [festival] for seven years.”

Smith also observes the uniqueness of the festival: “This is the first formal presentation of folk and roots and traditional music in Washington Square Park,” he noted. Most music in the park is that which is played informally by buskers and street performers. Smith and his friends “have been playing music out here for many a year,” along with “so many others.”

Brian Kramer, an acoustic blues player who followed the Down Hill Strugglers, has busked in the park for the entirety of his musical career. He learned to play from his elders, and teaches those younger than him. As his career gradually led him away from busking and towards better paying gigs, playing the folk festival evokes feelings of nostalgia. “Everything’s come full circle,” he said.

One has to wonder if such “formal presentations” of folk to some extent corrupt the spirit of the music.  The genre has no doubt evolved considerably, for better or worse, since Woody Guthrie first brought it to the mainstream in the 1940s. In Washington Square Park, however, there remains a passion for the music and strong communal sentiments, both of which are traits that have always defined folk music. The folk tradition is one that lives on through events like the Washington Square Park Folk Festival, perpetuated by players and listeners alike.