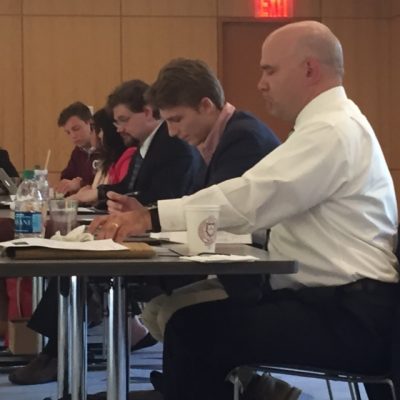 An investigation headed by Title IX Coordinator Anastasia Coleman and members from the Department of Public Safety is well underway, looking into a Campus Assault and Relationship Education (CARE) and Bias presentation given by Christopher Rodgers, dean of students at Rose Hill and Deputy Title IX Coordinator during a Resident Assistant (RA) training session on Friday, Aug. 18. Announced via a university statement email, the investigation began Aug. 27, following outbursts of condemnation from both RAs and residents on the scene and on the web.

The Observer reached out to the Title IX Coordinator, Anastasia Coleman, and the Assistant Vice President of Communications, Bob Howe. Both offices declined to comment, nor gave any indication of how long the investigation would last.

The most circulated criticism came from RA Rowan Hornbeck, Fordham College at Rose Hill (FCRH) 18. She responded to the incident in a statement written shortly after, which detailed the events of Rodgers’s presentation and the responses it quickly received, hers included.  According to Hornbeck, she was interviewed by Coleman on Aug. 28, and was asked to go over “all the details” with her.

Hornbeck, along with her fellow RAs, attended the presentation as a part of the mandated campus assault training that RAs receive each year before their residents arrive.

Early in his address, Rodgers stated that he would introduce campus assault by addressing the “political” context in which he believed the subject was encompassed. He started with a trailer of “The Hunting Ground,” which he explained was an example of the leftist “agenda.” The documentary, whose trailer has been featured in past CARE presentations, covers the presence of sexual assault on university campuses and argues that colleges have provided insufficient protection for victims.

“Within minutes, students began leaving the room upset,” Hornbeck said in her statement. “The two women sitting next to me got up and left the room before the video even began.”

Fielding raised hands and initial questions of appropriacy, Rodgers went on to play a video from PragerU titled “Are 1 in 5 Women Raped at College?” which was to represent the opposite end of the “political context.” The video contends that there is “no evidence that sexual violence is a cultural norm” and that documentaries such as “The Hunting Ground” are damaging to a college environment. More students left. More hands went up.

Rodgers explained that neither video was “correct,” but students questioned the relevance of establishing a political relationship in the first place. Another RA mentioned that survivors of sexual assault were almost certainly amongst their ranks, and that a video denouncing the seriousness of rape and campus assault could upset them. Rodgers concurred, noting that the video would never be something he would show to students.

Hornbeck restated that, regardless of the content of the videos, choosing to portray campus assault as a political issue was an inappropriate action. Rodgers disagreed, arguing the importance of its inclusion in his presentation.

The rest of the group broke for lunch upon suggestion of kimberly russell, assistant dean of students, who remained in the presentation room, debriefing.

At that point, Hornbeck left as well, walking into the women’s bathroom where she described seeing about ten RAs gathered inside, some of them crying. “A lot of the women I saw in there were new RAs,” she said. “It was just really striking that there was this group of women with tears streaming down their faces, talking through their tears about what had happened.”

Professional staff members were also allegedly among the group of women huddled in the bathroom, including a graduate assistant for CARE programming, Barbara Alameda.

The rest of the group broke for lunch upon the suggestion of Kimberly Russell, assistant dean of students, who remained in the presentation room, debriefing. Soon after, RAs received texts that the remainder of their training was cancelled for the day. Some were forced to wait to retrieve their bags from the room until the discussion had ended.

The RAs returned Monday, Aug. 21 to resume their training, which included a presentation from Fordham President Rev. Joseph M. McShane, S.J. as well as a speech from Senior Vice President for Student Affairs Jeffrey L. Gray.

According to RA Daniel Levy, FCRH ‘18, Gray indirectly addressed the incident, speaking about “not knowing the facts before, and not jumping to conclusions.” Dean Rodgers was present at both presentations.

After adjourning for the day, Hornbeck said she was walking home when Dean Rodgers approached her in his car. He wanted to talk to her “in private.” He explained that it wasn’t his intention to upset anyone, and that, if he had known it would have such a negative effect, he wouldn’t have shown it to anyone. Hornbeck had since learned from her Resident Director (RD), Karen Zuniga, that Rodgers, who typically coordinates his presentations with the dean of students at Lincoln Center, Keith Eldredge, had actually given a similar presentation to a group of RDs before he spoke in front of the group of RAs on Friday. According to Hornbeck, she reminded Rodgers that RDs had in fact voiced their disapproval for the video, to which Rodgers reacted with “complete shock,” denying that the RDs had mentioned anything of the sort.

On Thursday, Aug. 24, it was decided and announced that Rodgers would finish the remaining CARE and Bias training that had been cancelled that past Friday. Rodgers delivered an apology to the RAs similar to the one he had allegedly given Hornbeck several days before: that if he had known he was going to get a reaction like the one he received, he wouldn’t have done it. He said that he wanted to continue with the training, however, he would answer any questions or concerns the students put forth.

“He was apologizing for how he felt, and not what happened”

Levy did not feel as though his apology went far enough. Hornbeck expressed a similar impression: “He was apologizing for how we felt, and not what happened,” she said.

It was brought up again that RDs had raised concerns prior to his presentation to the RAs. Rodgers confirmed this, to which Hornbeck pointed out that this contradicted the story that he had given her Monday. Rodgers denied the inconsistency, alleging that what he had said Monday was that RDs didn’t demand he remove the video, and that he had in fact edited sections.

“I told him directly, ‘what had happened has really broken our trust in you,’” Hornbeck said. Rodgers responded, saying that he hoped the RAs would learn to trust him again in the future. He also mentioned that while he was not going to shut down the discussion, he wanted to go on with his training. He asked for a show of hands of who wanted to move on with the presentation. Less than five percent raised their hands, according to Levy.

The discussion eventually drew to a close, but there was little time left to continue with the training. Rodgers ended up giving “a shotgun version” of the CARE and Bias training, that many, including Levy, felt was completely inadequate.

“I told him,” Levy said, “by coming back to this presentation, you know how many people were upset the first time you did it, whether you lost one RA’s attention because they were in the bathroom, or they were just too upset to listen to you, you’re doing the presentation an injustice.” He estimated that the training lasted only a total of eight to 15 minutes.

That afternoon, Rowan posted her statement on Facebook. The original link was shared 86 times, and prompted hundreds of responses from students on the internet, including a condemnation of the incident from the Fordham Coalition Against Relationship and Sexual Violence.

The Coalition’s statement, which denounced Rodgers’s presentation as “harmful, irresponsible and detrimental to the comfort and safety of the student body,” was signed by a number of Fordham club leaders. Chandler Dean, Fordham College at Lincoln Center 18, President of Stove’s Cabin Crew Comedy Club, and a signatory argued that the presentation displayed “a clear misallocation of priorities” in politically contextualizing sexual assault, “when clearly, the issue itself is far more damaging to the condition of campus life than whatever someone might perceive as a liberal or conservative perspective of the issue.”

On Friday, Aug. 25, Rodgers held a Q&A for approximately 20 RAs who still had concerns.

“I know it may not seem appropriate to associate a comedy club with an issue so serious,” Dean said, “but it is meant to demonstrate that even as someone who believes that you can make light of a lot of situations, and even as someone who has spent a good deal of time utilizing humor to discuss things of serious nature, that there are still lines that ought not to be crossed. And that if we, college students, whose primary goal is to make people laugh, have managed to, over the years, never cross these sorts of boundaries, then certainly a full-time employee of the university, in a position of Deputy Title IX coordinator ought to be just as cognizant, but certainly more so of those lines.”

On Friday, Aug. 25, Rodgers held a Q&A for approximately 20 RAs who still had concerns. He encouraged them to be critical. If there was anything they disagreed with, they should call it out. Several RAs proposed the forming of a student staff member committee, free from the oversight of a superior officer. Rodgers stated that, although he recommended going to the Assistant Director of Leadership and Development & Training, Justin Muzzi, he would be open to the idea, which he had previously rejected in the past, according to Hornbeck who attended the meeting.

She brought up that several years ago, when the idea was proposed at a similar Q&A, Rodgers had told the student staff that if they had a problem with the level of representation they were given, they should find a new job. Rodgers denied this.

“It was another instance of raising concern and him shutting us down,” Hornbeck said.

Despite these frustrations, RAs were grateful for Rodgers’s willingness to participate in a discussion. “We definitely thanked him for coming to give the Q&A,” Levy said, “and he talked about how difficult it was to be the one who was being questioned. He said that it’s not easy to field questions like this, that you have to understand, I don’t have all the answers off the bat.”

In her statement, Hornbeck expressed that she had zero confidence in the performance and conduct of Dean Rodgers. “Ultimately, I would like to see him removed from his position, as a whole from the university,” Hornbeck said. At the very least, she wants him removed from the position of Deputy Title IX Coordinator.