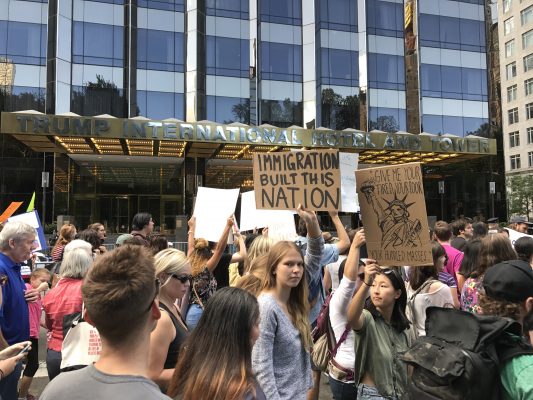 By MORGAN STEWARD and SOPHIE KOZUB

In the wake of President Donald Trump’s plan to phase out the Obama-era Deferred Action for Childhood Arrivals (DACA) executive order, Fordham President Rev. Joseph M. McShane, S.J., and other members of the Fordham community have publicly demonstrated their support of DACA recipients.

In an email sent to the Fordham community on the morning of Sept. 11, McShane called Trump’s decision to end DACA “a naked appeal to the darkest side of human nature,” and “a stain on the promise of our country.” He further stipulated that the decision “throws the lives of 800,000 Dreamers into turmoil, damages our economy, and erodes our national security.”

Along with his condemnation of the decision, McShane included a link to the U.S. Conference of Catholic Bishops’ statement on the cancellation of the DACA program, as well as a link to the university’s Resources for Undocumented Students (DACA) webpage, which has been updated to reflect the administration’s decision to rescind DACA.

The updated webpage states that Fordham is committed to protecting “the privacy of student information and records from any unauthorized disclosure,” will not “function as an agent of the federal government regarding enforcement of federal immigration laws” and “will, as an institution of higher education, continue to embrace its designation as a ‘Sensitive Location’ as defined by [Department of Homeland Security (DHS)] policy.” This designation means that the DHS will generally avoid engaging in certain enforcement actions on campus, such as arrests, interviews, searches and surveillance, according to the webpage.

The Sept. 11 email concluded with a message from Tom Dunne, vice president for administration, detailing the university’s efforts in support of the DACA program.

“We will continue to actively and aggressively engage federal policy makers in an effort to either reverse the order or secure a legislative remedy,” says Dunne. “We are urging the White House and our elected officials in Washington, D.C., to support legislative proposals such as The Dream Act (Durbin-Graham).” He added that the university’s efforts “include, but are not limited to,” internet letter writing campaigns, postcard campaigns, radio advertisements and podcasts, newspaper editorials, using phone banks for call-in campaigns, involving university stakeholders and Congressional visits.

Support amongst the wider Fordham community almost immediately began to develop following Trump’s decision, with students gathering on the McGinley Lawn of the Rose Hill campus in order to “stand against racism and xenophobia, as well as the current threats to DACA recipients,” according to the Fordham Ram.

Fordham students also took part in a massive rally in support of DACA recipients and all immigrants on Sept. 9 in Columbus Circle. The Facebook page for the event had 6,000 people indicating that they would be “going,” with another 23,000 indicating interest.

McShane’s Sept. 11 Statement was preceded by other statements of support for DACA Recipients.

“There are so many people here who are immigrants, who are recipients of the DACA program, so it’s important to go out and show your resistance and be an activist to stand up for these people,” said Alexis Chapin, Fordham College at Lincoln Center (FCLC) ’21, who was there with other Fordham students.

Among the other students in attendance was Katherine Kuemerle, FCLC ’21.

“We’re so close to this area that it’s easy for us to come and protest and stand up for the people who can’t have their voices heard,” Kuemerle said.

Other members of the Fordham community could be spotted throughout the assembled crowd, sporting Fordham hats and sweatshirts. One student with a Fordham tote bag was among a small group of Antifa protesters, but they de clined to provide their name to the Observer.

McShane’s Sept. 11 email was preceded by a similar email on the morning of Sep. 6, in which he endorsed a statement made by the Association of Jesuit Colleges and Universities (AJCU).

“Dreamers have planted roots here as students and young professionals, but as a result of today’s rescission, they will now be forced to become pawns of political maneuvering in Congress,” the AJCU statement reads. “The nation’s 28 Jesuit colleges and universities will make every effort to protect the Dreamers among our students and alumni.”

A week prior on Aug. 31, McShane also sent an email to the Fordham community stating that he had signed the Ignatian Network’s Maintain Deferred Action for Childhood Arrivals (DACA) letter to White House Chief of Staff John Kelly.

Prior to his more recent statements, McShane signed two statements in solidarity with undocumented students in December 2016. He again asserted his support of DACA recipients in January in response to Trump’s initial immigration executive order.

Fordham students have demonstrated support for immigrants in the past, with over 100 members of the Fordham community gathering in February to protest Trump’s immigration executive order.