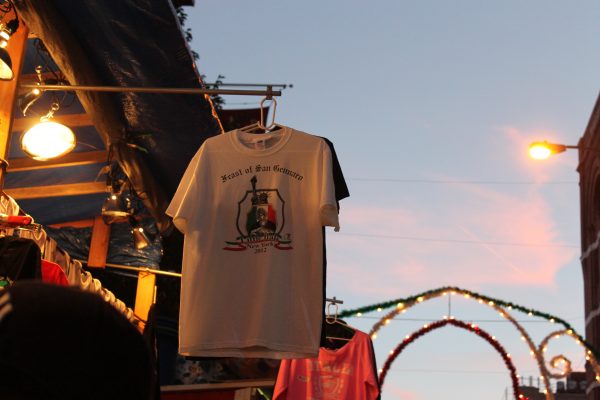 The feast of San Gennaro has grown to celebrate the rich Italian culture in New York's Little Italy.

The first Feast of San Gennaro celebrated in New York was held on Sept. 19, 1926, as Italian immigrants from Naples observed the martyrdom of Saint Gennaro, who died on the same date in 305 A.D. Since then, the festival has grown into a massive, 11-day affair.

The 91st annual Feast of San Gennaro will be held in Little Italy from Sept. 14 through Sept. 24. The Feast is one of New York City’s largest and longest running religious festivals, and has been featured in films such as “The Godfather Part II” and “Mean Streets,” as well as television shows including “CSI: NY.”

The Feast of San Gennaro has had a long and tumultuous history. In 1995, newly-elected mayor Rudy Giuliani threatened to shut down the festival over alleged mob ties and improper financial dealings. The directors of San Gennaro were forced to clean house, and a community group, led by Mort Berkowitz, was formed to oversee the festival. Berkowitz has since become involved with numerous Little Italy events, including the winter and summer Carnevales and Columbus Day festivities.

Under Berkowitz’s direction, the Feast of San Gennaro has become one of the last remaining vestiges of a neighborhood on the brink of extinction. Little Italy, which once spanned more than 50 downtown blocks, has since been confined to a three-block radius around Mulberry Street. Ever-increasing rent has put the futures of even the few remaining businesses in the neighborhood in jeopardy. Today, fewer than five percent of residents living within what was once Little Italy actually identify as Italian-American, compared to roughly half 50 years ago. As the surrounding neighborhoods of Chinatown, SoHo and the Lower East Side close in, Little Italy is now little more than a nostalgic tourist destination  (part of the neighborhood has even been renamed NoLIta – “north of Little Italy”).

The fact that Little Italy is quite literally disappearing makes it unique among gentrifying New York neighborhoods. While places like Harlem and the Lower East Side experience tenant displacement and rent increases, geographically, they still occupy the same streets within the same borders. Conversely, almost all of what was formerly known as Little Italy is now part of Chinatown, as the Chinatown Business Improvement District (BID) absorbed most of the neighborhood in 2011. BIDs are organizations responsible for neighborhood upkeep and tourism promotion, and have long been criticized for advancing gentrification. The formation of the Chinatown BID was especially controversial, as it caused numerous businesses on the famed Mulberry Street to be listed online as located in “Chinatown.” The National Park Service recently designated a “Chinatown and Little Italy Historic District,” with no distinction between the two neighborhoods.

The uncertain fate of Little Italy has similarly put the future of the Feast of San Gennaro in question. The shrinking of the neighborhood means that the bulk of the procession route now technically takes place outside of Little Italy. In 2011, boutique workers in NoLIta requested that the route be changed, as to keep the “greasy hands” of the Feast attendees away from their expensive wares. This request, not surprisingly, did not sit well with either the festival directors or its longtime supporters. Ensuing Little Italy community board meetings were filled with protestors, and letters were received from Italians from across the world expressing their support for the festival, and the traditions and history it represents. Ultimately, the San Gennaro directors won out, and the city ruled that the parade would not be scaled back.

The Feast of San Gennaro returns Sept. 14, concentrated on Mulberry and Grand Streets. Vendors will be open 11:30-11:00 Sunday-Thursday and 11:30-midnight on Fridays and Saturdays, and there will be live music every night from 7:00-9:30. The focus of the Feast is the Grand Procession, in which a statue of Saint Gennaro is carried from the Shrine Church of the Most Precious Blood through Little Italy after a celebratory Mass.

Despite the uncertainty surrounding the future of Little Italy, The Feast of San Gennaro exemplifies the power communities have to maintain tradition in the face of change.