Extremist Politics Has Gone Too Far 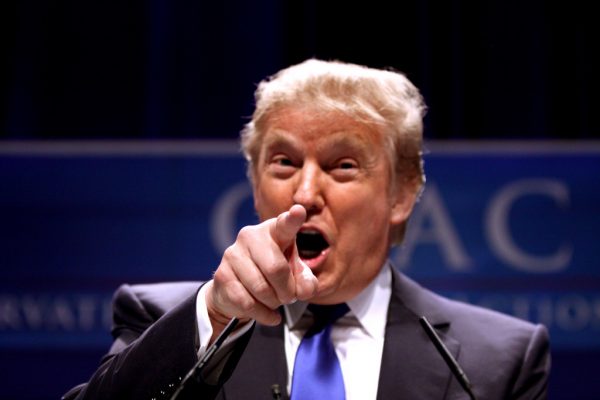 Donald Trump exemplifies a politician who perpetuates the nationwide issue of extremist politics. (COURTESY OF GAGE SKIDMORE VIA FLICKR)

On Oct. 11, 2008, a spectator at a John McCain rally told the Republican presidential candidate that she did not trust then-Senator Barack Obama because “he’s an Arab.” Senator McCain promptly cut her off and defended him, saying that he’s a “decent family man” with whom he disagrees politically. This comment may seem to be taken from a bygone era of respectful politics, but one might forget that it was just nine years ago. In 2017, we hear constantly of senators, cabinet members and the president attacking entire parties. For example, a tweet from Senator Bernie Sanders, a liberal, reads, “Republicans must start worrying about the planet they will leave their kids, not the contributions they get from the fossil fuel industry.” Meanwhile, President Trump, a conservative, tweeted this in April: “What’s more important? Rebuilding our military – or bailing out insurance companies? Ask the Democrats.”

Too frequently, politicians generalize the views of opposing political parties and, in doing so, condemn all members of a party at once. I doubt anyone would disagree with me if I said that President Trump dislikes most Democrats just for being Democrats. But bipartisanship is a two-way street. Republicans are not the only ones at fault; Democrats and liberals such as Senator Sanders, Senator Elizabeth Warren, Minority Leader Chuck Schumer and others have work to do in this area as well.

But I won’t pretend that I haven’t dealt my fair share of unfair criticism as well. I am the first to admit that this is an issue upon which I, and some of my closest friends and family, need to improve. More likely than not, you have done this too. And I get it. All of us are frustrated, worn down and, quite frankly, livid. This anger has led us to back into corners of extremist politics: a “my way or the highway” mentality. Many of us are staunch conservatives or immovable liberals who refuse to listen to reason or be patient with members of other parties. But let me assure you that there is no surer way to stifle progress.

Health care is the perfect example of a ridiculous lack of development. President Trump and GOP Senators have been promising to “repeal and replace” the Affordable Care Act for over two years now. And yet here we are in August 2017, meeting after meeting, vote after vote, and over 200 days into Trump’s presidency — without a single step forward in passing an improved or even comparable health care bill. The Republicans who have been promising to rid America of Obamacare have made a fatal mistake, though: they have been too stubborn. They have not worked at all with Senate Democrats, many of whom are willing to work in a bipartisan setting to improve healthcare in America.

This is a low point in American history. One could argue that there have been many low points this presidency, but this one hits particularly hard because the Senate is at a stalemate over health care. This is not a local traffic law. Tens of millions of people’s lives are on the line. If our elected representatives cannot agree on the health care coverage for about 23 million American citizens because they are too stubborn, this 115th Congress should be ashamed of itself. It is on the wrong side of history.

The time for change is now. The selfishness of modern-day elected officials is inexcusable, but the focus should not lie solely on them. This movement must start at home with us. We go to a liberal arts college where conservatives are fewer in number. I encourage you to have a productive conversation with your Republican suitemates, classmates or anyone else with whom you disagree. Additionally, I firmly believe in the right and responsibility to talk to your representatives. As their constituents, you have the power to let them know that interparty diplomacy, however radical an idea it may seem given the current political climate, is the right step forward. Perhaps Representatives and Senators should look to the example set by Senator McCain, who recently called for Congress to “return to regular order with input from all of our members – Republicans and Democrats – and bring a bill to the floor of the Senate for amendment and debate.” His bipartisanship is to be admired by all Americans of all political parties, for that bipartisanship is both an effective means forward and the American way – just ask George Washington, the original party opposer.