A Day Down Edgware Road 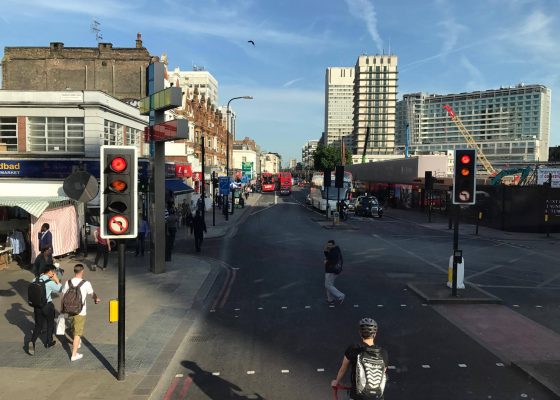 A view of Edgware Road from the top of a double-decker bus. (KARALEE ROGERS/ THE OBSERVER)

Sunday began with a cough…again.

For the past five days, I had gone to sleep hoping that when I woke up, I would no longer be sick— as if my silent pleas and wishes for health would magically clear my nose and soothe my throat.  However, I awoke from my sleep in a fit of hacking and wheezing. As my eyes opened and my vision adjusted to the dimly lit room, I groaned.

Rolling over to face the window, I noticed the weather outside was gorgeous, so I rebelled against the general feeling of ick that threatened to resign me to a day inside the flat. Glancing over into the kitchen, I noticed that the bananas on the counter had lived far past their prime and decided that making banana bread would be an easy, low-stress way to pass the time. I promptly ventured out onto the streets of London to gather the supplies I would need.

I walked down the familiar road of Clifton Gardens, with its tall white buildings surrounded with pointed black fences and freshly manicured lawns, lined with supermarkets and coffee shops.  I needed bowls and baking pans, items that wouldn’t be available in the nearest Tesco supermarket, and decided to try my luck down Edgware Road.

As I walked, the landscape around me changed. The familiar English of store signs transformed into the swirling pattern of Arabic, and I noticed more and more women wearing hijabs.  As I passed markets and restaurants, the warm smells of cooking meat and burning incense met me on the sidewalk.

I turned off the sidewalk and into a market, taking time to peruse the colorful aisles. The whole store was small, barely the size of my shared flat, and it was packed floor to ceiling with shelves of food and ingredients I found unfamiliar.

Unable to find what I needed to bake the bread on my own I asked an employee where the baking pans were located. Unable to understand my request, either from a language or cultural barrier, she offered me a small loaf of bread and a box of tin foil.  Although not what I needed, I decided to buy the items anyway.

At the checkout counter, I was greeted by a girl not much older than I. She stood around my height, about 5-foot-4 with light brown hair that framed a face housing shockingly light blue eyes.

My total was small— £1.90. However, I was unable to pay it. After trying to run a number of my cards, the young girl informed me that my chip-less forms of payment would simply not work with their system. Disappointed, I set my bag of items on the counter. With no way to pay for what I wanted, I believed I was going to have to leave the store empty-handed.

As I was putting my wallet back into my bag and preparing to leave, the girl asked if I lived nearby. Cocking my head to the side and furrowing my brows, I pointed in the direction of the door and informed her that my flat was down the street, no more than a 10 minute walk. “You can just pay it back,” she told me as her mouth curved into a gentle smile.

I stood in front of the counter for several moments, dumbfounded. It took me a few seconds to understand what she had meant. Pay it back? The sentence itself isn’t a difficult one, yet I couldn’t seem to wrap my mind around the concept. The option to “pay back” is not one that is usually extended to customers, and one that I assumed would be taken advantage of if it was. After making sure that I could, in fact, take this bag of items that I had not payed for out of the store, I smiled at the young girl and continued my trip down Edgware Road.

Twenty minutes later, I walked back into the store, money in hand, and confidently approached the cashier. The young girl greeted me with a relieved smile— it was as if, though I was not the first person she had extended this offer to, I was the first to ever return to settle the debt. I paid my bill and as she reached out to return my change to me, her hand quickly dipped down into a box on the counter and scooped up a chocolate bar. “For keeping your promise,” she said, while holding the money and candy in an outstretched hand.

I walked home with a smile on my face. Nothing incredibly remarkable had happened — it was a simple day made up of a number of simple interlocking parts. However, this simple day had left me with a few simple thoughts: even if you’re sick, exploring a new place is never a waste of time; traveling isn’t all about hitting the biggest tourist attractions — sometimes a walk down an overlooked street and a moment of kindness from a stranger can be the highlight of your day; and doing the right thing always seems to pay off— not only will you feel good, but hey, you might just get some chocolate too.