Sitting Down with a Broadway Brit 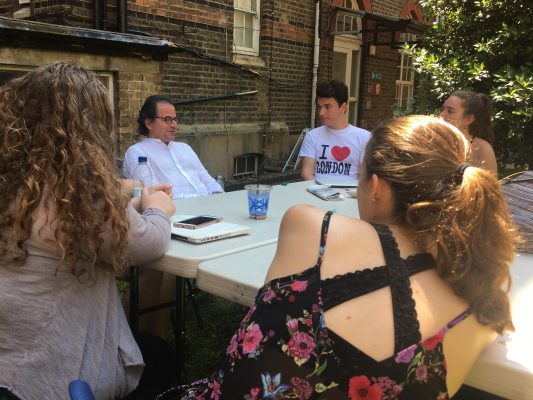 On a sunny June day, critic Matt Wolf stopped by Heythrop College to speak to our class bout all things theatre, both on Broadway and the West End. (ELIZABETH STONE/ THE OBSERVER)

Not a minute had passed sitting with theatre critic Matt Wolf before he, the group of Fordham students and I laughed about the touristy “I Heart London” shirt I had tried to avoid wearing that day. The man who moved from New York to London 33 years ago laughed again, saying: “Good, as do I.” Matt, a former theatre critic for Variety, currently writes for the International New York Times. He is also the London editor of Broadway.com and co-founder of The Arts Desk website. On the toasty afternoon of June 20, he sat down with our Fordham London Travel Writing class and answered our questions about himself and his views on theatre, both in London and New York.

Matt began by calling himself a “Broadway Baby.” He grew up in New York seeing shows with his parents and had loved theatre from a very young age. I first asked him what had interested him in pursuing theatre criticism as opposed to another part of the theatre. In looking back on his childhood he recollected, “I did do a little bit of theatre just because, you know, when you’re a kid, everyone does a little bit. I think it’s symbolic that in most of the theatre I did when I had to do theatre, I was cast in the role of the narrator, if there was one. If you think about it, the narrator is kind of the critic of the occasion.”

At a young age, he developed his passion for the performing arts and knew he wanted to do something with it. “For one thing, I had a passion for going. The passion of going to theatre was something I had, not to be a practitioner, but to experience it. So what am I going to do with this? Is it just going to be a hobby? This is a question I asked myself at age 13.” He went on to review theatre for his high school and college newspapers, until he graduated Yale and decided to hop to the other side of the Atlantic. He came to London with a student work visa, intending to stay and enjoy the town for a few months. “What happened against all expectation is that I managed to sort of put together a career for myself here as a theatre critic and journalist. So the six months became 33 years, with no end in sight.”

As students from New York, we were both intrigued by and jealous of this man who not only flies between New York and London for the best of theatre, but also gets paid to do it. In comparing the two cities, Wolf made sure to state that he had no ill thoughts or prejudices about one theatre empire over the other. “I think what I wanted when I first came to London was to just add, it wasn’t in any way turning my back on New York, far from it. It was adding London to the mix, not shutting New York out of the mix.”

Matt began to explain the differences between the Broadway and West End stages, painting two very different pictures. “I suppose Broadway and the West End are synonymous in terms of what they represent. They both represent commercial theatre with lots of dollar signs or pound signs attached. However, Broadway is just much, much more costly in every way. But where it gets very different is the separation between Off-Broadway and Off-West End/Fringe, where you have another whole component really in London that increasingly doesn’t exist in New York or in the U.S., which is the state funded theatre, the state subsidized theatre.”

Wolf described how London’s “state-funded theatre operates on what’s called an ‘arm’s-length principle.’” London has what is called the Arts Council England, or ACE. “They give the money without regard for whatever the production is. They are not implicitly approving or disapproving of the productions that the theatre puts on.” He noted that he thought this was important for theatre in the modern day. With all of the possible upcoming arts budget cuts in the United States, he gave strong reason to the separation of theatre funding and theatre programming. He gave a current example why: “You may have been reading about this production of Julius Caesar in Central Park in New York which was very controversial because Caesar and Calpurnia, Caesar’s wife, were played as versions of Donald and Melania Trump. As a result, three different funding entities of the New York Shakespeare Festival, including Delta and Bank of America, announced that they were going to withdraw funding, not just from that production, but from the New York Shakespeare Festival and The Public Theatre.”

Funding wasn’t the only tie between the stage and money that the class was interested in. As young students who love theatre, we have complained many a time about the ridiculous prices attached to high-end theatre tickets. I asked Wolf his opinion on prices and their effects on younger audiences’ theatre. He struck a chord when he began before I’d even finished my question, “I think it’s a huge problem. I think it’s disgraceful.” He related to us as we all ranted about Broadway’s ticket prices. “What’s really happened is that the Broadway theatre has become a special occasion kind of theatre, and everyone regards it as that. That’s one of the reasons why the prices are never going to go down, they’re only going to go up, because, in the producers’ mindsets, if you’ve got a special occasion entity, which Broadway is, then there are seriously no price barriers.” He concluded by discussing his own experience seeing Broadway shows. “I go to so many things in New York and I’m not that young anymore, but I often feel when I’m at a play in New York that I lower the median age of the average person there by 20 years. I think that American students here really feel that.”

As Matt informed us, prices don’t only have a major influence over the audiences who see them in New York. “The shows that win the Tonys jack up their ticket prices like ‘Hello, Dolly’, and the shows that don’t win their Tonys like ‘Sweat’ or ‘Six Degrees of Separation’ announce their closing notice within days of the Tonys. You can’t afford in New York to have a ‘nervous hit,’ a show that’s just about hanging on. Here you can have a show that’s just about hanging on for decades.”

The big prices actually run which shows gets “kicked off the island” in Manhattan, and which ones get to stay. “I would say the biggest difference in terms of what’s on between the two cities, and one of the reasons I was very drawn to London as a theatre capital, is that London has a much greater emphasis on the classics.” Matt then joked about shows like “The Mousetrap,” a play that has been running for 64 years making it a staple in London theatre, would never last in New York. “Where New York is definitely stronger, and will always be, is the musical theatre culture.”

He then tied this back to his own personal role in the world of theatre, noting that the two theatre capitals seem worlds apart in regards to criticism. In September 2009, Matt co-founded The Arts Desk, a theatre review website that he and his colleagues write for. “The point of The Arts Desk, almost eight years ago, is even more important now. What we wanted to do was fill the void that’s been left by the collapse of critics in papers across America. Basically, New York is hemorrhaging critics.” He explained that critics, or lack thereof, truly have a huge impact on what audiences see and avoid seeing. “New York has long been considered a ‘one-newspaper’ town, and as a result a ‘one-critic’ town. Very often when people in the business talk about the reviews in New York, a new show opens, and they will say, ‘How was the review?’. Singular. By which they, in effect, mean, how was the New York Times review. Now, that wouldn’t happen here, because if I said to you, ‘How was the review?’, you would quite rightly say, ‘Well which one? Do you mean The Guardian? The Times? The Telegraph? The Financial Times? Time Out? The Spectator? Metro?’ and the answer is, ‘Exactly.’”

As we said our goodbyes, Matt asked which shows we’d seen so far, and gave us a few of his own recommendations as well. We were told to “Be the best audience we can be,” and sent us off with new perceptions of the world of theatre. Matt then said if we came back anytime soon, he’d be glad to get together and chat theatre with any one of us. He then left to go to an evening performance of a show untold to us, preparing to be the best audience he could be.