Life, Love and London with Joe Aaron Reid of “Dreamgirls” 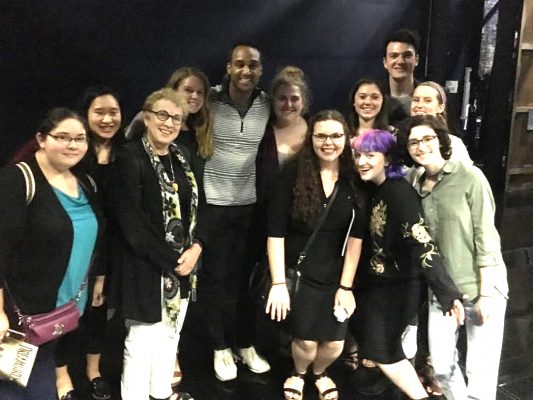 The stage of the Savoy Theater is dark and silent, worlds different from how it was a mere 15 minutes before when it was filled with buoyant show tunes and lit up with brightly colored set pieces. I am backstage waiting to meet Joe Aaron Reid, the American-born performer who is now making a name for himself on London’s West End as Curtis Taylor Jr. in “Dreamgirls,” which has been on stage for six  months and will be moving to New York in 2018. The darkened stage is warm, so warm that I can’t even imagine what it must feel like for Reid, who at one point in the show must wear two full suits at one time because there is no time for a costume change.  Our class is in the middle of a behind-the-scenes tour of “Dreamgirls,” complete with an up-close look at the sets, costumes and wigs, when Reid appears, smiling and full of energy despite just having completed a rigorous performance.

At over six feet tall, Reid towers over my 5-foot-4 frame. He strides onto the stage, greeting our class and thanking us for coming to see the show, as if we aren’t the ones who should be thanking him instead. As the male lead, Reid spends the majority of the two hour and 40 minute show dancing and singing, with almost no breaks. But, it is past 10:30 p.m., and despite his overwhelming energy, Reid must head back home to his husband and two children. We briefly chatted and hugged goodbye, making plans to meet a few days later for a more in-depth conversation.

When we meet a few days later at Grind, a trendy a coffeehouse near the theatre—he obligingly made room for me in between his vocal lesson and evening performance— he told me his life story. Although  he comes from a musical family (his father plays the piano, organ and drums), Reid never thought about a career in the theater as a child. “I didn’t know anything about the theater when I was younger. I had done a play in second grade, where I had suffered from stage fright and didn’t want to deal with it at all,” Reid said while shaking his head and laughing at the memory. His love for performing started a few years later. “When I got to middle school, they were doing a production, which is probably illegal, of ‘Newsies.’ I was like, ‘Oh, that seems fun. Everyone else is trying out for this thing called ‘Newsies,’ I’ll try and see.’”

Reid auditioned, scored a part in “Newsies”  and has never looked back.  “Musicals are where my love for performing really started,” he said. “ I was 12 and I got to act and sing, and I’ve always been an acrobat, so I would tumble. I was just putting everything that I really liked into one thing. The more that I did it the more my love for it grew. My parents could obviously see my love for it was growing so they kind of kept pushing me to do it and here we are.”

Less than 24 hours after receiving his diploma from Ithaca College in 2005, Reid began working as a professional actor. “I graduated on a Sunday and then that night I flew to New York. The next morning, I started rehearsals for ‘Ragtime’ as the understudy  for Coalhouse. There was no turnover,” he recalled. While Reid never had the opportunity to go on for Coalhouse at New Jersey’s Paper Mill Playhouse, a few years later he got the next best thing: crossing the Hudson to work with the man who created the role.

“I’ll never forget— My very first job in New York City was ‘Kismet’ at City Center Encores!  I show up for the first day of rehearsal and we’re waiting in line to get our scripts. I turn around and the next person in line is Brian Stokes Mitchell, who originated Coalhouse on Broadway.  I just got HOT. Like I remember sweat just started pouring down my face.”

Reid’s words tumble out faster and his arm movements get larger as he recalls the excitement he felt. “‘Ragtime’ is my dream show, right? Here I am, a newbie to the city, working with my idol and Marin Mazzie, who originated ‘Mother’ in ‘Ragtime! He probably wouldn’t even remember all of this, but for me it was life changing because you grow up thinking, ‘okay I hope I make it someday’ and then you’re sitting and having lunch with the person you’ve always looked up to. It doesn’t get better than that.”

Joe Aaron Reid LOVES his job. He recounts stories from his past with such excitement, sincerity and humility that you would think each story is about the greatest moment of his life. That’s because for Reid, it is. Dressed casually in a tank top to beat the unusually hot London weather, he has come straight from a vocal lesson and will leave this interview to prepare for the night’s performance. This is how his days are spent—bouncing from obligation to obligation without a hint of resentment.

It’s hard to imagine the man sitting before me ever being anything other than cheerful and buoyant, but then I ask about his transition to London. His smile dims, like he is reflecting on a painful memory, and the tone of his voice becomes more serious. “I gotta tell you, the transition was probably one of the roughest times for me,” Reid tells me. After hearing his story, I realize there was no transition.  Having just closed “If/Then” on Broadway,  Reid moved  to London  four days later with his husband, who was starting a new job,  and their then two-month-old twins.

“When you close a show, you need a little bit of time for closure. I didn’t have that. You want to be able to bask in the glow of ‘Wow, I just finished a chapter of my life that I loved.’”  It turned out to be a hard time.  Reid had no time to savor his past,  a present filled with the stresses of setting up a new household and, on top of it,  no future plans in place. “When I moved here, I had no friends. I had no agent, no job, no prospects. It was an emotion overload,” he recalled.

“I got to a point where I was like ‘Okay Joe, you’re emotional and this is a trying time for you, but if you came to be here and to do what it is that you want to do, then you’ve got to get up and you’ve got to start doing something.’ And so, I got up and I started going to the gym, we had the au pair (nanny) start and I began reaching out to people that I didn’t know to make connections. I was able to get in touch with an agent and then everything just kind of started to fall into place, but it was one of those things had I not made a move, nothing would have happened. As hard as it was at some moments, it was all worth it.”

Stopping our conversation briefly to thank the barista for his iced coffee, Reid shrugs his shoulders and laughs, making a joke about how with a set of twins “in the thick of the terrible twos,” he needs the afternoon pick me up. I asked Reid if he has brought his kids to see him perform, to which he laughs and  shakes his head no. “I don’t know that I would put anyone in the audience through that. There’s only so much embarrassment that you can take as a parent,” he jokes.

However, all jokes aside, Reid spends as much time with his children as he can. Being a working actor and a parent is a difficult act to balance, especially for someone like Reid who loves his career. “It’s hard. You want nothing more in the world than to be with your children as much as you can be with them. You’re basically torn between two loves. It’s the life that we have created, so I just try to do the best that I can,” he explains.

The longer I sit here with Reid, listening to him crack jokes  through exuberant laughter about getting hand, foot and mouth disease (he can thank the twins for that one),  I can’t help but wonder how he is able to transform into the Curtis, the shady bad guy of “Dreamgirls,” every night.

“It’s funny because I don’t feel that he is evil. When you think about the villain of the piece, and this is going way beyond what we present to you at night, [it] isn’t really Curtis. The real villain of the piece is the 1960s and 70s. It’s racism,” Reid says.

“At the beginning of the show Curtis really does try to play by the rules. Sure, he does some shady things here and there. He doesn’t always go about things the right way, but everything is really setup to benefit everyone. I think throughout the show, audiences included, people forget that he’s not the only one that does shady things. Like Effie—Effie doesn’t get kicked out of the group because she’s heavy or because she’s darker skinned. She gets kicked out of the group because she stopped showing up for rehearsal. And Jimmy Early—I’ve been booed walking off the rap with Jimmy. Sometimes I just wanna stop and go back onstage and be like ‘Hold on a second, why are you booing me? He just pulled his pants down in the middle of an act. He’s been cheating on his wife for this entire show and you’re gonna boo me? Come on!’ It’s easy to label Curtis the villain, but I think he’s a bit misunderstood.”

While he may be going into his dressing room at the Savoy today, who knows what the future holds. With “Dreamgirls” slated to return to New York City next year, Reid might be next seen walking down Broadway to a new theater. But after a challenging move the first time around, would he be willing to return to the States, this time with toddlers? “I mean it’s New York, it’s my home. I’ve got all my friends and family there and being a leading man on Broadway has always been my dream,” Reid said with his trademark smile.  “I love what I do. I’ve worked my whole life to do what I do and when I get on stage, I come alive.”