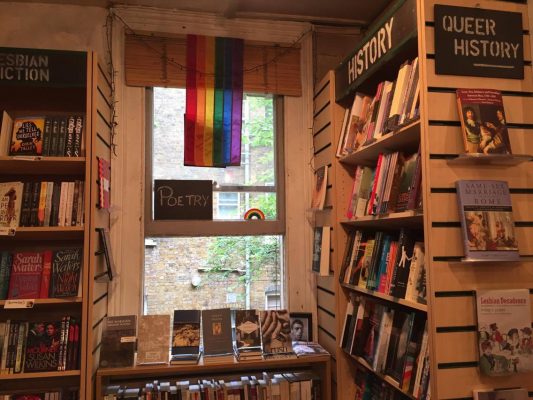 The interior of Gay's the Word bookstore, London's only gay bookstore. (CALLAN MCCARTHY/ THE OBSERVER)

One late spring evening, I found myself onstage in the Hackney Attic in East London, facing a crowd of strangers. I stood on a small square stage, acutely aware of the many pairs of eyes scanning my bare face and messy hair. The stage lights blinded me as I looked over the room. All I could see were the hazy outlines of faces staring up at me, cloaked in shadow. My arms grew hot underneath my denim jacket, and I held them to my sides to stop myself from fidgeting. I took a deep breath, laughed nervously into the microphone, and began to tell my story.

I was standing onstage at Spark London, a true storytelling event. Twice a month, residents and visitors of London gather together for an evening of drinks, animated conversation and heartfelt stories. Everyone who steps onstage has a maximum of five minutes to tell a true story, be it humorous, serious, or anything in between. As the host Dave Pickering bounced onstage and welcomed us all warmly, he announced in a lively voice that the theme of the night was “adulthood and coming of age.” Dave explained the origin of Spark’s name, saying: “Stories spark stories in other people.”

Each story had moments of soaring humor and quiet contemplation. By the end of the first act, I had heard four different stories that left me marveling at the bravery and flawed humanity of each participating storyteller. I forgot thoughts of personal problems that stuck to my conscious mind with anxiety-inducing immediacy, and instead began to wonder what I would say if I had the chance. When Dave announced that there were still free spots to sign up, I suddenly realized that I had a story of my own ready to recount, gathering like a storm cloud in my mind. At the second intermission, I finished my pint, gathered my wits and marched over to write my name down. I had obtained the last free spot available, and I awaited my time with nervous excitement.

After my name was called and Dave adjusted the mic for me, I launched into a narrative that I had never explained so publicly before. I spoke about my sexuality, something I’ve struggled with throughout my entire college career. A crush on a woman I was close with at the beginning of my freshman year told me that I wasn’t straight like I thought I was, but it took me several years to understand why or how.

I remembered coming out to my then boyfriend this past fall, who understood my bisexuality on a base level but didn’t seem to care enough to support me the way I expected. I remember hearing slight discomfort and disgust coloring his voice as we spoke on the phone and he tried to understand how significantly I felt about my discovery: “I called him up, and I told him I was bisexual. And he says, ‘how do you know?’ and I said, ‘how do you know you like women?’ and he asked again, ‘but how do you know?’ and he just didn’t get it.” I talked about coming out to my mom, who initially seemed so confused by what I said: “she asked me, ‘so were you cheating on your boyfriend with a woman?’” Though both my parents are incredibly supportive now and understand me much better after several conversations about my bisexuality, I described how difficult it was to face that disconnect.

I lamented how lost I felt upon realizing that I was bisexual, feeling cursed to walk the grey area between gay and straight spaces, joking that: “If you’re bisexual or you know anyone who’s bisexual, you often find yourself straddling the line, where straight people say ‘you’re not really one of us,’ and gay people say ‘you’re not really one of us.’” I articulated this point by recalling a recent trip to a lesbian bar in the Soho area of London with my friend Nadine. It was our first time in a lesbian-only bar, and I was adjusting to being in a space that was unfamiliar to me.

Everything about interacting with women in a romantic or sexual way was brand new to me: “Do I look straight? Do I look gay? Do I look bi? I’ve never been in a room with all women. How do I approach them?” I reached the most important point of my story, where one of the lesbians there asked us if we were gay or straight: “I said, ‘Well, I’m bi.’ That sucks! Why am I apologetic about that? But I go, ‘I’m bi.’ And she goes, ‘Pfft! Get out of here.’” I remember the two of us trying to salvage the rest of our night and instead deciding to call it quits and head back home. I recounted Nadine’s fiercely loyal words as we rode the tube back to our flats late that night, dejected and confused: “If we don’t have solidarity between bi women and lesbians, what do we have?”

As I explored my own story, I could feel that the audience was as attentive as I had been while listening to the stories before mine. I’m not out with extended family or anyone besides close friends and my parents, and this experience was both healing and slightly terrifying for that reason. It’s difficult to navigate the tricky circumstances of acceptance when you realize that some part of you, still hidden, will be seen by society as “other.” Yet, the fact that I got up to tell such a revealing story speaks to the air of understanding and safety that I felt in the room that night.

Adulthood, I realized as I stumbled through my story, means carving my own space out of the world as I move forward. It means that I must listen to what I say to myself, even when I try and stifle the most central parts of me that seem unlovable or unacceptable: “You think you know yourself, and you ignore all the signs. I was telling myself ‘I like that girl, I’m attracted to that girl.'”

As soon as that woman told me I didn’t belong in that space, I was like, you know what? No. I do. Just because I’m bisexual, doesn’t mean you have a reason to mistrust me. The more I listen to things and stop and pay attention, the more I uncover things about myself that were there the whole time that I just didn’t want to see.”

As my five minutes ended and I returned to my seat, I realized how profound and needed the Spark community was.

After the event, as my fellow storytellers flocked around myself and others to give hugs, handshakes and supporting words, I stood with a dazed yet exhilarated expression on my face. Speaking publicly forced me to be honest with myself. It made me realize that I’m keeping a part of my life and who I am in darkness, and only a few people close to me are aware of it. Who I love, who I’m attracted to, how I view myself in the context of society; it all starts with how I identify. Sometimes it’s terrifying to search for truth when it feels as if truth can only bring pain and weakness. Despite this fear, I find myself now craving the need to live authentically to the beliefs in my heart. Through the first very public explanation of my own story, I found power in my truth.