A Weekend in Paris 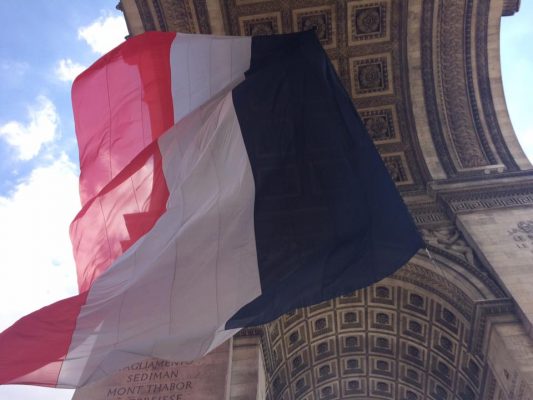 A large French flag waves in the wind from the center of the Arc de Triomphe. (MORGAN STEWARD/ THE OBSERVER)

Paris, France. The city of love, lights and college students satisfying their wanderlust by backpacking across Europe. I was one of those students. Abroad for the first time in London taking a summer class, I couldn’t pass up the opportunity to travel during the first long weekend of the course. Eager to fill my bare passport with more stamps, I took the train through the Chunnel (the nickname for the tunnel that runs underneath the English Channel) to Paris with two friends where we had just 48 hours to conquer the city.

12 p.m.: We arrived at Paris’ Gare du Nord station, where we walked down the Rue de Dunkerque to St. Christopher’s Inn, our home for the next two days. The hostel had everything one could want and more: comfy beds, a personal charging station in each bunk and a locker underneath the beds for visitors to store their belongings. Most importantly, while the neighborhood surrounding the hostel was not stellar, the building itself felt incredibly safe. A security guard is stationed at the entrance 24 hours a day and you are required to swipe a room key to use the elevator and enter each door.

1 p.m.: Tired and hungry, we arrived at our first destination, Le Pré Verre. The small café is located in Paris’ Latin Quarter, what I would describe as the Greenwich Village of Paris. Despite the undeniable gentrification that has taken over the area, the Latin Quarter has still managed to retain some of its former bohemian identity. We found ourselves eating amongst university students or finely dressed Parisians locked in intense dialogue about what I could only image was something pressing. We were able to experience a true French three course meal at Le Pré Verre: an appetizer of goat cheese and eggplant ravioli, Potatoes Anna as the main dish and chocolate truffle and molasses ice cream for dessert for only €33. The three courses were served in true extravagant European fashion, spread out with a fresh bread basket delivered after each course. Another plus of the restaurant was that much of the wait staff knew some amount of English, so communicating was not as difficult as I had been expecting.

3:30 p.m.: After devouring our lunch, we decided to walk off our food by visiting Notre-Dame Cathedral. The walk to the cathedral, while long, provided us with an excellent opportunity to view more of the city’s stunning architecture. As we crossed the Seine River onto the Île de la Cité, an island in the middle of the river where Notre-Dame is located, I was absolutely blown away by how ornate the building was. The first thing I noticed when entering the building was the huge stained glass windows that hung in every corner of the building. The sun seemed to hit the colors perfectly, illuminating the windows in a dazzling rainbow. After taking our time to visit every section of the building, I said a quick prayer and lit a candle before we left to go on our next adventure.

7 p.m.: Stopping at the hostel briefly to drop off our backpacks, we ventured out into the city again, this time to The Louvre. Located on the Right Bank of the river Seine, the famous museum is free for young adults aged 18–25 every Friday from 6 p.m. until closing. It wasn’t until we entered the museum that I truly understood how massive it is. As we were later informed, if we were to walk to every gallery of the museum, we would have traveled the same distance as a semi-marathon. Although The Louvre is home to thousands of priceless artifacts, there was one particular painting that I couldn’t wait to see: the “Mona Lisa.” After trying to locate the painting for over an hour, we finally found her not by following the map, but by the throng of people. Once entering the gallery, it took several minutes just to catch a glimpse of the “Mona Lisa” as tourists from around the world were gathered around to take a selfie with one of the world’s most famous ladies. When I finally pushed my way to the front, I was underwhelmed by what I saw. “This can’t be the ‘Mona Lisa,’” I thought to myself. The painting was much smaller than I envisioned, hardly bigger than a standard size of printer paper. I was shocked—given the painting’s reputation, I assumed it must be grandiose like most other famous paintings. Instead, I was staring at a tiny square, so small that I was afraid if I blinked I would miss it.

10 a.m.: After eating the complimentary breakfast provided at the hostel, we made our way to the Jardin de Tuileries, the garden where The Avenue des Champs-Élysées begins. The garden itself is beautiful and green, bustling with tourists eager to walk down one of Paris’ most famous avenues. Before starting down the 1.9-kilometer trek that ends at the Arc de Triomphe, I bought a cold vanilla ice cream cone to cool myself down in the already scorching sun. Ice cream cone in hand, I embarked down the dusty trail that would take me past some of Paris’ most high-scale shops. My favorite store that we passed, however, had to be the Abercrombie and Fitch. With an opulent gold gate leading to a green garden and its own security guard, the outside looked more like a castle entrance than a teenage clothing store.

11 a.m.: Arriving at the Arc de Triomphe, the first thing I noticed was not the monument itself, but the giant French flag hanging from its center. Scenes from Les Misérables immediately popped into my mind and I couldn’t help but wonder if the arc would have been utilized in the French Revolution if it were constructed at the time.

11:45 a.m.: We walked back down to the Musée Rodin, home to the famous sculptures The Thinker and The Kiss by French sculptor Auguste Rodin. Not familiar with any of the other priceless works housed here, we left promptly for what is undoubtedly the most popular monument in Paris: the Eiffel Tower.

1:30 p.m.: After getting lost, finding our way, then getting lost again, we finally arrived at the Eiffel Tower. While I knew the monument was large, I was not prepared for just how massive it was. While visitors are allowed to visit the very top point of the 128-year-old structure, I am deathly afraid of heights and opted instead to walk across the roundabout to find a shady spot to sit in front of the Paris Aquarium. I was joined by my companions and we laid in the grass, giving our sore feet a rest, talking about our thoughts on the city so far.

2:30 p.m.: As we got up to leave, I noticed that several people were walking towards us soaking wet. With not a cloud in sight, I was curious as to how these people, mostly children, could have managed to drench themselves. Walking towards the direction the mysterious, wet strangers were coming from, we found the answer. Across from the Eiffel Tower lies the Place du Trocadero, the site of the Palais de Chaillot. In front of the palace is a giant fountain, one that locals and tourists alike have started to use as a public swimming pool. While we did not have swimsuits to fully join in on the fun, we were able to sit on the edge of the structure and dangle our feet into the refreshing cold water. We sat there for hours, looking at the tower and talking while soaking up with warm summer sun.

9 p.m.: After delicious pastries from Maison Lallement followed by a casual dinner at Casa Pizza, we headed back to the Eiffel Tower where we boarded a boat cruise down the Seine river. The sun did not set until 9:47 p.m., so this cruise was at the perfect time to see the beautiful city in a different light. Our return was timed perfectly, as we arrived back at the tower just as it started to light up for the night.

10 p.m.: After leaving the boat, we headed back towards the aquarium to another food stand to purchase crepes and some cold drinks. Food and beverages in hand, we found a spot on the lawn in front of the fountain to wait for the light show to begin. Every hour on the hour after nightfall, the Eiffel Tower has a five-minute-long light show where bright white lights flash on top of the monument’s normal golden light. The show wouldn’t begin until 11 p.m., so we sat, chatting, listening to music and eating dessert until then.

12 p.m.: Before leaving for the train station, I had one last thing on my agenda: visiting the Galeries Lafayette. While I had seen many incredible views of Paris from the streets already, I wanted to try a view from up high. We headed to the Galeries Lafayette, a giant department store in central Paris home to one of the city’s best hidden secrets: a free rooftop view. Upon entering the department store, visitors can take the escalators up to the six floor, where they are then met with a set of stairs. The stairs lead to a rooftop terrace with views of almost every major landmark in the city. Because this is not a very well-known fact, the terrace was pretty empty so my friends and I were able to move about freely without worrying of getting our views blocked.

2 p.m.: Boarding the Eurostar back to London, I was left with mixed feelings of sadness and relief. Although I was utterly exhausted from my whirlwind excursion to France, I was happy to have been able to experience the magic of this wonderful city.