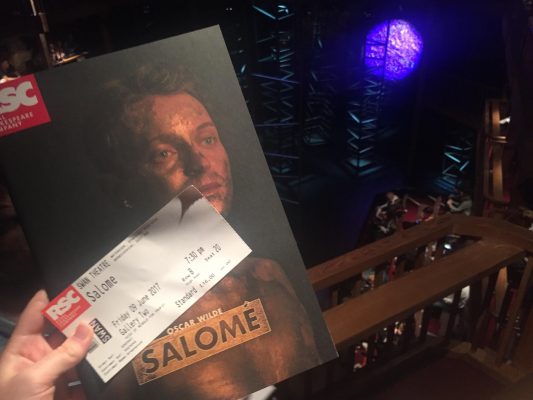 Oscar Wilde's "Salomé" can be seen in Stratford-upon-Avon at the Royal Shakespeare Company's Swan Theatre until Sept. 6. (IZZI DUPREY/ THE OBSERVER)

As red lights and guitar chords exploded over the stage, the Royal Shakespeare Company (RSC)’s “Salomé” made me forget the Shakespearean theatre and feel as if I’d sat down in a Freddy Mercury concert. Far from the stockings and pantaloons one would expect to see in a Shakespearean theatre, this production has its characters strutting the stage clad in leather and lace.

The tone is set from the start with provocative Ilan Evans singing the Perfume Genius lyrics “Don’t you know your Queen?” The music of solo indie rock artist, Perfume Genius, is woven throughout the production, electrifying both cast and audience. As well as the music, the sex also constantly steps itself up, as we follow Matthew Tennyson’s unconventional Salomé in a dress and heels.

From the start, the audience is to understand that this production has a male in Salomé’s traditionally female part, but the show is not a genderbend. The rest of the cast still addresses Salomé as “she” and “her,” and the character is portrayed as a genderfluid or genderqueer person, rather than transexual. Oscar Wilde’s biblical play is still told using the traditional script: the stepdaughter of King Herod, Salomé, seeks and begs for the love of Iokanaan (played by the scantily-clad Gavin Fowler). At the same time, Herod wants Salomé to dance naked for him. In return, Salomé makes King Herod (Matthew Pidgeon) give her the decapitated head of Iokanaan, her obsession.

Director Owen Horsley celebrates and takes inspiration from England’s 50th anniversary of decriminalizing homosexuality. Horsley adapts “Salomé” not to focus in on homosexuality, but instead to explore gender fluidity, a theme not discussed enough in the theatre. Evans, in the role of the Singer, changes garb throughout the show, wearing clothes that highlight at different moments both his masculinity and femininity.

Horsley’s production addresses a wide range of important issues in a very brief 90 minute, one-act production. I applaud him for fitting so much into what felt like a very short amount of time, while not making it feel overcrowded. Wilde’s characters had me considering deep themes as well as wanting to dance with them onstage. In Salomé’s dance of the seven veils for Herod, the stage was pulsing with movement and bass. I enjoyed it so much, I started giggling with excitement when veils rained from the the top of the theatre. Salomé is fully naked by the end of her dance for the King, and though the room was silent, the audience’s energy filled the space with shock and interest.

The sex and the rock ‘n’ roll keep the audience enticed throughout the show, but an eerie silence falls the moment Salomé makes her request of Herod. The RSC puts on a strong revival and keeps alive what might otherwise be an out of date and slow play. Oscar Wilde’s “Salomé” has been used to bite into many different cultural issues throughout the years, from homosexuality to female empowerment. Horsley’s production does not fail to entertain, while also shedding light on the frontier for the next battle of equality.

“Salomé” plays at the RSC’s Swan Theatre until September 6.