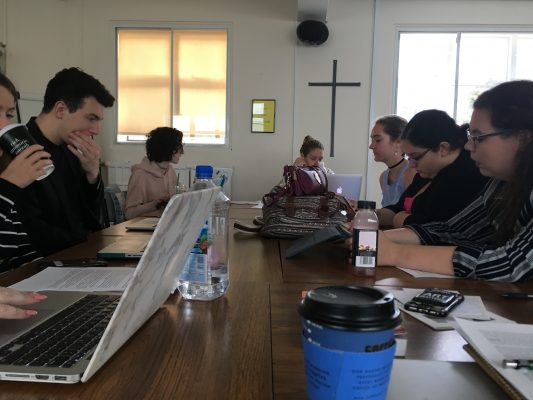 Monday, June 5 was set to be an exciting  day for the nine of us. All Fordham students, some at Fordham College at Lincoln Center (FCLC) others from Fordham College at Rose Hill (FCRH), were to report to Heythrop College in Kensington, London for our first day of class as part of Fordham’s Study Abroad program. There was plenty to be excited about—we were in London for an entire month taking a travel writing course that provided and organized excursions to various parts of this foreign city. However, sitting as a group around our makeshift boardroom table, we began to discuss topics much more serious than travel writing: terrorism.

After an hour or two of talking about strong verbs and vivid language, our professor Elizabeth Stone asked us if we thought terrorism was a suitable topic to cover in class. Two days earlier, terrorists had rammed their van into pedestrians crossing the London Bridge before running from the vehicle, knives in hand, stabbing visitors in Borough Market located just off the base of the bridge. Within minutes, seven were dead and 48 injured. I could have been one of them.

That Saturday was a beautiful day in London. I spent my day basking in the summer sun, enthusiastically exploring the city. I had walked across London Bridge twice, stopping to take goofy selfies with some of my classmates before strolling through Borough Market. It was hard to imagine that at some point throughout the day, we had all been anywhere from three miles to three feet from where the terrorist acts occurred.

Now, everyone began to candidly discuss their thoughts on the attack. The most striking differences in each individual’s narratives were the reactions to fear—an emotion everyone registers, yet expresses differently. Miranda Powers, FCRH ‘19, was still in shock, commenting “the idea that what happened could have been a terrorist attack didn’t occur to me. I assumed it was just an accident.” Others felt oddly disconnected from the incident, like Elizabeth Stone, professor of English, who said as a New Yorker, she was used to it. Teaching at Fordham since 1982, Stone had been 20 minutes from the Twin Towers when they collapsed on 9/11. With a slight shrug, she declared, “I never win lotteries, so why would I lose one?”

Many students laughed and agreed, albeit not as brazenly, with their professor’s declaration of fearlessness. “You can’t be paralyzed by fear,” Nadine Santoro, FCRH ‘18, stated to the group.“I would just constantly be having an anxiety attack if I consciously wrapped my head around the fact that I could die randomly at any moment.”

Callan McCarthy, FCRH ‘18, agreed with Santoro, adding “I could hideaway in my flat and die of a carbon monoxide issue.”

“I don’t know if I would go back to Borough Market,” Karalee Rogers, FCRH ‘19, quietly offered from the opposite end of the table, sparking a debate about the likelihood of attacks happening at the same place twice.

“I would,” McCarthy said emphatically. “I’m not going to live my life in anticipation of my death.” Similarly, Santoro remarked that “it’s almost ironically safer now because they’re not going to hit the same spot days after they just did.” But, Deirdre McGrath, FCRH ‘18, agreed with Rogers, telling the group that not only would she not go back to the area immediately, but that she considered not even coming to London after the terrorist bombing in Manchester on May 22, just days before we were set to arrive.

“You need to be smart. You don’t need to live in fear, but you also don’t have to put yourself in a situation where you can be subjected to something like that,” McGrath reflected. Izzi Duprey, FCLC ‘20, agreed, telling the group that she and some fellow classmates, including myself, canceled plans to visit Buckingham Palace the day after the attacks occurred. “I think we definitely will [go] eventually,” Duprey said of the planned visit to see the Queen, “we just didn’t want to go the day after. We were more wary than we normally would have been.”

The conversation revealed another similarity between McGrath and Duprey— their parents had reservations about them traveling to London after the attack in Manchester. This differed greatly from Thomas Zachar’s, FCLC ‘20, parents. “I was actually shocked because I called my family and told them that I was staying literally a block from where it had happened for the past four days and that we were just there that day. Their reaction was just like ‘Well, okay. Good thing you weren’t there,’” he said.

Adding some much needed comic relief to the class’s heavy discussion, Erika Ortiz, FCLC ‘18, who had previously remained silent, dryly shared with the group that “my parents had the discussion just for the sake of having the discussion.”

In the few days following the incident, American media has covered what is being dubbed “The Attack on London” aggressively. Being in London at the time of the incident, I half expected to wake up Sunday morning to a city with deserted streets save for armed guards patrolling the area. However, peeking out the window that day, I didn’t see an officer in sight. Buses whizzed  past, people on bicycles still weaved recklessly in and out of oncoming traffic and tourists could still be spotted with their selfie sticks wandering the city streets. The country that America had painted as “reeling” was on to business as usual.

Sitting in his office, Matthew Greenwood, Lincolnshire native and program coordinator at Fordham’s London Centre campus, spoke about the terrorist incident as if it was just your everyday morning chatter. “For the British, it was only 70 years ago that we were getting bombed by the Nazis, so something like this doesn’t really faze us. Obviously it’s worrying and it upsets us, but as far as making any meaningful change in our lives, it won’t do anything at all,” he nonchalantly remarked as he offered bananas to those present in the office.