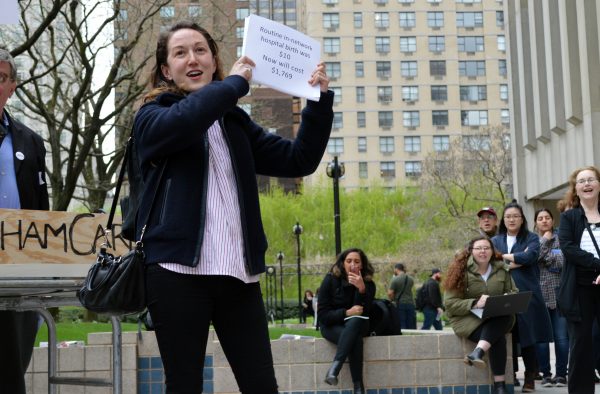 Assistant Professor of Comparative Literature Shonnie Enelow holds up a sign during the protest on April 19. (ELIZABETH LANDRY/The Observer)

On Friday, May 19, University President Joseph McShane announced through a campus-wide email that Fordham will not object to the unionization of adjunct faculty.

In the email, McShane said that after much “consultation and reflection” that included conversation with other Jesuits, he reached the decision not to oppose the actions of the adjunct faculty due to organized labor having “deep roots” in Catholic social justice teachings.

The decision to unionize comes after several months of events and conflicts involving administration and the adjunct faculty.

Unofficial organization Fordham Faculty United (FFU)  pushed to unionize in April, organizing public activism to draw attention and support for their cause. Due to Fordham’s legal representation opposition to their Service Employees International Union petition with the National Labor Relations Board, FFU withdrew their petition on April 3. They turned their efforts to a public campaign, one that became very active throughout the month.

The most recent demonstration occurred at the Rose Hill Campus in late April. The protest, organized to get McShane to publicly respond to the adjunct faculty’s efforts to unionize, led to an altercation between demonstrators and Public Safety supervisors that resulted in at least fourteen students being brought under sanctions.

During the April 8 Spring Preview, an annual showcase of the university, FFU held a rally trying to gain support, entering through the Atrium while prospective students were having lunch with student representatives. They exited through emergency doors, setting off the fire alarms and dispersing before a New York City Police department vehicle arrived and met with Public Safety.

The email also comes after months of conflict with a separate committee, the Faculty Senate. On April 19, faculty members completed a vote of no confidence, concluding that out of 488 faculty members who participated in voting, 431 no longer believed in the leadership of McShane. The voting was a result of months of negotiations between the university and the Faculty Senate, leading to claims that the administration had violated university statutes and resulting in staged demonstrations and silent protests.

“There simply are not funds enough to do everything we would like to do,” McShane said. “We do not yet know what the full impact of this decision will be, but I have asked our chief financial officer to ensure any additional funding required for adjunct salaries comes from areas that least affect our mission.”

McShane ended the email by mentioning those who spoke to him about the situation and saying that he was “sensitive” to the concerns raised by the Fordham community and “deeply” appreciates those who reached out.

“I would not have made this decision were it not the right thing to do, but in this case, popular opinion and the ethical choice were in harmony,” McShane said.