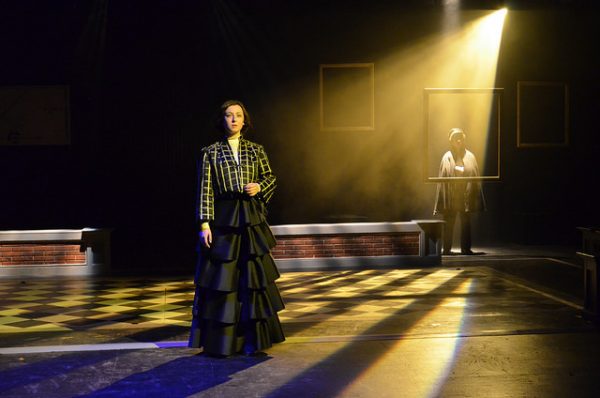 On Saturday, April 22, the Fordham Lincoln Center Theatre Program closed its final presentation of William Shakespeare’s “The Winter’s Tale.” Under the direction of George Drance, S.J., the Theatre Program ended its season celebrating the Dodransbicentennial of the University.

“The Winter’s Tale” follows Leontes, King of Sicilia, who is driven to madness upon seeing his wife interact with his friend, the king of Bohemia. He is convinced of her infidelity despite her late-term pregnancy with his child.  What ensues is jealousy, power-mongering and tragedy, which ultimately brings about repentance, joy and forgiveness.  What makes the Theatre Program’s production so unique is that it is set at the time of Fordham’s founding, with the two Italian kingdoms now set in New York City and Long Island.  The show, which ran from April 5-7 to April 20-22, concluded Fordham’s season of shows celebrating its monumental anniversary.

Drance is an artist-in-residence teacher within the Theatre Department who specializes in clown and improvisation, acting and collaboration.  Inspired by the 175th anniversary of Fordham’s founding, he took the creative initiative on this latest project and set Shakespeare’s “problem play” comedy in 1842 to honor the university-wide celebration.

“The world of Shakespeare’s ‘Winter’s Tale’ is one where age-old troubles echo throughout history,” Drance writes in the playbill.  He realized through rigorous research the concordance between the themes in this play and the principles upon which the university was founded: “goodness, reconciliation and new life.”  Drance made it his goal to “celebrate the tradition of theatre, to tell really important stories in every age” as well as impart on the audience “a sense of power of faith and forgiveness.”

Lighting designer and theatre professor Shaun Suchan agreed. “I hope that the audience is able to walk away with a positive outlook, whether that be about Fordham specifically or maybe something more personal to them.  It’s important to remember that we all can face adversity, sometimes from our own doing, sometimes not, and that there is always a path out,” Suchan said.

Ashley Everhart, Fordham College at Lincoln Center (FCLC) ’20 and Theatre Performance major, was featured as a Clown and Ensemble member in this performance.  “I had an amazing experience,” she said.  “I want people to remember the power of extreme, unbridled joy, even in the face of hardship.”

Suchan noted that the collaborative effort behind the production “is the foundation of what we teach in the theatre program” and that “this production was meant to be a celebration of not only the founding of Fordham, but who we are today.” The behind-the-scenes effort “added an extra level of excitement,” according to Suchan.  For instance, in order to bring the director’s vision to life, Suchan’s goal as the lighting designer was “to create an environment that parallels the destruction and fragmentation of Leontes’s life,” and as the play goes on, he added, “lighting [that] brings clarity and warmth.”

Indeed, the collaboration within each aspect of design beautifully created a minimalist set with fantastic costumes and an ambiance that captured the feel of a memory.  Just as Drance made note of the overarching themes of “goodness, reconciliation, and new life,” the play was an excellent portrayal of the principles the university was founded on and continues to uphold.

As for next year, Drance said, “I hope to continue to share with Fordham Theatre students the reverence that the Jesuits have always had for ‘ministries of the Word.’”  Suchan stated, “Next year’s season is currently in discussion with both students and faculty, and because we have such an open selection process, the productions are often not finalized by this point.”