An EPA Adversary Takes a Seat at Its Head 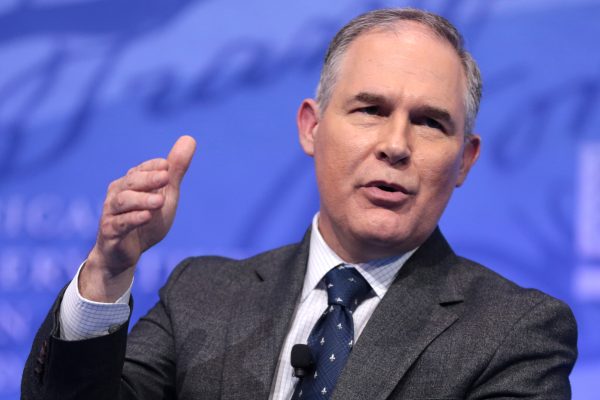 In the Pacific Islands of Kiribati, President Taneti Mamau faces unprecedented challenges. In the wake of rising sea levels, he and his people may be forced to relocate and become the world’s first climate refugees as their villages are becoming increasingly threatened by flooding. In a desperate attempt to house its potentially stranded citizens, the Kiribati government recently purchased 2,200 hectares of land in Fiji.

Vast amounts of research documenting rising air and oceanic temperatures render the idea of an anthropogenic climate change virtually unavoidable. Denying climate change not only worsens our ability to cope with future issues, but also invalidates the aforementioned people that are already suffering. In spite of this reality, the United States’ current political administration rejects both the existence of climate change and the importance of environmental conservation.

On Twitter, President Donald Trump famously described climate change as a concept “created by and for the Chinese in order to make U.S. manufacturing non-competitive.” This nonchalant imposition of his own opinions will have a direct impact on the future of environmental policy. In the New York Times, Coral Davenport described a hypothetical planet after the imposition of Trump’s anti-conservation policies as a place that “may have no way to avoid the most devastating consequences of global warming, including rising sea levels, extreme droughts and food shortages, and more powerful floods and storms.” These catastrophic events are becoming unavoidable in the eyes of devastated scientists, who have observed Trump’s eagerness to clog his administration with climate skeptics.

One of these skeptics is Scott Pruitt, an outspoken adversary of the Environmental Protection Agency (EPA)’s mission and activity, who was, naturally, President Trump’s first choice to become the new head of the agency. Angered by the EPA’s “invasive” regulations, Pruitt has sued the agency on 14 separate occasions, according to Eric Lipton and Coral Davenport of The New York Times. As the Attorney General of Oklahoma, he defined his career by attacking the government’s clean air and clean energy reforms for the sake of protecting states’ rights. These lawsuits also served to protect the liberty and profits of the energy companies that perpetrated the air pollution in question. Conveniently, these fossil fuel companies which include Exxon Mobil, Koch Industries, Murray Energy and Southern Company have donated $4.2 million to public organizations in which Pruitt holds position of authority. These donations were made in addition to their support of his lawsuits.

In his confirmation hearing, Pruitt admitted that he does not believe climate change is a “hoax created by the Chinese.” However, he did not show an ounce of urgency in his description of what needed to be done to conserve the welfare of the environment. When asked by Senator Sanders about his opinion on climate change, Pruitt merely stated that, “the human ability to measure with precision the extent of that impact is subject to continuing debate and dialogue, as well they should be.” This lackadaisical and impedimentary attitude makes Scott Pruitt an unconventional choice for such a crucial position in our government.

In a recent interview with CNBC, Pruitt also stated that he does not believe that carbon dioxide is a primary contributor to climate change. This not only contradicts science on its most basic level, but also the key mission of the EPA. Unfortunately, Pruitt’s message is consistent with the opinions of President Trump himself.

To an aspiring environmentalist, watching these processes unfold is demoralizing. I now have a president who has made me question the future of my career. “For those just entering the climate field or graduating soon, President-elect Donald Trump’s choices on funding and policy will set the tone for their careers,” Brian Kahn, a senior science writer at Climate Central, said in a Nov. 2016 article for Scientific American. To an undergraduate student of environmental studies, this is an undoubtedly alarming assertion. However, the desire of our future presidential administration to sweep environmental issues under the carpet only augments the urgency of the movement and boosts my own resolve.