Ailey Dancer Combines Her Love for Dance With Visual Arts 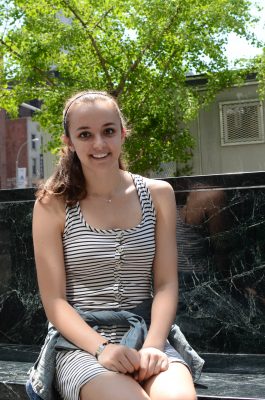 Freshman Sarah Takash expresses her creativity through dance and her passion for photography. (ERIN O'FLYNN/The Observer)

Despite having a busy schedule because of the Ailey dance program, Sarah Takash, Fordham College at Lincoln Center (FCLC) ’20, manages to make time to pursue a bachelor of arts in her second passion: photography. While working to become a dancer and join a company, Takash runs her own photography Instagram, @sarahtakashphotography, in the hopes of finding clients through social media. Because of her background and knowledge in dance, she mainly focuses on dance and performing arts photography.

“Photography shapes how I think now and orients my life,” Takash said. She first discovered her love for photography in the 8th grade when her class had no photos in the yearbook. She volunteered to take pictures and was lent a camera by her teacher. Once she began taking photos, she was hooked. She got her first digital camera for graduation that year, a Nikon 5100, which she still uses to this day. “Ever since then I look for pictures in everything. I’m always trying to compose things and figure out what I want to shoot,” she explained.

Takash had no idea she could pursue photography in her education journey. Once she began attending Communications High School, however, she started on the photography track and was guided by her teachers who encouraged her to continue in college. When applying to colleges, Takash looked for schools that would allow her to pursue both of her passions: photography and dance. This inspired her to attend Fordham University as an Ailey dancer and visual arts major with a concentration in photography. Despite the rigor of double majoring, her favorite part is that she is able to photograph dancers, thus tying both her passions into one.

Takash knew that from the beginning it would be difficult to do both, so she began taking core classes the summer before her freshman year to prepare for the fall semester. When the fall started, she began her Instagram account by taking photos of her fellow classmates in Ailey. “My favorite part of my first photoshoot was showing the dancers I had photographed the pictures I had taken and seeing how excited they were,” Takash said.

Not only has Takash been behind the lens, but she has also modeled for several dance photographers, including the well-known Ballet Zaida. The first time she shot with them she reached out, but the second time, the company reached out to her. “It was a super fun experience as a dancer, but I was also able to get tips from him as a photographer which added to my ideas,” she noted. Takash’s most recent photoshoot involved revealing the gritty side of dancers that isn’t seen as much in photography, mostly because dancers are posed in photos. She decided to focus on the transitional movements, rather than just the poses. “I was intrigued to take pictures you wouldn’t find when you Googled ‘ballerinas’ because it is a style that isn’t very explored and my only inspiration was what was in front of me in the moment,” she explained.

Takash’s favorite part about the visual arts program is that she can spend hours in the dark room developing her photos, while also being a part of Ailey, surrounded by dancers who have the same aspirations as she does. In the future, Takash said she hopes to get signed to a company and continue on with her photography as a side business. Since dance careers don’t last a lifetime, she hopes to have her photography to fall back on and continue to use as an outlet for her passions.