Fordham Reacts to “13 Reasons Why” 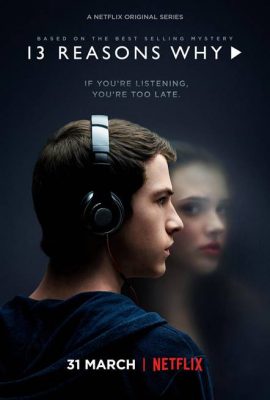 “13 Reasons Why” has generated heated debate on campus since its release on March 31. (COURTESY OF NETFLIX)

“13 Reasons Why” hit Netflix on March 31 and has since become a hot topic not just among Fordham students, but international audiences as well. “13 Reasons Why” tells the story of Hannah Baker (Katherine Langford), a girl who commits suicide and leaves behind a set of 13 cassette tapes through which she narrates the events leading up to her death. Each tape is assigned to a different character who has harmed Hannah in some way and is hence labeled as one of the “reasons why” she chose to end her life. One by one, the subjects must listen to Hannah’s tapes and then pass them onto the next subject or else a second set of tapes will be released, publicly exposing everyone involved in the tragedy. The series focuses on Clay Jensen (Dylan Minnette), who was in love with Hannah, and his experience listening to the tapes.

The creators of “13 Reasons Why” aimed to show teenagers and young adults that they are not alone in whatever they may be going through. “I saw the opportunity to explore issues of cyberbullying, sexual assault, depression and what it means to live in a country where women are devalued,” writer Nic Sheff stated in an open letter for Vanity Fair. “And, beyond all that, I recognized the potential for the show to bravely and unflinchingly explore the realities of suicide for teens and young adults.”

While the creators of the show may have had good intentions, there is debate over the outcome of “13 Reasons Why” and the impact it could have on impressionable audiences.

Several Fordham students expressed that they found certain plot points of “13 Reasons Why” very problematic. “My whole issue with the show is that it blames Hannah’s mental health issues on other people in her life and all these kids she went to school with. It doesn’t talk about her actual struggle with mental illness and depression. It just blames it on people and I think that’s a very unhealthy idea of suicide,” Isabel Mallon, Fordham College at Lincoln Center (FCLC) ’18, said.

“Clay is presented as a character who could have potentially acted as a savior to Hannah through his love of her and there’s a few issues with that. Mental illness cannot be cured just through somebody accepting you and somebody loving you. It’s much more complicated than that,” Tori Hey, FCLC ’19, said.  “In addition, it plays into this culture that we’ve created in which men must take care of women and women must be dependent on men for their happiness.”

One of the most controversial moments of “13 Reasons Why” occurs in Episode 13 when Hannah’s suicide is shown graphically. This scene goes against the guidelines on reporting suicide created by the American Foundation for Suicide Prevention (AFSP). The AFSP’s website clearly states, “Risk of additional suicides increases when the story explicitly describes the suicide method, uses dramatic/graphic headlines or images, and repeated/extensive coverage sensationalizes or glamorizes a death.”

Fordham staff expressed some concerns about the potential dangers of “13 Reasons Why” in reference to this particular scene. “I agree with and support the guidelines set forth by the American Foundation for Suicide Prevention. For people who are already experiencing suicidal thoughts, being exposed to detailed and explicit depictions of suicide can lower their thresholds for acting out on those thoughts. These kinds of depictions can increase suicide risk for those who are already at risk and vulnerable,” Dr. Jeffrey Ng, director of Counseling and Psychological Services at FCLC, said.

“The research shows that teenagers—the viewers whom the series is aimed at—are inspired to commit suicide by knowledge of other suicides, real or fictional,” Dr. Elizabeth Stone, professor of English at FCLC, commented. “To me, as someone who has long written journalistically about mental health issues as well as about the arts, the series is troubling for a number of reasons. The most compelling is that it shows the suicide graphically, but it almost seems like an advertisement for suicide.”

Dr. Stone continued that it was not only the depiction of Hannah’s suicide that was problematic, but also the ways in which the events that occurred after her death were scripted. She explained that “Moments after Hannah’s death, she gets her parents’ undivided attention, plus her post-mortem plan assures that she will get everyone else’s attention as well and become a celebrity. In such a plot, attention is diverted from Hannah’s own depression, framing her suicide as an act of revenge for which others are responsible.”

Despite these issues, some students and alumni have had positive experiences with “13 Reasons Why.”  “I’ve heard that people think it glamorizes or romanticizes her suicide or that the tapes were ‘revenge,’ but I think that the focus was supposed to be on the repercussions of other’s actions rather than trying to say suicide is a viable option, which it’s never, or Hannah was wrong for making the tapes,” Mariano Bulfamante, FCLC ’19, said “I hope that it will really open people to the idea that their words and actions towards someone really do make a difference in someone’s life and hopefully can go towards the positive.”

“I found the book very relatable because I went through about 70 percent of what happened to Hannah. I think she is portrayed in a way that she could be anyone. Because everything that happens to her is so small, I thought that it showed that it’s applicable to everyone,” Olivia Miranda, FCLC ’18, stated. “I can see how Hannah’s death is the perfect revenge, but I think the point of it is actually the opposite. Hannah never actually gets justice. Her death, yes it makes these people upset, but nothing is done about it. It shows that she never actually got true retribution from killing herself. Life goes on without her and that’s what we see. Suicide doesn’t lead to self justice, and it’s not justice that Hannah can see.”

“I liked that Hannah wasn’t a ‘perfect victim.’ The show challenges our level of empathy. Does a person have to be a perfect person in order to be worthy of empathy? After all, terrible things were done to her, and it did lead to her committing suicide. Overall, this show made me look at myself before pointing the finger at the characters, because even though I may not have ever done what they did, I understand the emotions that led them to it because I have felt those things.” Fordham alum Robert Moore, FCLC ’15, said.

“This doesn’t go for all of the characters, but most,” Moore continued. “We know when things have been done to us, but we don’t think about the things we do to others as often. Also, it’s a fine line of holding people accountable for their actions, but forgiving them for the things they could not have possibly known or had no control over. Having bad things done to you is not an excuse for the bad things you do to others. I learned a lot of valuable lessons from the show, but I think what you get from it depends on who you are.”

Regardless of the arguments it has stirred, “13 Reasons Why” has opened up a conversation about mental illness and how to address it in an appropriate way. “Mental illness is still highly stigmatized in our society, but at the same time, there is a move in the wrong direction by some younger people in our country, teenagers specifically, about almost romanticizing mental illness like ‘13 Reasons Why’ does. Mental illness almost becomes something that younger people are striving for because it’s ‘in’ and it’s ‘cool’ and it’s ‘different.’ I think it needs to be less stigmatized by society yet still be recognized as something that is not a positive experience,” Hey said.

Dr. Ng hopes that Hannah’s cautionary tale will not discourage students from seeking help on campus. “There are so many on and off campus resources for students who are experiencing emotional or mental health concerns. Students have each other, family, faculty, student life staff, public safety, RAs and RDs, campus ministry and, of course, CPS. There’s also a National Suicide Prevention Hotline that’s available 24/7,” Dr. Ng said.“We recognize, however, that there’s sometimes still shame and stigma with acknowledging our struggles and vulnerability, particularly around suicide, and that’s something that I think is important for all of us to continue to address.”

“13 Reasons Why,” starring Fordham Theatre alums Michele Ang, FCLC ’16, and Tommy Dorfman, FCLC ’15, is available to stream on Netflix. For those who have seen the show and would like help discussing it, Dr. Ng has provided a list of “13 Reasons Why Talking Points” to help students interpret the show in a safe and beneficial way. The talking points can be found online at The Observer’s website.