Faculty and Admin Come to Agreement Over Salary and Benefits 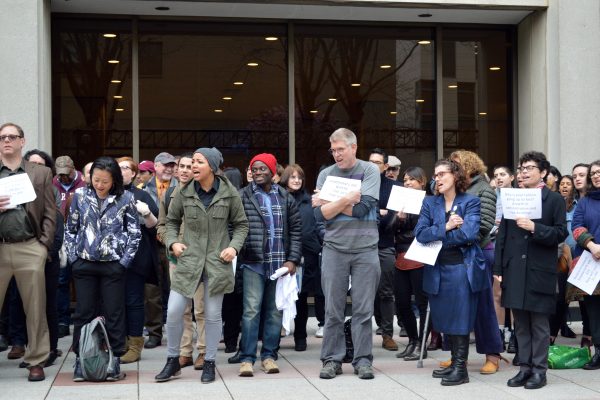 Various members of the Fordham community gathered on the Fordham Lincoln Center plaza for a Sick-In protest on April 19. (ELIZABETH LANDRY/The Observer)

After months of controversy and protests, the faculty have come to an agreement with the administration over salary and health care.

The negotiating team of faculty met with the administration starting at 9 a.m. today and came to an agreement at 5:40 p.m. Today was the deadline for coming to an agreement on the situation.

While the Committee has come to an agreement with the administration, the plan must still be approved by the Salary and Benefits Committee and the Faculty Senate on Monday.

“The deal obviously required various concessions but we believe we significantly protected the level of health care from the drastic cuts proposed by the administration and minimized the cost to faculty and staff,” Andrew H. Clark, chair of the Faculty Senate Salary and Benefits Committee, said in an email statement to faculty.
“Without the bold actions of the faculty and all others who supported our cause, we would never have arrived at the deal we made today.”
The agreed upon deal is for three years and includes salary raises in addition to HRA funds and a hardship fund for those in need for medical costs as well as an arbitration process if any aspect of the signed deal is violated, according to Clark.

“Thanks for your solidarity throughout this process,” Clark continues. “Without the bold actions of the faculty and all others who supported our cause, we would never have arrived at the deal we made today.”

We have reached out to the administration for comment.

Prior to this agreement, the Board of Trustees and Clark issued statements regarding the situation, making different claims as to how closely tied the tuition and fees that serve as the main source of revenue for the university are to faculty salary and benefits.

On April 19, the faculty passed a vote of no confidence in University President Rev. Joseph M. McShane, S.J., in conjunction with a “sick-in” protest. That day’s events were preceded by another round of statements from both sides which further deepened the divide between involved parties.

The first major public event to take place this semester regarding the situation was on Feb. 2, when the faculty held a silent protest outside of the Continuous University Strategic Planning (CUSP) meeting in the Fordham Law School.

The situation began in September when the Faculty Senate filed grievances after the administration violated university statutes in salary negotiations.

This article will be updated as more information becomes available ahead of Monday’s vote.