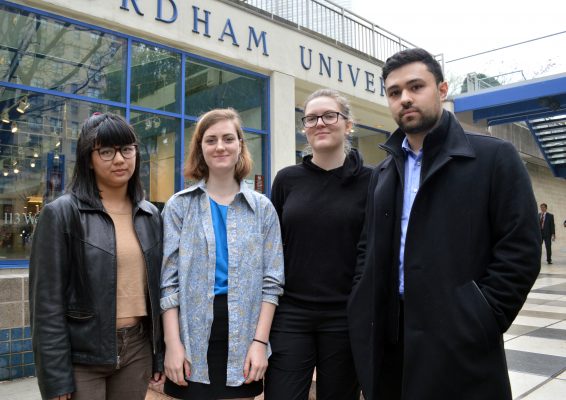 Students (from left) Sofia Dadap, FCLC '18, Julie Norris, FCLC '19, Sapphira Lurie, FCLC '17, and Ahmad Awad, FCLC '17 have filed a case against the university in an ongoing effort to have their club recognized.

With representation by the Center for Constitutional Rights (CCR), Palestine Legal and cooperating counsel civil rights and constitutional lawyer Alan Levine, four Fordham students have sued the university on April 26 over the rejection of Students for Justice in Palestine (SJP) as an official club.

Ahmad Awad, Fordham College at Lincoln Center (FCLC) ’17, Sofia Dadap, FCLC ’18, Sapphira Lurie, FCLC ’17 and Julie Norris, FCLC ’19 have filed the case as a special proceeding under Article 78 of the New York Civil Practice Law and Rules. “Students are seeking a judgment compelling Fordham to officially recognize SJP and provide it the same rights enjoyed by all other clubs at Fordham,” the CCR webpage reads.

SJP was denied club status in December 2016 after a year-long application process that included gaining the support of United Student Government (USG), usually the last step before official approval. After consulting with other school officials, faculty and students, including Jewish Student Organization (JSO), Dean of Students Keith Eldredge determined that SJP would not be granted club status.
The decision “was based on the fact that the chapters of this organization have engaged in behavior on other college campuses that would violate this university’s student code of conduct.”
“I cannot support an organization whose sole purpose is advocating political goals of a specific group, and against a specific country, when these goals clearly conflict with and run contrary to the mission and values of the University,” Eldredge said in a Dec. 22 email to the intended SJP members and their faculty advisor, English department Chair Glenn Hendler, Ph. D. He also said that he thought the club’s presence would be “polarizing” for the student body, and that the group’s support of Boycott, Divestment and Sanctions (BDS) would “present a barrier to open dialogue.”

Despite Fordham students’ having provided a requested letter of non-affiliation from National Students for Justice in Palestine (NSJP) during the club application process, in a Jan. 20 letter to Palestine Legal and CCR, Senior Vice President for Student Affairs Jeffrey L. Gray wrote that the decision “was based on the fact that chapters of this organization have engaged in behavior on other college campuses that would violate this University’s student code of conduct.” He cited disruption of public speaking events, a tactic of SJP chapters described in a 2015 report by the Anti-Defamation League.

In the next months, CCR and Palestine Legal issued letters challenging the school and counseled the intended SJP members as student rights and civil rights groups like the Foundation for Individual Rights in Education (FIRE), the National Coalition Against Censorship (NCAC) and Jewish Voice for Peace took an interest in the controversy. Over 100 Fordham faculty members signed a petition in support of the group and a supporting letter to University President Rev. Joseph M. McShane, S.J. was sent from a range of Catholic educational leaders. Both this letter and the statements by faculty pointed to Fordham’s Jesuit values as reason for allowing students to organize in support of Palestine.
According to the CCR case webpage, the university’s actions are a part of a pattern of “Coordinated nationwide attacks on student organizing.”
A Jan. 23 protest in support of SJP, which Eldredge asserted was unsanctioned, led to disciplinary charges for plaintiff Lurie in violation of the Student Code of Conduct. Eldredge specified Lurie would not be allowed to have representation or any other third individual accompany her inside her closed-door hearing, with a white noise machine running. Lurie left in protest, after which she was sanctioned with an official warning. A March 1 appeal by Palestine Legal and CCR to Gray was categorically rejected.

The April 26 suit could lead to the judgment that the club is to be established, or a dismissal of the case.

According to the CCR case webpage, the university’s actions are part of a pattern of “coordinated nationwide attacks on student organizing.”

“Even if the expression of views seeking justice in Palestine or demanding respect for human rights through BDS is considered polarizing or offensive to some, it is protected speech,” argues CCR Deputy Legal Director Maria LaHood in the April 26 press release. “It is the ideas that challenge us and foster debate that need to be protected most.”

The press release also made reference to 650 incidents CCR says targeted speech supportive of Palestinian rights from 2014 to 2016.

This article will be updated as more information becomes available.