Faculty Senate: “No Confidence in McShane” 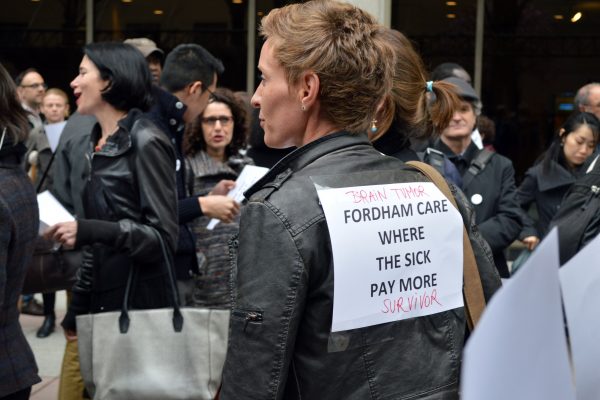 As announced a few moments after 5 p.m. today on the Fordham Lincoln Center (FLC) plaza, a vote of no confidence on University President Joseph M. McShane, S.J. has shown that a majority of faculty members do not believe in McShane’s leadership. The rally that preceded the announcement drew over one hundred attendees and elicited immediate statements from both the Board of Trustees and McShane himself.

Through a third-party vendor, electronic voting was open to 611 faculty members between 8 a.m. and 5 p.m. today. Out of 488 respondents, 431 voted for “no confidence.”

The vote followed a series of statements issued over the weekend on the ongoing salary and benefits negotiations between the administration and the faculty. The issue first gained steam in September, when the Faculty Senate stated that the administration had violated university statutes in the negotiations. Since then, the faculty have staged demonstrations, such as a silent protest during a Board of Trustees and Continuous University Strategic Planning (CUSP) meeting on Feb. 2. Additionally, adjunct faculty protested during Spring Preview on April 8 in an unrelated issue regarding unionization.

At 5:11 p.m., the Board of Trustees and McShane sent out to the community their responses to the vote of no confidence.

In a short statement, McShane expressed his disappointment in the vote’s outcome. “In the twenty years that I have been honored to serve Fordham, I have always tried to be a strong advocate for and supporter of our faculty,” he wrote. “The outcome of the vote, however, in no way diminishes the high regard that I have for them, or the pride I have in all that they have achieved in their research. Nor does it lessen the gratitude that I have for the care they lavish on our students and the life-changing education that they give them, and the deep devotion that they have to the mission of the University.”

The Board of Trustees’ resolution of support in McShane was much longer, detailing their “recently completed…periodic review of” McShane and the fiscal successes they say he has achieved. It also expressed the Board’s disappointment in the Faculty Senate holding a vote of no confidence, and said that the Board “hereby affirms its full support of and confidence in the President and the Administration of Fordham University.”

“The Board recognizes the unique role of the Faculty at the University and therefore has continued to honor and exceed its commitment to keep faculty salaries in the top 20th percentile of Category I (Doctoral Institutions) in the American Association of University Professors Salary Survey, and has, in addition, since 2003, approved a salary increase for Faculty and Staff every year that has equaled or exceeded growth in the CPI both locally and nationally,” the statement read. “The Board understands the importance of the University’s healthcare plan to Faculty and Staff, along with their families, but directed the Administration to revise the current plan in a manner that deals with spiraling healthcare costs for the University at the same time it provides appropriate protection for our Faculty and Staff.”

At the rally, faculty and students were emboldened to speak frankly against the university and McShane in particular. Attendees were asked to hold one of the many fliers available, most featuring an anti-administration slogan like “McShame” or statistics on the differences between the cost of certain elements of health care before and after the change of health insurance plans that the Board of Trustees is considering imposing. They were also invited to decorate t-shirts in support of the rally.

A wooden coffin, featuring “Fordham Cares,” painted on the side, held medical equipment like cloth bandages and crutches that faculty passed out in keeping with the rally theme of a “Sick-In,” to protest the possible rise in costs.

Before the rally began, professors and students chatted while Public Safety staff took up positions at the front plaza stairs and the doors into Lowenstein Hall. The crowd grew, and some, like rally leader Professor Andrew H. Clark, Chair of Faculty Salary and Benefits, and Assistant Professor of Anthropology Daisy Deomampo, brought their children along.

“[Insurance is] an issue that obviously affects my family,” Deomampo said. “I have young children so it’s a concern.”

Some talked about the strong statement the rally was making. “I’ve been here for over thirty years, and this is the worst it’s ever been between the faculty and the administration, this impasse,” Professor of English and African and African American Studies Fawzia Mustafa said.

Speeches were punctuated by chants, most often “How are you feeling?/Sick!” Several faculty members spoke, including Associate Chair of Communications and Media Studies Gwenyth Jackaway, who read the open letter she sent to McShane and the community on April 13. Assistant Professor of English Shonni Enelow also spoke to the crowd about the tripling cost of her current pregnancy under the new plan.

A labor union representative spoke, as well as a leader of FFU, Alan Trevithick. Associate Professor of Sociology and American Studies Program Director Micki McGee described the response from the administration to the Faculty Senate’s requests for negotiation as “F- you.”

“Our contingent faculty, our staff, our full-time faculty, our students, all of our trajectories and lives are affected by the meeting that’s going on up at Rose Hill right now and tomorrow,” McGee said. “So with that in mind, I want you to know — they can hear you, up in the Bronx where they’re meeting.”

Clark said that in the case that the Board of Trustees decides against allowing the Faculty Senate negotiation, they “will sue the university.” He later clarified that they have not decided on legal steps yet since it depends on the Board’s decision Thursday.

He also recalled a message he received from an unidentified low-level administrator recently, in which the individual said that their healthcare, the main reason they work at Fordham, would increase in cost by 345%. “Faculty are hurt significantly, but it’s the low wage administrators, the middle wage administrators and the contingent faculty who will be destroyed by these changes,” Clark said. “So we have to fight for everyone in this.”

He called the administration’s reasoning in their April 13 statement, which pitted tuition and financial aid against faculty salaries and health care negotiations, a “horrible argument,” and “a fallacy.”

The heads of Faculty Senate grouped together to see the result of the vote before Clark announced it over the megaphone.

His voice raw as he spoke after the rally, Clark emphasized that it was an emotional moment and that after being very low on sleep, his next steps would be to turn his attention back to the classes and students for which he is also responsible.

Clark clarified that the vote must be understood as a symbolic “critique” of McShane’s leadership in his role as University President, but could point to further action. “The Board has a responsibility to the institution,” he elaborated. “This vote will have certain ramifications in respect to the Board.”

Correction: A previous version of this article implied that the contingent of faculty in favor of the “no confidence” vote was less than the majority.