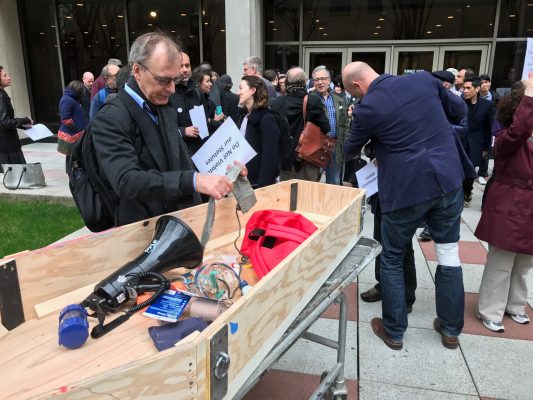 The results of the "no-confidence" vote will be revealed at the end of the rally at 5 pm. (ELIZABETH LANDRY/THE OBSERVER)

On Wednesday, April 19, members of Faculty Senate are staging a “sick-in” rally at Fordham College at Lincoln Center (FCLC) and participating in an unprecedented electronic vote of no confidence in University President Joseph M. McShane, S.J., after an ongoing battle which sees faculty wage negotiations and healthcare contracts hanging in the balance.

Set to begin at 4 p.m., the rally was created with the added support of unofficial group Fordham Students United “over [McShane’s] mishandling of salary and benefit negotiations, the university’s breaking of the legally binding statutes that define co-governance by the administration and faculty, and the university’s blocking of the contingent faculty’s democratic right to unionize,” according to the press release.

The vote of no confidence was proposed during the April 7 Faculty Senate meeting, in response to the administration’s push to eliminate two of the three available health care plans currently available after a 2016 imposition of salary and benefit changes as well as salary allocation without the statute-guaranteed negotiations with the Faculty Salary and Benefits Committee and the Faculty Senate. The Faculty Senate asserts that the one plan left “would shift thousands of dollars of costs onto the sickest, most vulnerable members of the faculty by offering a plan with high co-pays, a high deductible and extremely high out of pocket maximums.” They also say the university will not discuss wage renegotiations unless the faculty accepts the one health plan.

According to Professor Andrew H. Clark, Chair of Faculty Salary and Benefits, in September 2017 it was announced that “any salary deal with be part of a total compensation deal” which would have to be completed by the Board of Trustees’ April meeting, which takes place Wednesday, April 19, and Thursday, April 20 on the Fordham Lincoln Center (FLC) and Fordham Rose Hill (FRH) campuses respectively.

Conducted through a third-party vendor, the vote will be taken electronically between 8 a.m. and 5 p.m. and the results will be publicly announced on the plaza at the end of the rally.

Bob Howe, Assistant Vice President for Communications and Special Advisor to the President, has issued several statements regarding this action, the first calling the vote of no confidence “mystifying.”

“The Board of Trustees and members of the administration have been working with faculty representatives to finalize the budget for the fiscal year and negotiate equitable, competitive and improved solutions for benefits and salaries,” he said on 13 April.

That statement gave the University’s purported principles for negotiations: that the university would “strive to make our proceedings as inclusive and transparent as possible,” “maintain good relations with its unions and unionized employees and continue to support the right of employees to organize and join unions,” and “continue to treat our colleagues with care and resist the temptation to personalize issues of a professional nature.”

In an April 14 email to the Faculty Senate, Clark wrote that although he thought the 2014 contract with the administration could be reasonably and legally implemented until 2019 “at the very earliest,” “there would be advantages to avoiding legal action if possible and resolving the negotiation while respecting the Statutes even if it means some increased costs for all faculty.”

“Without the rule of law and the shared governance on which it relies, the faculty will continually be subject to the unilateral actions of the administration,” Clark wrote later in the email, referencing the violation of the statutes as a violation of over 30 years of historical precedent. “That sense of insecurity, alienation and instability is something many faculty have felt more and more acutely and it has led to a significant decrease in morale.”

Associate Chair of Communications and Media Studies Gwenyth Jackaway, in a letter to McShane and the Board of Trustees on April 13 which gained high traction on social media, said that her pride in her thirty years of academia spent at Fordham was challenged by the school’s choices which, to her, went against their dedication to Jesuit values. “I’m being told that this new plan won’t cover the care I’ll need to heal the various stress related health issues I’ve accumulated… overseeing our rapidly expanding program while simultaneously redesigning it,” she wrote. “Now in my mid fifties, as a parent to a special needs teen, I find myself suddenly worried about our healthcare… I keep hoping that someone wise, someone with true vision who remembers what it means to be a Jesuit will step in and stop what’s happening on our campus.”

Clark also wrote in the April 14 email that the Faculty Senate acknowledged that the vote is symbolic. “Votes of no confidence have historically had power and have frequently resulted in the eventual resignation of university presidents,” Clark wrote. “Such votes are statements on the part of a community that they have lost confidence in the leadership functions being performed.” He outlined the eight-year struggle between the Faculty Senate and the administration ranging from threats of health care impositions and the salary imposition with its allocation, to frozen academic budgets and increased workloads with fewer staff, and “a Board of Trustees that appears to believe we only work 9 months a year.”

With a Fordham Faculty United protest yesterday at FRH’s Cunniffe House on behalf of the adjunct and contingent faculty wishing to unionize, the administration is under a great deal of pressure from the faculty. However, it will be up to the Board of Trustees in their meetings today and tomorrow to make the final decisions on the faculty salary and health insurance packages.

Update: April 19, 2017 at 4:20 p.m.
Clark has said to the crowd gathered outside in the plaza that in the case of the Board ruling against them, they “will sue the University.”