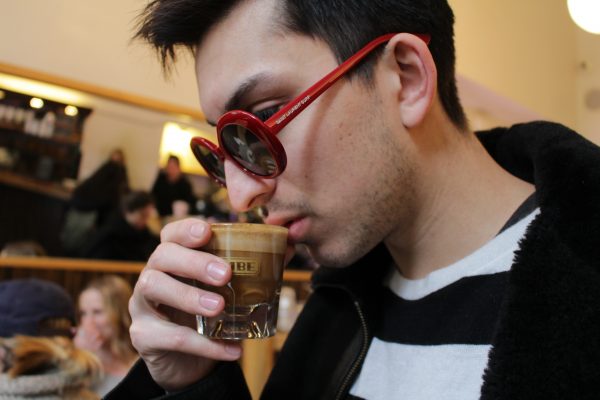 The average college student will be seen with certain essentials. These necessities consist of a pocketbook or backpack, textbooks and of course, a bottle of water. But, there’s one fundamental object which is more easily observable among students with 8:30 a.m. and 6 p.m. classes. Students with block courses also will often be seen carrying this essential, in addition to the professors teaching these classes. This common essential is a caffeinated drink, whether it’s a cup of coffee or tea. These different drinks contain relatively varied doses of caffeine. One is then urged to ask the following two questions: how much caffeine should one limit his daily intake to? Also, can caffeinated beverages help college students academically?

Caffeine is one of the drugs that is most widely naturally found or artificially added in present-day consumed foods. Because the drug is added to so many soft drinks, and other caffeinated drinks, some may find it mildly addictive. It is for this reason that coffee drinkers, specifically, experience withdrawal side effects when they stop their daily habit of drinking coffee. Some of these symptoms include headaches, fatigue and lethargy to name a few.

The avid caffeine enthusiast may drink multiple cups of coffee or tea each day. When asked, Muhammad Burney, Gabelli School of Business at Lincoln Center (GSBLC) ’19, attested to this. “Having an affinity for caffeinated beverages, if I normally don’t have Starbucks, I’ll resort to some sort of tea,” Burney said.

Each person has a particular reason for daily intake of drinks containing caffeine. “For the most part, I enjoy drinking iced coffee and iced tea for the flavor,” Burney said. Thania Hussain, Fordham College at Lincoln Center (FCLC) ’19, however had a different reason for her daily consumption. “I often drink two cups of coffee on weekdays because it makes me feel energized and focused when I have to be productive,” Hussain said.

It’s helpful to know specifically how much caffeine each of these drinks contain. According to statistics compiled in the Journal of Food Sciences, Journal of Analytical Toxicology and the United States Department of Agriculture (USDA) Nutrient Database for Standard Reference, there are different concentrations of caffeine used in each drink.

The amount of caffeine used in these drinks may seem generous. It’s important to note that the American Academy of Pediatrics recommends that adolescents consume no more than 100 mg of caffeine per day.

One study conducted in 2016 and published in the Frontiers in Psychology journal hints at a plausible connection between caffeine consumption and enhanced academic performance. The study was led and authored by Stephanie Sherman, Ph.D, post-doctoral fellow in the psychology department at Boston College. The findings included observing that after consuming coffee, be it caffeinated or decaffeinated, college-age students were able to “[complete] implicit and explicit memory tasks in the early morning and late afternoon. During the morning, participants ingesting caffeine demonstrated a striking improvement in explicit memory, but not implicit memory.” The publication further reports that caffeine has a specific benefit on student memory during non-optimal times of the day, such as in the morning.

The validity of this study is something that will certainly require further research. For the time being, however, this may encourage more students to consume caffeinated drinks for those 8:30 a.m. and 6 p.m. classes.