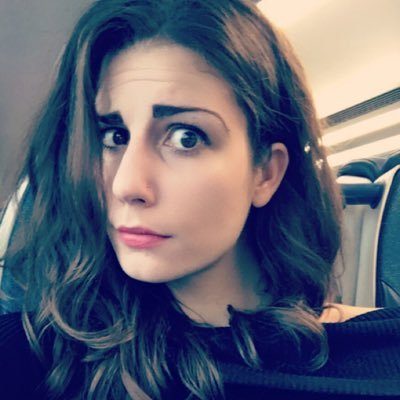 Witty and sarcastic in her opinionated tweets, Lauren Duca demands to be heard as a journalist and stresses that journalism is meant to empower the public with truthful information.

She is a twenty-six year old Fordham College at Rose Hill (FCRH) graduate who has written for publications including The Huffington Post and The New Yorker, and is now an L.A. Press Club award-winning freelance journalist. She visited Rose Hill on March 6 to discuss journalism and its current role in politics. Before the lecture, presented by Fordham’s Communications Honor Society, Lambda Pi Eta, Duca said that she wanted to inspire young writers and motivate millennials not to take their power in politics for granted.

She came into her freshman year at Fordham simply wanting to write, and found her voice as Editor-in-Chief at the paper (Fordham’s alternative newspaper). She recently found herself in the middle of controversy and attention when her December 2016 Teen Vogue op-ed article “Donald Trump is Gaslighting America” went viral. In the article she accuses the Trump administration of “gaslighting,” a psychological method that causes people to question their own sanity.

The powerful claims in her article caught attention from CNN, The Washington Post and other media outlets, and Duca’s outspokenness gave her the opportunity to speak with Tucker Carlson on Fox News. After this appearance in which she was repeatedly cut off and demeaned for writing about celebrities for Teen Vogue, and called Carlson a “partisan hack,” Duca tweeted “@TuckerCarlson is an enemy of rational discourse. In this fraught moment, his bully tactics are profoundly damaging, and achieve nothing.”

Both of these things made Duca the subject of online harassment, which she writes about in her essay in the mental health section of TeenVogue.com entitled “To Trolls, With Love.” It details death threats, rape threats, explicit sexism and the ways this treatment has affected her.

In her speech Duca discussed threats to truth and willful spread of disinformation by powerful entities. She referenced the Trump administration taking part in the distortion of truth. She suggested that there is a need for more funding for original reporting “because of what’s going on,” referring to limitations on the press imposed by the Trump administration. She also stated that one big problem is that Trump’s tweets are often just written up as a story without fact checking for his claims. With this she emphasized that journalism is a necessary check on power, and that if journalism does not stem from a foundation of fact, it is nothing.

“Journalism is never perfect, but it is super imperfect online,” Duca said. Citing a lack of media literacy she expressed the danger in how frequently and quickly distorted or plainly false stories spread online. She stated that today, among the the most important jobs of a journalist is to empower the public with facts.

Despite its unreliability, Duca said the internet is generally a good thing for media, citing that it has created more democracy of voice and of information. Primarily referring to Twitter, she explained that social media can be used as an outlet for citizen journalism, giving everyone access to raw material and primary sources. Instead of reading about something that happened, there are actual videos available where we can almost witness the events.

This democracy of voice is also a powerful force and a crucial tool especially in movements involving marginalized people, Duca asserted, using the Dakota Access Pipeline as an example of a story that would not have taken off without Twitter.

Duca also had advice to offer for practicing media literacy and staying rigorously informed. When reading a report, she advised, “Ask yourself, ‘How are they telling me they know this?’” From this you can find the sources and look to original reporting to get the “nuts and bolts” before reading a story that may shape your view. She also suggested thinking critically about the journalist’s position and possible motives. “Why did they choose to write it this way?”

“As a non-journalism student I found the lecture incredibly valuable. I think we need to have discussions about the media and its value especially today when it is under attack,” said Braylee LeClair, a Gabelli business student (FCLC ‘19).

Finally, Duca, a millennial herself, addressed problems that millennials face in participating in political conversations. Sharing an anecdote about being overlooked as only “a voice for millennials,” she described the way millennials are often belittled in politics. She passionately encouraged the millennials in the room. “The only thing you need to express an opinion is to be informed,” she insisted. “Don’t let people shut you down because of your youth.”