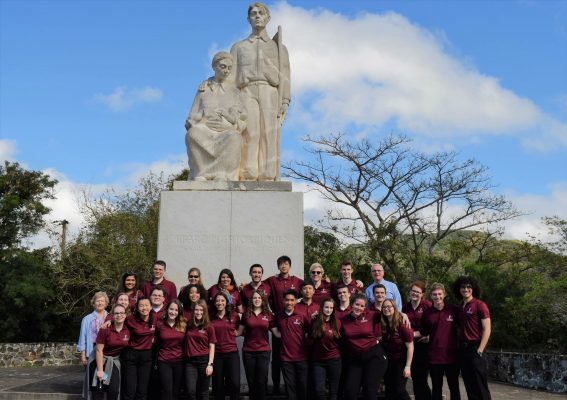 During Fordham’s recent Spring recess, the University Choir traveled to Puerto Rico to share music, culture and life lessons with local citizens and students. This marked another exciting activity for the choir who, during the current school year, has performed at Saint Patrick’s Cathedral for Fordham’s Dodransbicentennial Mass celebrated by Cardinal Timothy Dolan in October, added a third performance to Fordham’s Annual Festival of Lessons and Carols in December and most recently, performed at the world’s most famous concert hall, Carnegie Hall. To say the University Choir is having a “banner year” would be an understatement, and the group’s seven days in Puerto Rico were no exception.

The trip was a part of an ongoing University Choir tradition, to share a combination of music and service to communities not only across the country, but around the world. In recent years, the choir has traveled to Ireland, the United Kingdom and California. The choir, led by longtime director Robert Minotti, has groups at both Fordham College at Lincoln Center (FCLC), also known as the Lincoln Center Chamber Singers, and the Bronx’s Fordham College at Rose Hill (FCRH). While these groups typically rehearse separately, they perform together multiple times during the academic year. The annual Choir Tour allows FCLC and FCRH students to get to know each other and form long-lasting friendships.

Though Puerto Rico is a territory of the United States, it offers visitors a unique Caribbean experience they would not find in the mainland U.S. I, along with the rest of the choir, immediately felt immersed in the rhythm of the island—from the delicious food to the happy and welcoming locals. “I learned about a new place and culture,” Lydia Culp, FCLC ’19, said about the tour. She continued, “Even better, while I didn’t know the language, I was able to bond with students over a mutual love for music, which transcends the barriers of language and culture.” These “students” were not only our fellow Rams from the Rose Hill campus, but also our fellow choir members whom we met throughout our week in Puerto Rico. The University Choir met and performed with accomplished Puerto Rican choirs from Pontifical Catholic University in Ponce, Colegio San Ignacio de Loyola in San Juan and the University of Puerto Rico at Cayey.

The trip was not only an introduction to “La Isla del Encanto” for many students, but also a homecoming for Rose Hill sophomore, Victor Rodriguez. “The most rewarding thing was seeing how my fellow Fordham students were genuinely impacted by it all,” Rodriguez, FCRH ’19, a native of San Juan and proud graduate of Colegio San Ignacio de Loyola, an all-male Jesuit high school located in San Juan, said. “I can’t put into words the emotions I felt standing with fellow Puerto Ricans and sharing our songs and stories with a group of my kind and open-minded Fordham peers,” he continued. “It’s the kind of feeling I want to share with the world.”

Aside from Minotti, the choir was joined by Joan Cavanagh, director of campus ministry at Fordham’s Westchester campus, and longtime accompanist Kenneth Farnum, a proud Fordham alum. With Rodriguez’s guidance and passion for sharing his island’s culture, both Fordham students and staff received  an experience they will not soon forget. Maya Banitt, FCLC ’19, would agree, sharing with me, “[This] was an experience I am eternally grateful for. Not only did I bond more closely with members of the choir, but I also made many new friends among the students we got to sing for in Puerto Rico.” Whether we were showing off our new salsa dancing skills, trying new foods and pastries, or even yours truly teaching our Puerto Rican brothers and sisters how to properly dance to the “YMCA,” the members of the University Choir made the most of every day during this enriching experience.

Perhaps the most amazing part of the trip was how kind and welcoming the citizens of Puerto Rico were to the University Choir. Through our interactions with students and senior citizens alike, we were reminded throughout the week that as New Yorkers and as Fordham students, we have a great deal to be thankful for. Though Puerto Ricans are considered natural-born U.S. citizens, the unfair taxation of citizens without representation in the United States Congress (Puerto Rico is granted one non-voting member in the House of Representatives) or Electoral College has historically put Puerto Ricans at a disadvantage. Under a new administration in Washington, public universities and other programs afforded to U.S. citizens have found themselves on the chopping block. As the week progressed, Fordham students were encouraged to remember the struggles of our fellow Americans—the citizens of Puerto Rico—and work towards helping sustain and maintain programs so near and dear to their heart.

“I feel like these experiences are extremely necessary given Puerto Rico’s current political and economic status,” Rodriguez said of the tour. “I want everyone to internalize that as fellow U.S. Citizens, all the beauty and pain that they saw is their privilege, responsibility and burden too.”