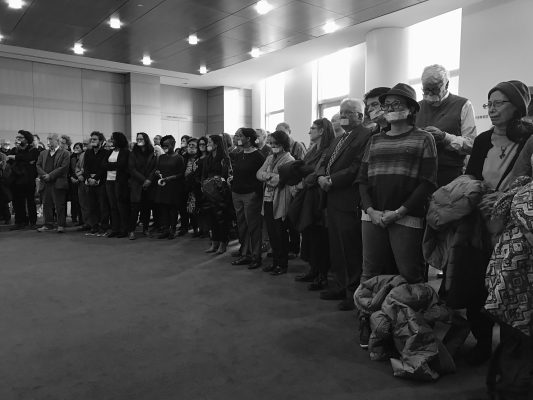 Faculty Senate has been protesting the administration's decision to determine faculty pay increase without negotiation. (PHOTO BY SOPHIE KOZUB/THE OBSERVER)

Following an ongoing dispute with the administration over salaries and benefits, the Faculty Senate met on March 23 to discuss the conflict.

The meeting occurred after an email from the university was sent out to the Fordham community, in order to clarify and make corrections to a flyer released by the Faculty Senate. Andrew Clark, Ph.D., chair of the Faculty Salary and Benefits Committee, described the email as a continuation of the “series of different tactics” the administration has been using to “impose new rules on the faculty without their consent.”

Martha Hearst, the university’s senior vice president, said in a “clarifications” email that the negotiating team felt “compelled” to correct a “number of misleading and wholly incorrect assertions” in the flyer distributed by the Senate.

The proposal will replace the two existing, more expensive health insurance options in favor of a new option called the Fordham Plan, that would be “affordable, effective, and competitive,” according to the email. The clarification goes on to list the new benefits to the plan, including a platinum prescription drug program, a pre-certification waiver, and the establishment of a health  reimbursement account fund of $350,000, a benefit meant to serve as a “safety net” for faculty that are most affected by the transition to the new plan.

While the email states that the healthcare plan “would carry the most generous health insurance benefits Fordham would offer,” faculty members still find issue with many of the provisions in the response. There is still a 10% co-insurance rather than 0% in-network, and a 30% co-insurance out of network, according to data presented at the meeting.

In addition to the co-insurance, the Senate claims that there is also an increased maximum out of pocket for both in and out of network, as well as increased co-pays and increased co-pays on tiered drugs. There are also in-network deductibles and co-insurances that don’t exist in the current Enhanced Plan, and various procedures and treatments that will no longer be covered, according to the info given.

One faculty member commented that they are seeing “both a decrease in salary and an increase in health care plans.” Among other problems listed with the Standard Plan, one professor commented that it is “unclear” who manages and will qualify for it, what procedures it will cover, and how it will dispersed out to faculty.

“There is no transparency reflected in their response,” the faculty member said.

Another faculty member who presented more statistics on the rise of healthcare costs said that “if you never get sick, then this is the insurance plan for you,” referring to how the standard plan adds extra costs that would “significantly affect” faculty and lower-level administration.

The last part of the meeting focused on moving forward. Opinions differed on how to handle the situation, but many members agreed on taking some form of action in order to avoid rising costs.

“If we are going to have the impact we want, then we have to show how the university will be affected,” one member said.

The administration board will be voting on the issues on April 20. Although no solid decisions were made on how to proceed, Clark said the number of members who attended was “amazing” and that it was “fantastic to see such an awesome turnout.”

“The most admirable part of this institution is its care and solidarity of the faculty,” Clark said.