Jeff Sessions is the Latest Symbol of Putin’s Puppetry 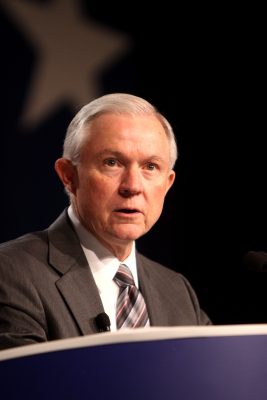 In early March, Attorney General Jeff Sessions became the subject of yet another controversy in the Trump administration. The Department of Justice discovered that Sessions had met with Russian ambassador Sergey Kislyak twice during Session’s tenure as Alabama’s Senator. One of those meetings was conducted last September, a time during which the Russian hacking scandal — and its influence on the U.S. election — was at its peak, according to U.S. intelligence officials. Not only did Sessions orchestrate these meetings, but he also lied about them under oath. During his Attorney General confirmation hearing he stated that he “did not have communications with the Russians.”

He is not the first person associated with President Trump who has owned the spotlight because of ties to Russia (or, at the very least, reasonable evidence to believe such a claim). Trump’s pick for national security adviser, Michael Flynn, made a series of phone calls to ambassador Kislyak. He then lied about them to Vice President Pence, which got him fired, according to the White House. Meanwhile, former Trump campaign manager Paul Manafort allegedly had longstanding ties to the Russian state and received almost $13 million from Ukraine’s pro-Russian former president. And let us not forget the leaked dossier alleging that Russia had compromising information about Trump.

It may seem unimportant that all these members of the Trump team have ties to Russia because of Trump’s seemingly unabashed praise of Russian President Vladimir Putin. This is not the case. The difference between Trump and his henchmen is that Trump is relatively outright about his praise for Putin while his henchmen consistently lie about their Russian ties. Every Trump team member who has met with Kislyak has either denied it or claimed not to recall it – which means that either Kislyak is a particularly boring guy or Trump’s minions are hiding something. And, unfortunately, I’m inclined to suspect the latter.

This narrative of Trump and his administration conspiring with Putin and his officials is one that makes all too much sense. If Russia really does have compromising information about Trump, it would be logical to conclude that Putin wanted Trump in power to use him as a political puppet. Putin knows that Trump wants to protect his name and brand, so Trump will do what Putin says for the sake of that brand. It also makes sense that Trump picked many of his top aides to be affiliated with Russia. In addition to the aforementioned members of his circle with secret Russian bonds, there is also Secretary of State Rex Tillerson, the former CEO of ExxonMobil, who has had business relations with the Russian state and an Order of Friendship from Putin – a high Russian honor.

While investigating Trump and his team’s involvement with Russia, we should not forget the legitimacy of the danger of Russian ties. The Obama administration, which has been called too weak by people like Trump himself, placed economic sanctions on Russia, indicating that Russia is too much of a threat and an enemy for the U.S. to do any trade or financial transactions with it. But Trump himself has business and financial ties to the Russian state. So it makes no sense that Trump would praise Putin and allow the members of his administration to have ties to such a government.

This Trump-Russia tumult is indicative of how seriously Trump takes the job of President. If he is willing to squander such a momentous opportunity so that he might not tarnish his name, he probably does not regard this role with much importance. And since a President must prioritize the safety of American citizens, he might not consider that item as a scary thought.

Am I suggesting that Trump might put the lives of Americans in danger just for the sake of his name? Yes. Should you believe me? Ultimately, that decision is yours, but I do encourage you to maintain a healthy skepticism of this administration. As I once read on a sticker on a telephone pole, “Informed dissent is more patriotic than blind obedience.”