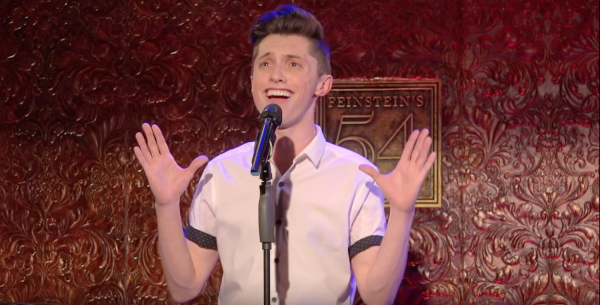 Sophomore Roger Dawley has had the honor of performing in shows at Broadway's legendary 54 Below, the same venue that has held concerts by Orfeh, Telly Leung and Lesli Margherita. (PHOTO COURTESY OF ROGER DAWLEY)

Roger Dawley, Fordham College at Lincoln Center (FCLC) ’19, lives a double life as a college student and performer. Although majoring in Communication and Media Studies, Dawley is also pursuing what he calls a “degree in the hard-knock school of musical theater” through independent performance endeavors in New York City. Most notably, he is a continuing performer at Broadway’s 54 Below, a dining club featuring nightly shows by accomplished singers and Broadway stars.

Dawley got involved with 54 Below in the spring of 2016 after the teachers of his off-campus theater class chose him to be in the ensemble of an upcoming show. Since then, producers of the venue have continued to hire Dawley for a variety of singing gigs, ranging from ensemble work to featured solos. Dawley balances these professional performances with his career as a full-time student, as well as with various dance and theater classes that he attends outside of Fordham.

“It’s a matter of staying focused,” Dawley said of the experience. “The busier I am, the better everything goes. So if I rack up dance classes and voice lessons and this-and-this-and-that, I am more likely to actually do my French homework than I would if I were just sitting in bed all day.”

Many prominent Broadway performers come through 54 Below, where, at only 19 years old, Dawley gets to share the stage with them. “It’s weird to stand in that place and use that microphone and think oh my god, six months ago so-and-so touched this. It’s definitely daunting.”

Dawley performs at other venues in New York City as well. Last May, he had the honor of performing “Mozart’s Requiem” at Carnegie Hall. He has also worked with contemporary theater writer Ryan Scott Oliver on developing new works— a process that can be stressful, especially for a full-time college student. Dawley once worked on a show called Rope, which was put together entirely in just one week of rehearsals. “I think it was like five days, then we were doing it front of real people, so that was terrifying, but great.” The pressures of creating a new work are worth it for Dawley. “The stuff that I enjoy the most is the new material because no one else has touched it before. If you put something unique on that, it’s yours and no one else can really take that away.”

After graduating in 2019, Dawley hopes that his degree in Communications will help him to get a stable job while still pursuing theater. “I know a lot of people who are actors and that’s it. They work at XYZ and are really down and not happy because they are not making enough to sustain a living doing what they love. So I’m taking this weird 50-50 route, where I get to enjoy communications and actually make money to sustain myself. If I were to book something huge, I would quit that communications job in a second and I would take that. So that’s the weird plan, and I’ll see how it goes. It’ll be interesting.”

Majoring in communications has already proved to be useful to Dawley, who runs the social media page for Actor’s Therapy, an intensive theater program he’s attended. Of social media, Daley says “Everything that has to do with theater has to have this PR aspect to it. Running the social media page for Actor’s Therapy is a job that I enjoy because I get to talk about all the stuff I’m interested in. I think it definitely overlaps a lot.”
Dawley is not currently working on any shows, as much of New York City’s show-business is spontaneous and sporadic. However, we can expect to see many great performances from this ‘hard-knock’ musical theater performer in the near future.