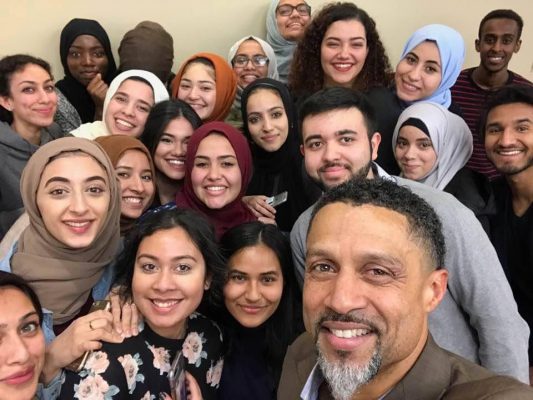 Mahmoud Abdul-Rauf spoke at an event hosted by the MSA. (COURTESY OF MSA/FACEBOOK)

On Mar. 2, 2017, Mahmoud Abdul-Rauf, a former National Basketball Association (NBA) player visited Fordham Lincoln Center. He was in attendance for an event hosted by the Muslim Students Association (MSA), titled, “How Faith Changed My Life.” Abdul-Rauf’s talk centered around the pivotal role Islam played in his career. He is best known for his controversial decision to not stand for the National Anthem in 1996. He cited the flag’s symbolism and its conflict with his Islamic beliefs as a major driving force behind his decision.

Abdul-Rauf began the night detailing the early part of his life. He was born as Christopher Wayne Jackson in 1969, in Gulfport, Mississippi. Growing up in a single-parent household didn’t afford Abdul-Rauf the same opportunities and privileges many others his age may have had. Atop his financial and living struggles as a youngster was his condition of Tourette Syndrome.

Tourette’s is a neurological disorder characterized by repetitive movements, involuntary tics or unwanted sounds. Abdul-Rauf wasn’t diagnosed with this syndrome until he reached his junior year of high school. Having to learn how to cope with the numerous side effects of this condition placed Abdul-Rauf at a disadvantage academically. In fact, he was placed in a special education class for quite some time, which further lowered his self-esteem and confidence. He explained part of his difficulty staying alert in class: “I couldn’t focus on what others would say in class because I was too afraid others would laugh at me.”

Despite the complications which arose from his condition of Tourette’s, Abdul-Rauf rose to prominence as a basketball prodigy at Gulfport High School. He was named Mississippi’s Mr. Basketball in consecutive years, both in 1987 and 1988. His ability to utilize his deficiencies to grow and excel on the court is one of his more remarkable achievements. For Abdul-Rauf, being diagnosed with Tourette’s was a blessing in disguise. Being compelled to repeat activities, especially on the court, made him a perfectionist.

Abdul-Rauf viewed basketball as his only potential career option. It was only until later in his professional career when he realized, “I had a better chance of becoming a doctor or engineer as opposed to a basketball player.”

It was this success on the court which jump-started Abdul-Rauf’s collegiate career at Louisiana State University (LSU). During his two years of college basketball at LSU, he was named the Southeastern Conference (SEC) Player of the Year, and was awarded First Team All-American honors for two years in a row. This success on the court continued with Abdul-Rauf being selected third overall in the 1990 NBA Draft by the Denver Nuggets.

With time, Abdul-Rauf was further exposed to the beliefs of Islam and converted to the faith in 1991. Soon thereafter, he changed his name from Christopher Jackson to Mahmoud Abdul-Rauf. The concept of faith was an important one for him even later on in his career. He stated, “The first book I ever finished was the Qur’an. The first time I left to go outside of the country was for hajj.”

His nine-year NBA career was spent with the Denver Nuggets, Sacramento Kings and Vancouver Grizzlies. He received a plethora of accolades during his time with the Nuggets including, being named to the NBA All-Rookie Second Team during his first season. During the 1993-94 and 1995-96 seasons, he led the NBA in free-throw percentage. Additionally, he was named the Most Improved Player in 1993.

His success in the NBA gained momentum until he made the decision to not stand up during the playing of “The Star-Spangled Banner.” His subsequent suspension from play resulted in a compromise, whereby Abdul-Rauf would stand and pray during the National Anthem. During this time, faith provided him with the inner spiritual support which he previously lacked. As he stated, Islam offered Abdul-Rauf with an explanation to the questions he couldn’t find answers to anywhere else. Abdul-Rauf explained, “It was the process which led me there. When people looked at me as the black guy not standing for the flag, they asked where did this come from. It comes from the experience they’ve had. It doesn’t happen overnight.”

The recurring theme of faith throughout his lecture shed light on another important, yet less emphasized concept today: Abdul-Rauf’s legacy. His decision to not stand up for the National Anthem, in a time when no social media or few outlets for free thought existed, ultimately led to the downfall of his NBA career. His controversial decision, however, did set the path for athletes speaking out on social and racial justice issues. Prior to Abdul-Rauf’s stand, few other athletes came forward to reject the status quo and fight for issue such as race, gender, equality and religion.

Abdul-Rauf’s stance without a doubt jeopardized his NBA career. Nonetheless, his decision to not stand for the National Anthem two decades ago today is regarded as a first. Athletes such as Colin Kaepernick, Lebron James and Carmelo Anthony, among others, have since used their respective platforms to promote dialogue about issues of importance such as Black Lives Matter and equality for all faiths. For Abdul-Rauf, his career is also a coming of age story. As a kid from Gulfport, Miss, many doubted his ability to succeed later on in life. They would say, “You’re too small. You’re not going to make it. Nobody made it out of my town. There’s a tendency to believe, but not want to believe it. That feeling of not being believed in is what keeps driving and fueling you.”