An Oscars That Was Worth the Wait 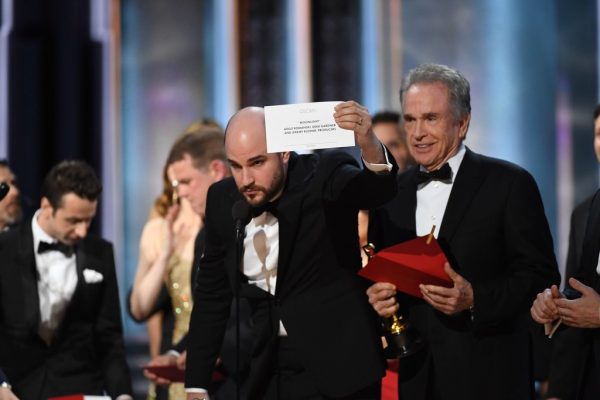 Another great year for cinema has come and gone, and with it came the Oscars—a glamorous night honoring the Academy’s favorite films that excites both actors and cinephiles alike. The polls were in, and many were expecting “La La Land” to sweep the night with their whopping 14 nominations; there was the potential for it to even break the record for the most Oscars ever won by a single picture. The result, however, was anything but. With a shocking Best Picture mishap, political jokes galore and a man named Gary from Chicago, this year’s Oscars were definitely not predictable.

The basis of the night was celebrating not only the actors and actresses in films but also what movies are capable of doing—from immortalizing all types of people on the screen to evoking unexplainable emotion in viewers all over the world. The evening included multiple odes to cinema, with clips of different actors and actresses explaining their love of the movies and flashbacks of previous winners of major award categories. However, the greatest glorification of the cinema came from Viola Davis’s excellently conveyed speech for her Best Supporting Actress win.

“You know, there’s one place that all the people with the greatest potential are gathered. One place and that’s the graveyard. People ask me all the time, what kind of stories do you want to tell, Viola? And I say, exhume those bodies. Exhume those stories,” she spoke.  “The stories of the people who dreamed big and never saw those dreams to fruition. People who fell in love and lost. I became an artist—and thank God I did—because we are the only profession that celebrates what it means to live a life.”

Davis made history as the first black actress to win a Tony, Oscar and Emmy for acting, but she was not the only woman who shined at the Oscars. Emma Stone also won the coveted Best Actress category for her performance in “La La Land,” while Meryl Streep received a standing ovation for her total of 20 Oscar nominations over the years.

Denzel Washington, a Fordham College at Lincoln Center (FCLC) ‘77 alumnus, was also present, nominated for Best Actor for his performance in “Fences.” While he did not win the award (Casey Affleck did for “Manchester by the Sea”), it was still refreshing to see a familiar, Fordham face on the screen.

But, with nine incredible films nominated for Best Picture, it was hands-down the most anticipated moment of the evening. “La La Land,” predicted to get almost every Oscar it was nominated for, had only won six of the 14 total awards. Everyone thought that it had won Best Picture too…until the real winner was announced as “Moonlight.” The mishap occurred when actor Warren Beatty received a duplicate card from the “Best Actress” category, and he and fellow presenter Faye Dunaway interpreted that “La La Land” had won. The entire cast flooded the stage, but, in the middle of the acceptance speeches, it was announced that “Moonlight” was the real winner—it was all one big mistake. Cue the gasps from the audience and viewers alike. Thankfully, the “La La Land” producers were gracious and professional about the mistake, willing to give “Moonlight” the award it so deserved.

And, what is the Oscars without a host? Jimmy Kimmel was on fire. Throughout the evening, he was completely unafraid to deliver some political shots clearly aimed at President Donald Trump, and other stars were taking part as well. Kimmel took to Twitter several times over the night, attempting to reach out to the President to elicit some type of controversial response from him about the ceremony, Mexican actor Gael García Bernal spoke against the famed border wall, and  Asghar Farhadi, the Iranian winner for Best Foreign Film, did not even attend the ceremony as a sign of protest.

“My absence is out of respect for the people of my country and those of other six nations who have been disrespected by the inhumane law that bans entry of immigrants to the U.S.” he wrote in a statement read at the ceremony.

But, while the performance was politically charged, Kimmel was professional enough to keep the atmosphere light and humorous. From dropping candy and cake from the ceiling, making a plethora of digs at “rival” Matt Damon, and bringing a group of unsuspecting tourists into the theater to see their reactions on live television, he was definitely a good host for the evening.

Overall, the Oscars were a hit from beginning to end. The Academy did a great job selecting a variety of movies for the win, creating a night full of twists, turns and literal shocks. It was an evening that was exciting and emotional—just as the movies should be.