The Importance of Actresses Using Their Platforms 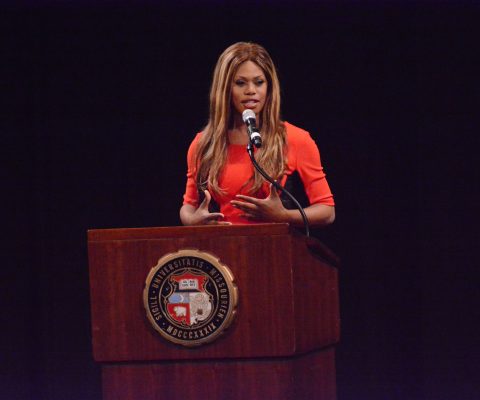 Laverne Cox is a trailblazer in the transgender community. (KOMUNEWS/FLICKR)

There is a long history of women protesting and advocating for their rights; from Seneca Falls to the Women’s March on Washington, the fight has raged on and inspired generations around the world. However, not every movement that women have spearheaded was inclusive; Elizabeth Cady Stanton, one of the main organizers of the Seneca Falls convention was once quoted as stating, “What will we and our daughters suffer if these degraded black men are allowed to have the rights that would make them even worse than our Saxon fathers?” Thankfully, feminism has become much more inclusive, with the organizers of the Women’s March making an effort to diversify their organizers, according to Vox. Not only are movements becoming more inclusive, but their representatives at the forefront of American media are as well. Actresses, singers, models and more are calling themselves feminists, aligning themselves with reproductive rights, immigrant rights and gender equality. Many of these women have shown their willingness to get on the street and protest, as well as speak out about the inequalities they face without fear of repercussions. This Women’s History Month, pay attention to the following women and diversify your thought leaders.

Constance Wu, a Taiwanese-American actress known for her critically acclaimed comedy “Fresh Off The Boat,” routinely makes headlines for her views. She attended the Women’s March in January, allied herself with entertainers refusing to perform at President Trump’s Inauguration and continues to advocate for Asian-American representation in media, both behind and in front of the camera. Most recently, she lambasted the Academy of Arts and Sciences for awarding Casey Affleck, an actor with a past of sexual harassment allegations, an Oscar for his performance in “Manchester by the Sea.” In a series of tweets she discussed her frustration with how Affleck’s past sexual harassment allegations did not affect his chances for winning an Oscar. She ultimately revealed, “I’ve been counseled not to talk about this for career’s sake. F my career then, I’m a woman & human first. That’s what my craft is built on.” Wu’s refusal to let her career stop her from speaking her mind continues to be a driving force in her activism.

Gina Rodriguez, an American actress known for her work on “Jane the Virgin,” has been an avid advocate of not just women’s rights, but also immigrant’s rights and Latinx representation in media. Known for her #MovementMondays on Instagram, which was originally started to highlight Latinxs but now includes people of all backgrounds, she’s also done considerable charity and nonprofit work. Rodriguez proves that she views her career and activism as mutually inclusive, as she often talks about the importance of using one’s platform in order to promote change. In an interview with TV Guide, Rodriguez states, “We are given the blessing of recognition, obscene financial abundance, free things when lord knows you can afford it, and to not use [my position] to create change, to liberate people, seems like a waste of a gift.”

Laverne Cox, a black transgender actress, is not unfamiliar to the feeling of being the “first;” from being the first trans person to be featured on TIME’s cover to the first transperson nominated for an Emmy, Cox has done a lot of trailblazing for the transgender community. Considering that, it is a testament to her selflessness that Cox spends quite a lot of her time putting others first. She’s written a considerable number of articles for the Huffington Post, has spoken out against Arizona’s “walking while trans” law, and has won awards from Gay & Lesbian Alliance Against Defamation (GLAAD) and The Forum for Equality. Cox pushes intersectional feminism, particularly feminism that includes transfolk, describing it in DAME Magazine as, “…about is moving outside of roles and moving outside of expectations of who and what you’re supposed to be to live a more authentic life.”

Just because they are listed, doesn’t mean that the women above are without fault. It also doesn’t mean that you should be inspired by solely the people listed above; take the time to follow Viola Davis, Lupita Nyong’o, Jazz Jennings, Amandla Stenberg, Destiny Frasqueri and more. Think critically about the type of feminism you subscribed to (and if you don’t subscribe to any type of feminism—Why?). It’s important that this month we continue the conversation about intersectionality, particularly when it come to women-led movements. Thinking about the best ways in which to include, not alienate, everyone who supports or is affected by the cause should be the primary work of any movement that seeks equal rights. Even the Women’s March was not without fault, as its platform and imagery, particularly the pink hat, excluded trans and nonbinary people. Chanting “P—- grabs back” in an effort to fight for women’s rights implies that being a woman is contingent on having a vagina, and vice versa, excluding trans, gender non-conforming and non-binary folk.   The upcoming Women’s Strike and A Day Without A Woman on March 8 have attempted to make their platform more inclusive by allowing avenues of participation for women who can’t afford, financially or otherwise, to strike outright. You can participate by wearing red This Women’s History Month, it’s important to not only recognize how far women have come in the last 200 years, but how far we have to go.