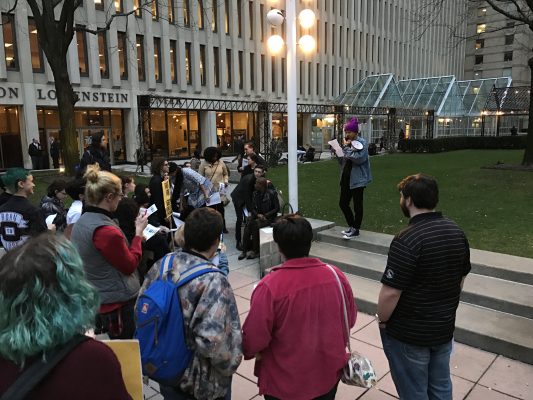 By ELIZABETH LANDRY and CLAIRE HOLMES

President Donald Trump’s recent revocation of Obama-era guidelines instructing public schools to allow students to use the restroom of the gender they identify with has left the power of interpretation up to the states. New York Governor Andrew Cuomo has ordered city public schools to protect transgender students’ use of their preferred restroom. Fordham University’s policies are unaffected by either of these directives, however, as its policies as a Catholic Jesuit private institution are entirely shaped by the administration.

Dean of Students Keith Eldredge confirmed that school policy is not subject to the decisions of politicians except in matters of law, saying that Fordham conforms to the Catholic stance on transgender individuals which maintains that there are two genders and assumes the sex assigned at birth to be permanent. “One of the things that I appreciate about working at Fordham as a Jesuit institution is clearly we’re not going to do anything that contradicts Catholic teaching when it’s very explicit and clear,” he said. “But there is that room, and I think it’s within the Catholic social teaching as well, to take care of each individual student.”

He said that the starting point is a student’s high school records and application materials, which have two boxes for male and female. “We really try to look at each individual student’s situation and try to accommodate the best way we can,” he said.

Anthony Perez, FCLC ’19, is a psychology major and a philosophy minor. He is a transgender man who said he has run into issues since starting at Fordham because his paperwork reflected his assigned sex, but he began physically transitioning while matriculating. Because of this, his student ID and system email account read “Amber,” he has lived in female residential housing since he was a freshman, and every class roster lists him under his former name.

“I was told I would need to get surgery before they would even consider me living with males,” he said. “There are plenty of trans people who don’t want surgeries or realistically can’t afford surgeries because of insurance problems… that just seems unrealistic to expect of people.” He plans to have “top surgery” this summer and subsequently change his paperwork.

“Putting people in housing with their assigned sex, that to me doesn’t necessarily make a lot of sense in terms of safety for students,” he said. “Even in my situation people see my nameplate — which says Anthony because my RA is awesome — but I live with females so they see that and automatically know that I’m transgender.”

Perez says that even though the Office of Residential Life has been “fantastic” in helping accommodate him, Fordham’s policies make it difficult for transgender people to be comfortable. Moreover, the university’s housing policy of requiring a physical transition to change a name and housing situation forces transgender students to come out to the community. “[This] is problematic on so many different levels,” he said. “I have to out myself in front of everyone in all of my classes at the beginning of every semester, a group of 20 to 30 people I’ve never met in my life. I have to constantly out myself to get guest passes. When I go home, people looking at me walk into my own apartment, I’m outing myself….That’s my choice, to put that identity out there, and I don’t necessarily want the first thing people to know about me is that I’m trans before they even get to know anything else.”

The Office of Residential Life did not respond to requests for comment.

Perez said that he has never utilized University Health Services but did not expect Fordham to be able to provide treatment in the case of his transition.

Executive Director of University Health Services (UHS) Kathleen M. Malara, MSN, FNP, said via email that as transitioning requires specialists, the school’s office would refer transgender students outside. She also said that UHS would refer to a transgender student by their preferred identification, and that a student in the process of transitioning would be aided in finding a practitioner that accepts their insurance and is convenient.

Perez said one issue he wishes the school would change is that of gender-neutral bathrooms, which students have pushed for since 2015 citing New York State law. “[The gender neutral signage] completely ignores the conversation of gender and gender expression,” said Perez. “If you can’t acknowledge that this community exists on your campus then you can’t do anything for that community. And you can’t claim to stand with that community if you can’t even acknowledge it.”

The school has answered students by designating single-occupancy lockable bathrooms, which can be found on a list on the university website that shows 35 at FCLC.

A “Trans Lives Matter” rally was held on Feb. 28, on the outdoor plaza, to demand university protection of transgender students.

“I felt like this would be a great time for Fordham to prove that they are an example of trans inclusivity, and to additionally really push for the fact that we need gender-inclusive bathrooms on campus,” organizer Peyton Berry, FCLC ’18 said. “Right now, the bathrooms are gender-neutral in the sense that anybody of any gender can use the restrooms, but we’re looking for signage that actively includes [trans and nonbinary/gender nonconforming] into the Fordham community.”

Under New York law, all single-occupancy restrooms must be designated as gender neutral or unisex. The current signs in Lowenstein and McMahon are typed on laminated sheets of computer paper, and stuck to the doors. They state that the bathrooms are available to “all members of the Fordham community,” and make no reference to sex, handicap accessibility, or gender identity.

Speakers at the rally included current Fordham students and faculty, as well as transgender Fordham alumnus Chris Hennessy, FCLC ’15, who initially started the push for gender-neutral trans-inclusive bathrooms on campus. The speakers put forth personal stories, statements of support, and calls for action from both administration and peers. Hennessy urged listeners to think about change in the short-term.

Rally speaker Jason Sheldon, FCLC ’20, said in an interview that they thought this issue was important because, among other reasons, they feel “uncomfortable… sometimes unsafe,” when going to the bathroom, and went on to add that given the law, “the fact that they keep on pushing back against what trans students are asking for as a right is kind of terrifying.”

In addition to the rally, Fordham recently sponsored its first transgender issues-specific panel, titled “Transgender Politics in New York City and Beyond,” focusing in part on challenges in immigration, healthcare access, and the right to access public spaces faced by transgender people under the Trump administration. The panel was organized by Christina Greer, Ph.D., assistant professor of Political Science, and Zein Murib, Ph.D., assistant professor of Political Science, in order to educate students about how transgender people could access healthcare services and how the law directs the instatement and use of gender inclusive spaces.

The panel was hosted the day after the Trump administration revoked Obama’s federal guidelines. The withdrawal of protections, said Murib, is “unfortunate,” but also “underscores the broader point.”

“It highlighted the necessity of having the conversation about not only visible public figures [such as Caitlyn Jenner]…but also to talk about the fact that people are dying because they are trans, and what that means in New York City, and for Fordham students,” she said.

Ramos-King and Berry both expressed a feeling of fatigue around the ongoing struggle. “It’s tiring for me, and I’ve only been here for a semester,” said Ramos-King, who identifies as genderqueer. They went on to add, however, that the amount of underclassman participation occurring on campus is “very encouraging.”

“I’m not going to get my hopes up, but I think there’s a lot to mobilize off of the first ever trans politics panel, that was really uplifting,” they said.

Meanwhile, Sheldon says, “One thing I would really like at Fordham is inclusive housing…I feel that is kind of the next step,” because “we as trans students deserve to be safe and comfortable with where we live.”

Berry says they will continue to push for explicit transgender protections. “I’m fighting for the visibility and the acceptance and the acknowledgement of trans students on this campus,” they said. “And it’s just kind of ridiculous that we’ve been fighting so hard for something so small.”

Eldredge said he sees the designated single occupancy lockable bathrooms as a compromise for the benefit of transgender community members. “I think obviously we need to make sure we provide an accommodation that people are going to feel comfortable with,” he said. “Is that something that everybody agrees has gone far enough? Clearly not, but I know there’s others in the community that probably think that’s an unnecessary step and it’s nothing we should be doing as a Catholic institution–and I think we can wholeheartedly agree that’s not the case.”

Note: This version has been edited to clarify a reference.