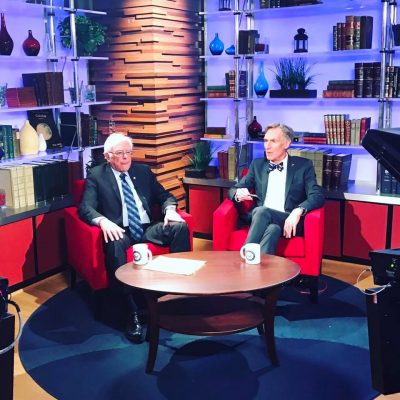 The right’s streak of climate denial must be confronted with fact. (COURTESY OF ARMAND AVIRAM / FORDHAM ALUM)

This past Monday, Feb. 27, two powerful people joined forces to talk about one of the most powerful forces in the world. Engineer and science educator Bill Nye ‘the Science Guy’ and 2016 Democratic presidential candidate Bernie Sanders conducted a Facebook Live stream and discussed what I believe to be the biggest threat to our nation and our world — climate change — and how it intertwines with politics. The conversation, which lasted about half an hour, began with Bernie Sanders criticizing President Trump and his pick for the Administrator for the Environmental Protection Agency (EPA), Scott Pruitt. Trump has claimed that climate change was fabricated by the Chinese, and Pruitt has sued the organization he now runs 14 times. According to Nye, the long-term effects of Trump and Pruitt’s tenures in their respective offices could be catastrophic.

The Science Guy is right. He understands a very basic concept that should be (but is not) widely agreed upon: politics should be based on facts and science. It is hard to fathom the fact that this topic is still a debate. Unfortunately, the United States of America is now a country whose highest elected official (and many of his henchmen) does not base his beliefs and actions on facts. Evidently, “alternative facts” seem to motivate Trump and his team, as Kellyanne Conway, Counselor to the President, pointed out.

This way of thinking is dangerous, but Republicans who defend unconditional party unity do not care. In Sanders and Nye’s Facebook Live stream, Sanders mentioned that many of his colleagues in the Senate believe that “the science really is not clear.” (It is worth noting that this interview came on the heels of the recent Senate confirmation hearing of Scott Pruitt.) Anchors on conservative Fox News, Sanders continued, “don’t agree” that global warming is actually happening. But, as Nye points out, “the science is settled.” The only explanation for why many Republicans still deny that human activity has been the driving force of globally increasing temperatures is party loyalty. These Republicans would say anything to defend the Republican in power and attack Democrats. However, this mentality is just as hazardous as actively denying the effects of climate change.

So, what is the best way forward? Well, step one is admitting that global temperatures are changing; they are changing at an overwhelmingly fast rate, and something must be done about it. As Nye said to Sanders, “that’s where you come in.” The American government has the full authority and responsibility to combat climate change. President Obama knew that: he dedicated $500 million to the United Nations’ climate fund, helped ratify the Paris climate deal and authored the Clean Power Plan and the Clean Air Act (for which Pruitt sued the Obama administration). The right way forward is for politicians to use their power to fight climate change. Nye suggested in the interview that America dedicate less of its resources to the fossil fuel industry and more of it to an organization called the “Solutions Project.” This project is dedicated to making America depend on energy 100 percent via renewable resources, like solar energy and wind energy, and getting started on this path immediately. Nye pointed out that going through with this project would require reconfiguring the electric grid nationwide, erecting wind turbines and making and distributing solar panels. This would create countless jobs, a task President Trump has endlessly promised to complete.

Working-class citizens also have a job to do. First, it is important that we use less fossil fuels when possible. Whether it be classic examples like carpooling or larger-scale changes like using solar panels at home, every action has a butterfly-effect reaction. Secondly, calling and writing to our representatives is vital. They love hearing from their constituents – it is their job. From local representatives to Pruitt himself, every letter or phone call makes a difference. Lastly, I will say something I have been saying since Nov. 8: resist. It may not sound like much, but if you get your voice heard, it inspires others to agree and gets them to act. Be vocal: attend (or organize) rallies and protests write angry tweets or convince a family member at the dinner table. There is strength in numbers, and if we continue to make it known that Pruitt’s and Trump’s denial of real science (and reliance on “alternative facts”) is unacceptable, we can convince them and other lawmakers. Continue to fight – both climate change deniers and climate change itself.