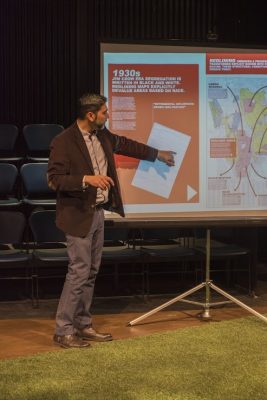 Systemic racism takes many forms—in our everyday language, images in the media and in opportunities (or the lack thereof) given to communities of color.  While the United States government has made efforts to diminish acts of explicit racism, the culture that grew from segregation and Jim Crow laws has inevitably been built into our society.

A prime example of systemic racism exists in housing laws passed in the 1930s and ’40s, turning outright racism into structural racism.  One of these forms of structural racism became known as “redlining,” or evaluating the market value and safety of certain neighborhoods based on their racial makeups. Through this process, the government denied the same services to communities of color, explicitly devaluing areas based on race.  With the suburbanization of the United States and the increasing popularity of mortgaging houses, cities began to assign levels of risk to neighborhoods, redlining areas that had large concentrations of people of color.

On March 3, Fordham College at Lincoln Center (FCLC)’s theatre department held a forum on these issues titled “Redlining: Past, Present … Future?” The forum was held in conjunction with Fordham’s play “Luck of the Irish,” which focuses on the lives of two families: one Irish-American and one African-American, both dealing with the issues of the housing market in early 1960. Carla Jackson, Theatre Program Administrator at FCLC, led the forum on redlining, acknowledging that the play dealt with issues of structural racism that still exist today.

“What we want people to walk away with when they leave the forum on Friday,” Jackson explained, “is a better understanding as to how this racist behavior has damaged, and continues to damage, generations of families. Because if you can’t get a loan for a home or a car, you can’t get a good paying job, and live in a thriving neighborhood.” She continued, “This forces your kids to live in a school and food desert. And that healthcare specialist that you should be seeing on a regular basis is located hours away.”

The panelists, Fordham alumnus Gregory Jost and professor at Fordham School of Law Robin Lenhardt, examined the different ways that redlining has affected communities and the way that certain laws perpetuate structural racism. This issue hits close to home for Fordham Lincoln Center (FLC), as the campus itself is the result of the 1949 Housing Act, which allowed developers like Robert Moses to clear what the government deemed “slums.” Once areas had been redlined the government was given permission to enact slum clearances, like the one that allowed FLC to be built.  Where the Lincoln Center campus now sits became a part of the Lincoln Square “urban renewal project” in 1959, allowing the government to tear down the housing that was already in existence. Acts like these displaced hundreds of families, forcing them to move to areas of lower property value.

Jackson and the panelists explained how laws that target specific groups of people become dangerous. “This shameful practice,” she noted, “which started unofficially in the 1940s, became policy, and remained the status quo for many years, until the laws were repealed.” Jackson continued, “But repealing a bad law does not suddenly make for new and open hearts.”

The repercussions of redlining highlight the racial wealth gap created from a history of racism in the United States.  Both “The Luck of the Irish” and the forum on redlining hoped to exemplify how wealth affects the outcome of one’s life. Racial inequality persists as long as certain groups are denied equal opportunity.  Jackson concluded, “Redlining is more than just a denial of services. It is a denial of prosperity, of education, of life itself.”