Film Adaption of Young-Adult Bestseller “Before I Fall” Out Now 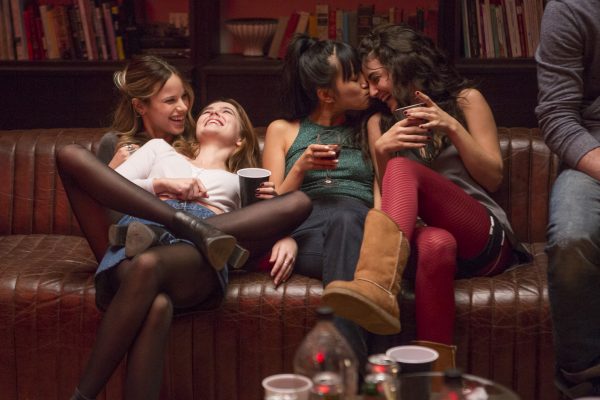 Pictured above (left to right) are Halson Sage and Zoey Deutsch, two of the stars of "Before I Fall" along with the rest of their mean girl clique, Cynthy Wu and Medalion Rahimi. (PHOTO COURTESY OF Awesomeness Films)

Imagine waking up in high school and knowing that it would be the last day of your life. Now, imagine being forced to relive the day of your death over and over and over again until you finally make a significant change in your life. This is exactly what Samantha is forced to do in the new film “Before I Fall.” Directed by Ry Russo-Young and based on the best-selling young adult novel by Lauren Oliver, “Before I Fall” follows Sam (Zoey Deutch) throughout the same 24 hours of her life as she struggles to try to become a better person and save others while also saving herself.

Sam is the nice girl in a group of mean ones, an edgier version of “The Plastics” from “Mean Girls.” With ringleader Lindsay, portrayed by Halston Sage, leading the way, the clique spends their school day superficially, obsessing over their popularity, Sam’s hot boyfriend, and terrorizing Juliet, a quiet outsider. As the school day ends and darkness falls, the girls head to a party where, in their alcohol and hormone infused state, they attack Juliet and then leave the party. As Lindsay drives the group home, they are involved in a crash that instantly kills all four girls.

However, Sam wakes up the next morning in a cold sweat. Unwilling to accept what has happened, Sam assumes she had a creepily accurate nightmare until, like clockwork, the group is killed in the same accident again. Now as Sam is forced to accept her new reality, she is faced with two options: continue her life as normal and stay trapped in her time loop forever or make significant changes to her life to put an end to the chaos.

Of course, the choices are much easier in theory than in reality. The film follows Sam as she is on her own path through the five stages of grief— denial, anger, bargaining, depression and acceptance— as she morphs into a young woman who can die peacefully, knowing she has fulfilled her purpose.

The entire film focuses on Sam’s personal evolution, a journey that required actress Zoey Deutch to do a lot of self-reflection. “The great gift of this part is that it explores the fact that humans are all walking contradictions of themselves,” Deutch explained. “I was able to play so many different versions of a human because that to me is very realistic.” “[The film changed me] in so many ways honestly,” Deutch revealed. “I think it would be impossible to go about shooting this movie and playing Sam without having to do a lot of self-reflection. It was challenging and therapeutic and definitely life changing.”

Deutch, who has previously appeared in the films “Dirty Grandpa,” “Vampire Academy” and “Why Him?,” gives a level of depth and emotion to Sam that we have not previously seen from the actress. She navigates Sam’s complex inner emotions in a sophisticated manner that is at times overshadowed by the film’s overly colloquial teenage dialogue.

Like Deutch, Sage also departed from her usual character to take on the role of the “mean girl.” When asked how she got into the “mean girl” vibe, Sage revealed that she channeled her actions from bullies in her own life. “I’ve known a Lindsay in my life,” Sage laughed as she explained her tactics. “What I really focused on when I was playing her was not so much being mean, but why she was mean,” Sage said.  “When I was able to understand why she was able to treat people the way she did, it helped me get into that mindset of ‘Okay, I’m going to be mean to this person because I want them to feel as broken inside as I feel.’”

Cinematically, the film very closely resembles the style of “Twilight:” both use the fog, mist and mountains that characterize the Pacific northwest to attempt to add an eerie element of mystery and suspense to their story. This change of scenery was one of the few creative departures from the novel Russo-Young took when creating the film. Russo-Young explained that it was important for her to stay true to Oliver’s original work for it has such an intense effect on her. “It wasn’t hard to keep a lot of things the same because I thought they were a wonderful part of the story,” she said. “I sort of trusted in making the movie that we would have a lot of similarities to the book. The core nugget of what made the book so powerful was the end itself. [I hoped] the things that stayed with me in the book would stay with me in the movie as well.”

“Before I Fall” is distinct from other teen-centric dramas in that it truly is unpredictable—the viewers are kept wondering what new revelations Sam will discover next, not just about herself, but about those around her. Although the film is overrun with clichés, it delivers a poignant message about the importance of treating others with respect and dignity that bears repeating, especially in the current social climate we live in.
“Before I Fall” will be released in theaters nationwide on March 3, 2017.