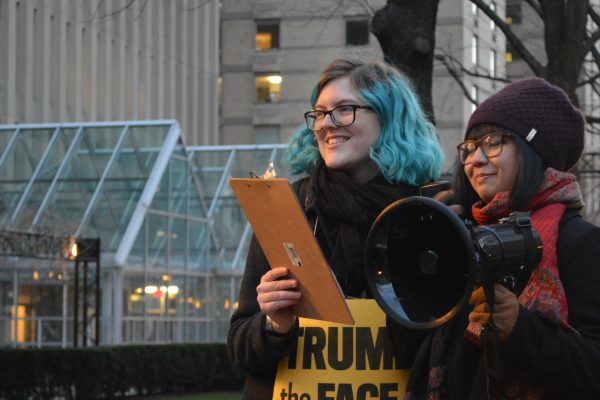 Sapphira Lurie, left, at a protest of the travel ban in January. Elizabeth Landry/The Observer

The university has charged a Students for Justice in Palestine (SJP) organizer for violating the Demonstration Policy. Over 100 faculty members have sent a letter to University President Joseph M. McShane, S.J., to request intervention in the disciplinary proceedings scheduled for Feb. 22, to which the administration has since responded.

Sapphira Lurie, Fordham College at Lincoln Center (FCLC) ’17, helped organize a Jan. 23 rally in support of SJP without approval from the administration. On-campus demonstrations are required to be approved by the dean of students. An application to protest has never been turned down based on the viewpoint or content of the protesters/demonstration, according to the university website.

Lurie, who has never had a disciplinary hearing at Fordham, said that she was involved in organizing the rally, but believed it was sanctioned. “One of our members had met with Dean Eldredge to establish that the rally was going to happen,” she said. “At no point during that meeting did he indicate that the rally was unsanctioned or that we shouldn’t go through with it.”

Dean of Students Keith Eldredge said via email that he would not be able to speak about the disciplinary process for a specific student.

SJP began organizing on campus after Eldredge vetoed their club application on Dec. 22, despite having previously gained United Student Government (USG) approval. The university has stood by Eldredge’s decision, despite statements of solidarity with SJP from USG, student groups and pro-Palestine and freedom of speech groups outside the University.

Eldredge supported the group’s other two rallies on Jan. 26 and Jan. 30 as sanctioned free speech.

The Demonstration Policy states that “each member of the University has a right to freely express his or her position and to work for their acceptance.”

There are exceptions to this rule which arise when participants do things that physically or auditorily hinder the university’s normal functions, employ or threaten immediate violence or fail to designate an “Organizer/Liaison” who meets with the Dean of Students two days or more before the demonstration.

Lurie said that she believed the Policy’s directives to be satisfied. “I was very shocked… to find out that Dean Eldredge, who was the person who personally denied us the establishment of the club, also filed the complaint to himself, noticed the complaint and then decided to pursue disciplinary action against the students involved,” she said.

Lurie requested the ability to bring legal counsel, a faculty advisor or a neutral third party into the hearing, which Eldredge denied. In the Palestine Legal report publicizing the situation, Lurie’s attorney Radhika Sainath criticized Eldredge for being “the complainant, prosecutor, judge, jury and sentencer.”

In their letter emailed on Feb. 21, 121 faculty members wrote: “At every step in this series of events, the administration has evinced a fundamental disregard for academic freedom.” The letter accuses the administration’s veto of SJP of interfering with students’ rights to free association and free exchange of ideas. It also insists that the charges be dropped, that SJP be allowed to proceed, that a new demonstration policy be instituted immediately, and that the Student Conduct Disciplinary process be immediately reviewed and revised.

Professor of English and African American and African Studies Fawzia Mustafa said in a statement that some of the faculty involved saw the ban on SJP to be “an academic freedom/free speech emergency.” She also called Lurie’s engagement in social justice to be a sign of Fordham’s success in achieving its educational goals.

Mustafa called the situation “staggering in its abrogation of fairness, transparency and protections against gross abuse of authority.”

“No matter how evenhanded any given administrator may be, this process abandons any pretense at fairness,” she said.

The Student Conduct Sanctions in the Student Handbook say that when a student has been found responsible for violating a university rule, sanctions range from a reprimand to a student life probation, or group probation, to suspension or expulsion. There is also the po- tential for a university Disciplinary Probation, which bars the individual from representing the school or holding office in a club or organization, with the added possibility of being barred from all extracurricular activities or only allowed on college property “to the extent that his or her class schedule and his or her residence on campus requires.”

“I think that this is a blatant attempt to intimidate me into silence and that it can’t be allowed to stand,” Lurie said. “No matter what they try to do I’m going to have to keep organizing on campus, keep involving myself in causes that I believe in.”

Senior Vice President of Student Affairs Jeffrey L. Gray responded to the faculty letter on behalf of McShane’s appointed staff. He stated that the university supports students’ free expression, but said that the organizers of the rally were “well aware” that they were outside of the policy parameters that are in place.

Of the demonstration and student conduct policies and protocols, Gray wrote, “I can assure you that they are reviewed and updated on a regular basis, current, seek to balance the rights and responsibilities of all parties, and are consistent with standard and best practices in higher education…[our protocols] have consistently held up well under challenging circumstances.”

Gray also said in the letter, “the focus in this matter is on conduct that did not comply with University policy, not expression or speech,” and called it a “low level policy matter.”

Another rally was held on Feb. 21, organized by students from the FCLC graduate schools and facilitated by the Comparative Literature Program, which was entitled a “Solidarity Rally for Student Freedom of Speech.” Speeches focused on solidarity with SJP and Lurie, and other perceived freedom of speech suppressions on campus. Chants included “Dump Eldredge.”

Of this rally, which was not under his purview, Eldredge expressed support, saying “While I may not always agree with the opinions expressed by all of the members of our community, I remain committed to finding ways for them to express them.”

The online version of this article will reflect the results of the Feb. 22 hearing as soon as they are available.

[Update Feb. 24] As reported in Palestine Legal, a contingent of faculty members accompanied Lurie to the hearing with copies of the Student Conduct policies, arguing that the rules did not call for a closed-door meeting or prohibit other individuals from being present. Eldredge stated that he would not meet with Lurie unless they did have a closed-doors, private meeting with a white noise machine turned on. Lurie stated that she could not meet with him under these circumstances and that the hearing must be set for another date.