Are You Being Fooled by Fake News? 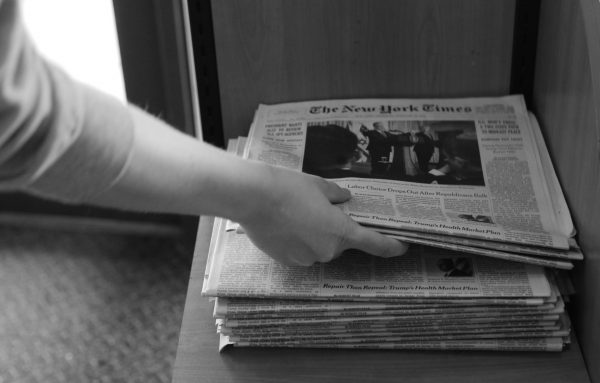 The current political climate has called the legitimacy of trusted news sources, such as the New York Times, into question. Emma DiMarco/The Observer.

The spreading of rumors or “fake news” has always been an issue on social media platforms such as Facebook. 48 percent of college age students use social media as their main source of news, according to BBC News. The plausibility of fake news integrating itself within the other real news articles posted on social media leads to a misrepresentation of information that can impact the judgements of individuals who mainly get their news on social media. After the past election in November 2016, the issue of fake news came to affront companies like Facebook and Google when commentators accused them for influencing voters through false news articles (New York Times).

Without strict regulation to filter through posted content, Facebook has had trouble controlling the user generated content and articles put out by publishing companies using AdSense, as opposed to content created through more traditional and reputable news. This struggle has allowed people to post fake news which falsely informs the public, possibly influencing the public’s opinions in certain affairs.

A particular article stood out among the recent accusations. An article named “Pope Francis Shocks World, Endorses Donald Trump for President, Releases Statement” by Ending the Fed went viral a month before the election, receiving 960,000 Facebook post engagements. This article turned out to be false, after respected newspapers such as the New York Times and the Huffington Post immediately contested the article. It was taken down, but not before thousands of social media users read and reposted it.

In comparison, the top mainstream election story within the same time frame, “Trump’s History of Corruption is Mind-Boggling. So Why is Clinton Supposedly the Corrupt One?” by the Washington Post, received 849,000 Facebook post engagements (Buzzfeed News). Both articles received a high number of social media buzz, grouping them together in the “trending news” tool on Facebook. This grouping led to assumptions that both articles were equally reputable reports of current events surrounding the election, although one ended up being fake.

To tackle the issue, Facebook and Google have tried several measures which include consulting third party news organizations to fact-check articles as well as reconfiguring various posting and advertising policies, creating news tools such as the “Trending News” Facebook sidebar, and banning sites that spread misinformation.

The impact of social media upon news awareness is significant as social media makes it easier to spread false information and manipulate voters. The Washington Post found that with social media, individuals “tend to read and quickly digest ideas and views from individuals whom we already consider “friends” or “followers,” mixing them with those from the news media.” So how does this impact individuals who are reading the news on social media without consulting other established news sources? Research has not established a clear connection between those who have been duped by fake news and the news habits of individuals. However, the more news you read from various sources, the more information you receive and can cross reference.

Overall, the participants representing the Fordham student body show that Fordham students are rather involved and aware of circulating news. Although social media persists as a main source of news, respected news sources like the New York Times, CNN, and BBC are among the most popular news sources to read. The possibility of ‘fake’ news influencing Fordham students over the ‘real’ news is less likely as long as there is open discussion and fact checking that takes place within our community. Although social media has proven to be a platform that allows a large flow of news to be widely shared, students should always consider reading various newspapers as well as discussing with other individuals to stay properly informed.