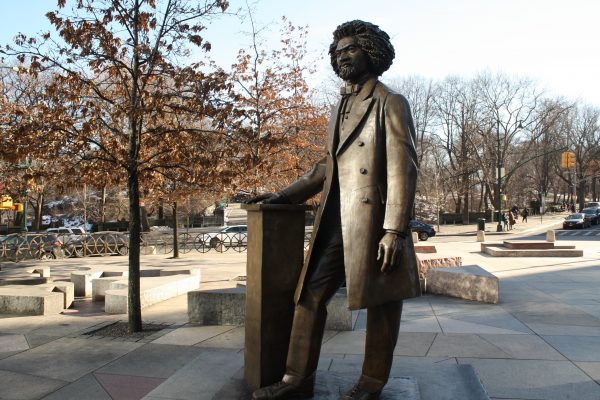 Frederick Douglass is one of the many figures celebrated during Black History Month. (BROOKE PARRETT/THE OBSERVER)

As Black History Month draws to a close, Amir Idris, Ph.D., professor and chair of the African and African-American Studies (AAAS) department, shared his perspective on the month’s designation and the need for an intersectional approach in academia.

“It would be a mistake to limit our focus and concern to a certain month,” Idris said. Doing so, in his view, tells students that Black history is not significant, and that it can be trivialized and ignored throughout the rest of the year. “We need to rethink that approach, [and] make it part of the academic community.”

Fordham University’s AAAS department was founded in 1969. According to a Fordham News article about Quinton Wilkes, one of the department’s founders, it originated as the Institute of Afro-American Studies, and was eventually given full departmental status by the university in 1976. It was formed by a group of determined students who, through campus organizing efforts such as sit-ins, sought the recognition and inclusion of African and African- American history in the school’s curriculum. The current goal of the department, according to it’s website, is to prepare students “to become a global citizen, scholar, and social activist who is sensitive to the demands of an increasingly diverse America and world.”

Idris says that the department also seeks to encourage people to think critically about the roles people of African descent hold in the United States, and to promote “a better understanding of humanity in a globalized world.”

While Idris thinks that many people on campus mistakenly perceive the program as being solely about racial identity, he says the department offers a variety of courses on a range of topics including immigration, gender, colonialism and urban studies. He further believes that the department is a leader in facilitating discussions on the multitude of histories, experiences and peoples within the United States.

Part of that conversation involves having more study and discussion of Black history and the contributions people of color, especially Fordham alumni, have made and continue to make across all disciplines, beyond just the month of February.

Denzel Washington (FCLC ’77) is one of the most well-known graduates of Fordham University, having won two Academy Awards. In 2011, the actor donated $2 million to the university, establishing the Denzel Washington Chair in Theatre. The endowed professorship has hosted such artists as Stephen McKinley Henderson, JoAnne Akalaitis, Kenny Leon, Christine Jones, Joe Morton and Phylicia Rashād.

Whitehead Whaley later became the first Black woman to practice law in North Carolina as well. She served as president of the New York City National Association of Negro Business and Professional Women, and for the National Council of Negro Women, as well as on the Fordham University Council. Today, Fordham Law honors students in the top 25 percent of each class by naming them Ruth Whitehead Whaley Scholars.

The first Black student enrolled at the university is believed to be Matthew Adams, a pre-med student who graduated in 1947. The first African-American man to earn a doctorate in psychology from Fordham, Quinton Wilkes, also helped to found the AAAS Department.

Today, the AAAS program continues to grow well beyond the institute Wilkes and other students fought to have included on campus. This year will see two new faculty members, Tyesha Maddox, Ph.D., a specialist in Caribbean history and culture, and a new member in the fall 2017 semester, joining the department. It is also hosting a symposium on the role of the Catholic Church in American slavery, and is undertaking large-scale research projects such as the Bronx African American History Project (BAAHP), which “is dedicated to uncovering the cultural, political, economic, and religious histories of the more than 500,000 people of African descent in the Bronx,” according to its page on the Fordham website.

The BAAHP has recorded the oral histories of hundreds of Bronx community members, going back to

the 1930s, in order to “provide an in depth portrait of the cultural, political, and social history of Bronx Black communities.” Additionally, the program has partnered with African American and Latino community leaders, a local high school and the Bronx Borough Historical Society to ensure that the “rich history of our borough” is brought to life and shared with the public. It also is undertaking detailed archival surveys

on materials ranging from the papers of civil rights leaders, to materials on Latino jazz in New York, and has a significant amount of its archival collections available for public use, according to its webpage.

Fordham has had a complicated relationship with communities of color. The very establishment of the Fordham Lincoln Center campus had damaging effects on the surrounding African American communities and other communities of color, which were displaced in the construction of the campus and of the Lincoln Center Plaza.The architect of the project, Robert Moses, known as the “master builder,” has been the recipient of many criticisms regarding the displacement and destruction of the neighborhoods which existed at Lincoln Center long before Fordham established a presence here.

However, Idris was quick to note that “Fordham is not unique. This is a national problem.” He remarked that the university has made “steady progress addressing mistakes of the past,” evident in the types of courses offered, the expansion of the numbers of majors and minors, and growing student interest in the AAAS program.

He hopes that the program will “continue to build on this initiative,” and that more people will look at his department as an entity with a “significant role to play in discussing issues affecting American society, and the diverse experiences we all cherish and value in the United States.”