Fordham Students Weigh in on the Charles Oakley Dilemma 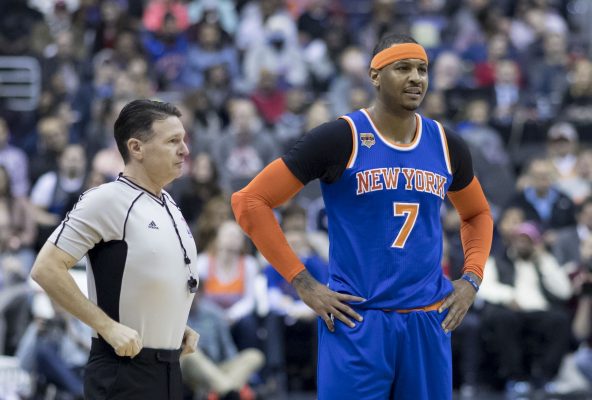 Many players around the NBA rose to support Charles Oakley after his negative treatment by the New York Knicks organization. (PHOTO COURTESY OF KEITH ALLISON VIA FLICKR)

The New York Knicks have become the epitome of a hyper-dysfunctional sports franchise. They have had a disappointing season thus far and have been embroiled in rumors involving Carmelo Anthony and team president Phil Jackson. The latest example of Knicks drama comes in the form of a feud between owner Jim Dolan and former Knicks power forward Charles Oakley.

The dispute came about after Oakley was reported to have been yelling at Dolan from a few rows behind. Dolan eventually asked Madison Garden security to escort Oakley out of the arena, but he refused to leave quietly and struck three guards before being subdued. Oakley was later arrested by the New York Police Department (NYPD) and released. The resulting public relations nightmare by the Knicks pitched many fans against the organization as they suggested that Oakley had greater “issues” and Dolan referred to him as an alcoholic. This entire debacle managed to garner response from many athletes and commentators including Michael Jordan, LeBron James and Draymond Green.

After his initial arrest, Oakley was informed that he was banned from Madison Square Garden, to the dismay of many fans. In the following games, many fans held up signs showing their support for the legendary forward and there were also many chants during home games. Many fans at Fordham, myself included, have been in shock.

Jon Oak, Gabelli School of Business Lincoln Center (GSBLC) ’18, said “To have the one player who embodied the heart and spirit of the Knicks even more than Patrick Ewing treated so shamefully by Jim Dolan is disgusting.” Oak is certainly correct in stating that Oakley’s treatment has been disgusting. Oakley has repeatedly disavowed any claims that he has a drinking problem and has stated that he wants nothing less than an apology from Dolan. To this point neither Dolan nor the Knicks have issued any form of apology. This dilemma did warrant a sit-down of Dolan and Oakley, moderated by the National Basketball Association (NBA) commissioner Adam Silver and NBA legend Michael Jordan, to wipe away the bad blood. While the ban on Oakley has been lifted there still has been no official apology, which doesn’t bode well for the Knicks organization.

The amount of attention that this is receiving will significantly hurt the Knicks in free agency this summer, as many players will be reluctant to join the organization. Paired with the intense trade talks involving Anthony and his feud with Phil Jackson, this team doesn’t look to be a contender anytime soon.

The upcoming free agency classes will include big names like Demarcus Cousins and Chris Paul. As seen in previous seasons, the Knicks no longer have the larger market appeal towards free agents, especially with the new Collective Bargaining Agreement (CBA) rules that allow certain players, like Cousins, record-high extension contracts. It seems that the Zen Master and his eleven rings didn’t garner the amount of attention that Dolan and Knicks fans had hoped. In fact, since he took control of the Knicks, it has been a complete public relations nightmare. He has started feuds with former Knicks players like J.R. Smith and with other major players like LeBron James with his “posse” comments.

Many have questioned Jackson’s leadership and his attachment to the antiquated triangle offense. He let Steve Kerr go to Golden State, where he was able to take the team to the finals twice and won the championship the 2015. He also couldn’t even manage to secure a sit down with marquee free agent Kevin Durant.