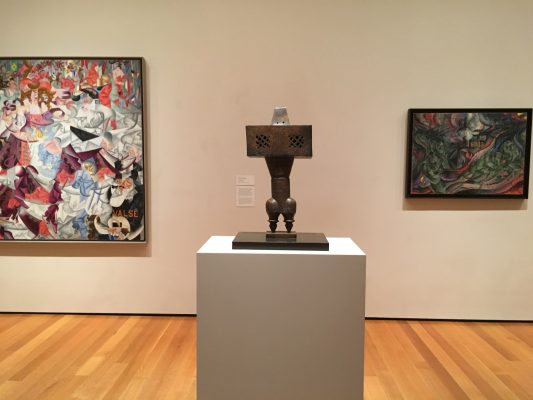 In response to the Jan. 27 order which temporarily bans refugees and citizens of several Muslim-majority countries such as Iraq and Iran from entering America, MoMA replaced several pieces in their permanent collection on the fifth floor, which usually displays European works from the 1880s–1950s, with pieces by artists from the nations affected. With Vincent van Gogh’s famous painting “Starry Night” in the center of the gallery, the fifth floor is easily the museum’s most popular area and therefore most appropriate place for the pieces.

The pieces, seven in total, vary in medium and are placed throughout the exhibit to complement the European works of similar artistic style. The pieces are fairly simple to spot due to their corresponding wall plaques with the museum’s intention clearly written under their titles.

The statement reads, “This work is by an artist from a nation whose citizens are being denied entry into the United States, according to a presidential executive order issued on Jan. 27, 2017. This is one of several such artworks from the Museum’s collection installed throughout the fifth-floor galleries to affirm the ideals of welcome and freedom as vital to this Museum as they are to the United States.”

The works on display are just as diverse as their artists. Some are heavily inspired by Western tradition, like “The Mosque,” a Cubist-inspired painting that merges elements of a mosque such as minarets and Arabic calligraphy with an elongated, masked figure in the center of the image. The work was painted by Sudanese artist Ibrahim El-Salahi, who studied in London and absorbed information about the Western movements of art. At first glance, with its dark, versatile shapes, the work flows seamlessly with the Picassos and Braques hanging beside it; it symbolizes the combination of Sudanese and Western traditions into one, cohesive image. In a similar way, “Lamentations,” a piece consisting of metallic paint and stamped ink on paper by Iranian artist Faramarz Pilaram, combines the geometric aspects of modern European art with Iranian motifs to create a large tapestry-like creation that easily commands the same room as Pollock’s “Number 1.”

However, many of the works also stand on their own as representations of the cultures they embody. Iranian artist Parviz Tanavoli’s sculpture entitled “The Prophet” is a new highlight of the gallery. Using parts from drains, faucets and latticework which were then sculpted in wax and cast in bronze, Tanavoli forged a new form of sculpture entirely. He started an artistic movement in Iran called “Saqqakhaneh,” a word which refers to the public water fountains that are surrounded by metal in the nation. Created in 1964, this piece is one of the newest in the gallery and seems out of place; however, it does stand as an interesting sculpture that differs from the mix.

My personal favorite piece in the collection is simply named “Untitled,” by Marcos Grigorian of Iran. Consisting of soil, sand and mud on the canvas, the artist wanted to capture village life in Iran by making art from the materials used to construct a typical, adobe-like home. The layering of mud and soil add an element of physical dimensionality to the piece, easily catching the light in the room at all angles. The artist made this work from Iranian materials, so the work functions as an actual representation of Iranian life and is easily a piece to remember.

MoMA’s new installments show how art can clearly make an impact. With only seven pieces, the museum is successfully displaying odes to Middle Eastern culture that stand in silent protest of one of the most controversial executive orders to date. Because art is a universal form of communication, the museum’s message speaks clearly to people of all cultures that art is a powerful medium to express one’s voice, and that it can be more potent than any traditional form of protest.

Currently, the exhibition has no end date.