Sleutjes Succeeds as Student and Swimmer 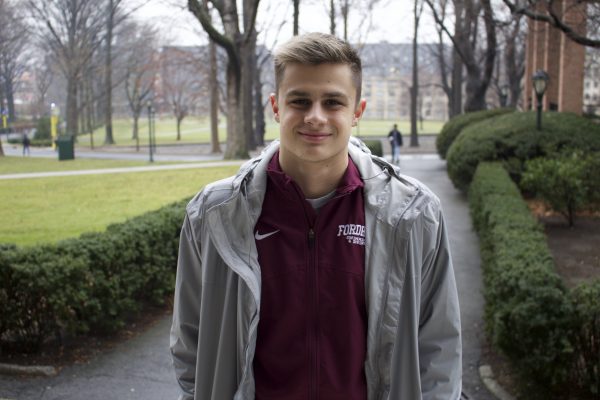 Sleujtes has learned how to thrive both in the classroom and in the pool. (ASEAH KHAN/THE OBSERVER)

Hailing from over 1,000 miles away in Sherman Oaks, California, Christopher Sleutjes, Gabelli School of Business at Rose Hill (GSBRH) ’20, is a freshman on the Fordham University swim team. He specializes in the butterfly, freestyle and distance races. In swimming he has specifically taken part in the 500 yard, 1,000 yard and the mile races. Sleutjes said his favorite event to compete in is the mile. As a freshman who came from across the country, Sleutjes had to learn how to handle everything New York had to offer, from the weather to all the attractions just a few subway stops away. Balancing school, athletics and a social life seems like a lot, but Sleutjes has managed to do it all, while having time to visit Manhattan every now and again.

After practicing nine times a week and competing in many different swim events, the team shares many moments together. According to Sleutjes, they become like a family. With all the moments they share with each other, it may seem hard to pick one that stands out, but Sleutjes decided his favorite was competing against the University of Massachusetts.

“My favorite moment on the team was this weekend when we beat the University of Massachusetts for the first time in school history and being a part of that was a great experience,” Sleutjes said.

Before coming to Fordham and sharing these moments with his teammates, Sleutjes had to get his start somewhere. He began swimming on his church’s swim team and has been swimming for approximately 14 years now. His favorite part of Fordham’s team is that since they practice nine times a week together there is a real family atmosphere. He believes that “it is a great community feel knowing that your teammates are always there by your side.”

During his time at Notre Dame High School Sleutjes managed to maintain a high GPA and attain a high PSAT score that earned him the title of being a National Hispanic Merit scholar. This title is given to students across the nation who score high enough on the PSAT their junior year and have maintained a 3.5 GPA or higher.

“I am Mexican American and won an award for my test scores, so I got to be a part of the program, and it’s actually how I got a scholarship to Fordham, which opened many doors by making the school affordable for me,” Sleutjes said.

Along with this, during his four years of high school, Sleutjes’s grades earned him the honor of magna cum laude. This year, Sleutjes became a student at the Gabelli School of Business at the Rose Hill campus majoring in finance. He says he is still trying to decide between finance and accounting. He loves the Jesuit education and being at Fordham has surpassed all his expectations. Sleutjes exclaimed that Fordham is great, and he loves being a Ram.
Sleutjes found out about Fordham from his friends back home, which resulted in him gaining interest and applying to the school. He chose Fordham over schools such as Boston College and Tufts University, that also gave him offers. However, no other school offered him what Fordham did. Sleutjes believes that he is getting “the best of both worlds [at Fordham]. I receive an affordable education with a chance to compete at the division one level.”

As for being in New York, for Sleutjes, the hardest part is adjusting to the weather. He doesn’t believe that there is much a difference in the people or the way of life compared to how it was back home Although New York gets a bit cold for him, he believes everything is great as is. To combat the idea of being far away from home he calls his parents and friends all the time. His parents are even flying out to his swim meet in February. Despite missing home at times, Sleutjes still manages to take advantage of the city and have fun. In fact, he goes on weekly adventures with his friends where they explore New York and find the best burger spots.

When it comes to — upcoming events, Sleutjes is looking forward and currently training for the swimming Atlantic 10 Conference that takes place Feb. 15–18. Most importantly, he is ready to focus on getting work done in and out of the pool. Sleutjes not only values his time in the pool, but is very focused on receiving the best education possible at Fordham.