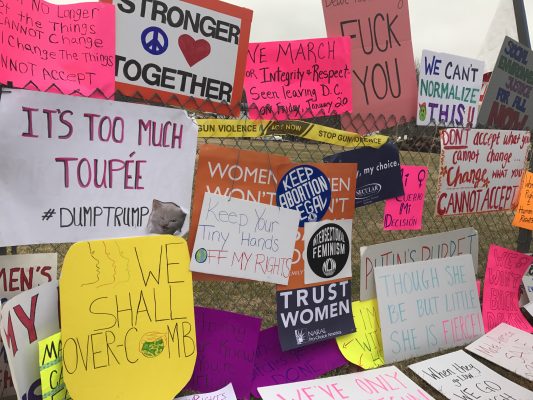 The 20th and 21st of this January will stand out in history as two gravely important, albeit controversial days in America. The 20 saw the inauguration of Donald J. Trump as President of the United States. The 21 saw one of the largest protests in American history, against him. The Women’s March drew together an estimated 4.8 million people from all 50 states and seven continents (yes, even Antarctica). Exactly how effective this march was in swaying Trump has yet to be seen. In the last two weeks, he has stuck to his wild campaign promises, signing executive orders as though he were giving out his autograph. In the wake of the extreme measures already passed, the terrifying ones that have yet to come, and how determind the administration is on lying to the public, the American people have to prove their commitment to halting fascism in all its forms.

The 2016 presidential race was a long, horrifying road that ended in a way most professionals couldn’t predict. On the day of the election, pollsters predicted that Trump had less than a 25 percent chance of winning. Hillary Clinton won the popular vote by nearly three million. Let me repeat that figure: three million. This is only the fifth time in American history that a candidate won the presidency despite losing the popular vote, due to the antiquated Electoral College. The day after the election also saw widespread protest, as well as the trending hashtag “#NotMyPresident.”

The 2016 election became a forum for the American politics on women’s rights, minority rights, LGBTQ+ rights and immigration. Now, under the Trump administration, marginalized groups fear for their civil rights and lives.The prominence of neo-Nazis like Richard Spencer and Steve Bannon in Trump’s America are terrifying enough.

It isn’t just the politicians Americans fear. The day after Trump’s election win, reports of violence against women, minorities and LGBTQ+ people poured in across the country. With celebrations by the KKK and giant swastikas spray-painted on walls, the United States has dialed back to the 1930s.

Knowing that there are average American citizens perpetrating these acts is the most subtly terrifying part of the last three months. It may be easy to forget, as well. The Women’s March was about more than just Trump. The marches were a stand against the rhetoric that Trump and the far-right in America spew like sewage.

Protesting Trump is vital, every minute of every day. Those of us that didn’t vote for him, those of us he does not represent, must involve ourselves in everything possible to prevent him from destroying the social progress of the last forty years. At the same time, our efforts must be focused on the everyday. Richard Spencer has been punched in the face twice since the election, both times on camera. The racism, sexism, homophobia, xenophobia, and transphobia in America can be combated at more than just a legislative level.

Even within the Women’s March and the Democratic Party, things aren’t perfect. Corruption within the Democratic Party led to Bernie Sanders losing the nomination, even though early polls showed he would have defeated Trump in a landslide. Even now, as legislation is being passed at a rapid-fire rate in Congress, left-leaning politicians are cowering away rather than taking a stand.

Bigotry doesn’t end with explicit statements or actions. Case in point: the Women’s March. Countless signs in numerous cities boasted slogans centered around female anatomy: “P**sy grabs back” and “No Uterus, No Opinion” come to mind. The intentions of these signs and others are clear and well-meaning. After the shocking things Trump has said about sexually harassing women, of course the natural response would be to twist his words around and reclaim them. The problem arises when these sorts of slogans become the embodiment of the Women’s March, or the modern feminist movement. After the march, “P**sy grabs back” seems to be the one slogan that had the most power. What this slogan and others end up doing in the process, is essentially saying that having a vagina is what makes someone a woman. That anyone who doesn’t have a vagina doesn’t matter in these scenarios, effectively eliminating transgender people from the picture.

That isn’t to say that this message is on purpose—far from it. As a trans person, I completely understand the intent behind the slogan, and have nothing but respect for it. However, in its popularity, it does end up a bit alienating. My identity as female is not defined by my anatomy, and my voice is just as important.

This is just one example, though, and a mild one at that. It should remind us to be conscious of our own actions in this dark time. Participating in a protest does not mean exoneration if you make a mistake. We all have to be held accountable. No matter what, though, our protest, our actions, our mindfulness and our voices are what matter.