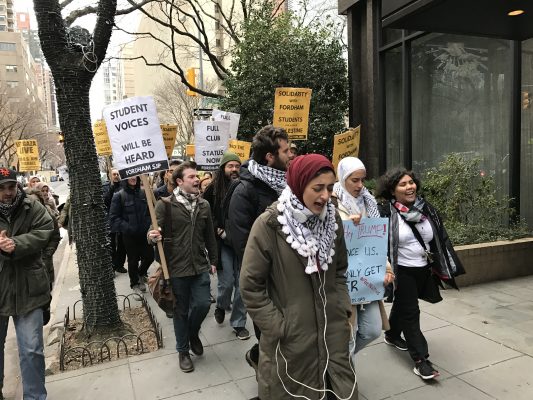 The Foundation for Individual Rights in Education (FIRE) and the National Coalition Against Censorship (NCAC) are doubling down on their criticism of Dean of Students Keith Eldredge’s Dec. 22 decision to deny a prospective Students for Justice in Palestine (SJP) club official status.

FIRE and NCAC first wrote to the Fordham administration on Jan. 25, stating that the “rejection of SJP violates the free speech promises Fordham makes to its students and must be overturned.”  In response, Senior Vice President for Student Affairs Jeffrey L. Gray forwarded them his Jan. 20 letter to Palestine Legal and the Center for Constitutional Rights (CCR), according to FIRE.

The organizations have now authored a second letter, addressed to Gray on Jan. 27, stating that his reply to Palestine Legal and CCR “fails to adequately address our concerns.”

“Refusing to grant SJP recognition because of the actions of unaffiliated individuals at other institutions is flatly inappropriate and violates Fordham’s explicit promises of free expression,” they continue.

FIRE and NCAC also cite Healy v James, a Supreme Court case that they, Palestine Legal and CCR have cited in previous correspondence with the university. In the case, the Court “noted that guilt by association is an illegitimate ground upon which to restrict students’ expressive rights” and rejected the argument that a college could deny recognition of a student group “based on speculative fears that it would be disruptive on campus.”

They conclude their argument by stating that “while Fordham University is not bound by the First Amendment, it is bound by the explicit promises of free expression that it makes to its students. Your university may not lay claim to the intellectual vitality that results from freedom of expression and the marketplace of ideas while simultaneously prohibiting students from forming a student organization because of administrative disagreement with their beliefs and baseless fears of disruption. If your commitment, as stated in your January 20 letter, to “protect[ing] the ability of all . . . students to voice their political views” is to mean anything, Fordham must immediately reverse course.”

FIRE and NCAC state that they “are committed to using all of the resources at our disposal to see this matter through to a just conclusion” and request a response by Feb. 3

Other organizations, such as PEN America as the Middle East Studies Association, have written to the administration in order to criticize the SJP veto. New York City Students for Justice in Palestine (NYC SJP), the US Campaign for Palestinian Rights, and Jewish Voice for Peace have also aired support for the students seeking approval for a Fordham SJP.

The Committee for Accuracy in Middle East Reporting in America (CAMERA), the Simon Wiesenthal Center and AMCHA have all aired support for the veto, according to the Jewish newspaper the algemeiner. Fordham also recently received support from Proclaiming Justice to the Nations, a group “established to educate Christians about their Biblical responsibility to stand with their Jewish brethren and Israel, utilizing the powerful medium of documentary films to facilitate dialogue between the Christian and Jewish communities.”