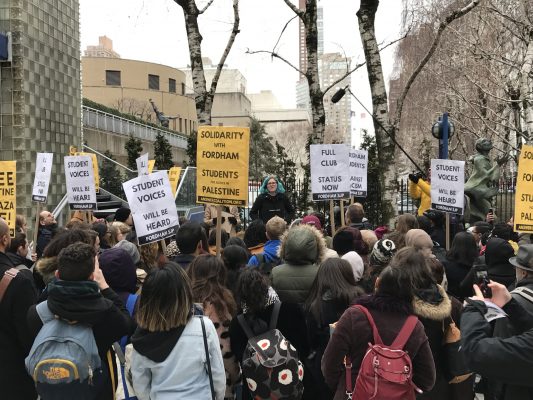 Fordham is standing by Dean of Students Keith Eldredge’s Dec. 22 decision to deny a prospective Students for Justice in Palestine (SJP) club official status, while organizations continue to write letters to the administration criticizing the move.

Gray writes that the decision “was based on the fact that chapters of this organization have engaged in behavior on other college campuses that would violate this University’s student code of conduct.” As an example, Gray says that “the Fordham University code of conduct would not permit students to disrupt public speaking events.”

Disruption of public events is a tactic of SJP chapters cited in a 2015 report on the organization by the Anti-Defamation League, an organization that “fights anti-Semitism and all forms of bigotry, defends democratic ideals and protects civil rights for all.”

“Rather than supporting free speech at those events, SJP’s actions at other campuses have actually attempted to restrict free speech,” Gray continues. “Such behavior is antithetical to our values and code of conduct.”

Although the students seeking approval for Fordham SJP asserted that the club would be independent from the National Students for Justice in Palestine (NSJP), providing a letter from the organization corroborating their autonomy, confusion persisted between the parties involved regarding the relationship between the club, the NSJP and other SJPs.

“When asked to change the name of the proposed club and to distance themselves from the national organization, our students declined to do so,” Gray says in the letter. He continues that Fordham SJP has chosen “to affiliate with an organization that engages in behavior that is inconsistent with the University’s code of conduct” and that the influence of this “external organization” on the club could “adversely impact our students and our campus community.”

The NSJP’s website states that “beside sharing our points of unity as a guide, we do not dictate to SJP chapters: all individual SJPs are autonomous student orgs on their respective campuses.”

Gray’s letter also echoed the statement that Eldredge previously provided The Observer on the university’s decision.

He continues, “I want to emphasize that the University will protect the ability of all of our students to voice their political views–including students involved in attempting to organize a Fordham chapter of SJP. But that political dialogue must take place within the norms of civility set forth in the University’s code of conduct.”

He concludes that he and his staff “would welcome the opportunity to meet with these students to facilitate an appropriate forum for debate on the issues confronting Palestine and the Palestinian people.”

Palestine Legal and CCR responded to Gray on Jan. 26, stating that his letter “misconstrues the facts, misunderstands the law, and ignores Fordham’s contractual obligations to respect students’ freedom of expression, as promised in various University policies.”

They also cite the U.S. Supreme Court case Healy v. James, which “held that the denial of student group status based on the actions of a national group violates associational rights under the First Amendment.”

In the case, which Palestine Legal and CCR state is an “apt analogue” to the Fordham SJP situation, “students at Central Connecticut State College applied to start a Students for Democratic Society (SDS) chapter on campus.” The college president rejected their application on the grounds that it would be a “disruptive influence” and because he “doubted the group’s independence from the national organization,” even though the students had stated that their group “was not under the dictates of a national organization.” The Supreme Court ruled in favor of the students.

The organizations continue in the letter that “NSJP, a separate, independent organization, has not engaged in ‘disruptive’ activity,” stating that many of the claims of disruptive activities levied against SJPs are “unsubstantiated.”

They also add that “there is no ‘civility’ exception to free speech,” citing College Republicans at San Francisco State v. Reed, which held that restricting the free speech of a student group based on concerns of civility was unconstitutional.

The final section of their letter states that “Fordham’s banning of SJP raises concerns under Title VI of the Civil Rights Act,” an assertion they made in their Jan. 17 letter.

They conclude by offering to schedule a meeting with Gray, “along with students interested in starting an SJP.”

The Middle East Studies Association (MESA), the Foundation for Individual Rights in Education (FIRE) and the National Coalition Against Censorship (NCAC) also wrote to the Fordham administration, criticizing Eldredge’s decision.

MESA wrote to Eldredge on Jan. 23, stating that “This decision violates the principles of academic freedom and the right to free speech. By attempting to suppress rather than encourage dialogue buttressed by critical thinking, it also threatens the principles and tradition to which Fordham as a Jesuit educational institution professes to adhere.”

While MESA states that as an organization it does not have a position on SJP’s political platform, they “vigorously support the rights of students and faculty to form organizations to advocate for their political views” and call upon the university to reconsider its decision on SJP in order to “uphold the commitments” articulated in Fordham’s mission statement.

FIRE and NCAC wrote a letter to McShane on Jan. 25, stating that Eldredge’s decision “violates the free speech promises Fordham makes to its students and must be overturned.”

They state that their understanding of the facts is largely based on the information provided by Palestine Legal and CCR in their Jan. 17 letter to McShane and ask that the University inform them of any believed error.

The organizations argue that “while Fordham is a private university and thus not legally bound by the First Amendment, it is both morally and contractually bound to honor the explicit, repeated, and unequivocal promises of freedom of expression it has made to its students,” citing the university’s Mission Statement, Demonstration Policy and Bias-Related Incidents and/or Hate Crimes Policy.

They state that “Fordham May Not Deny SJP Recognition Based on Its Disagreement with SJP’s Purpose and Goals,” citing Healy v. James. They argue that “Disagreement with a student organization’s expression is not a legitimate basis for denying it recognition,” citing the College Republicans, College Democrats, the Rainbow Alliance, the Environmental Club and the Feminist Alliance as clubs that already exist on campus “whose sole purpose is advocating political goals of a specific group.”

In the second section of the letter, FIRE and NCAC assert that “Fordham May Not Deny SJP Recognition Because Its Expression May Be ‘Polarizing.’” They cite Terminiello v. Chicago and state that “The Supreme Court has explicitly held, in rulings spanning decades, that speech cannot be restricted simply because it may be controversial.”

They have requested a response by Feb. 7.