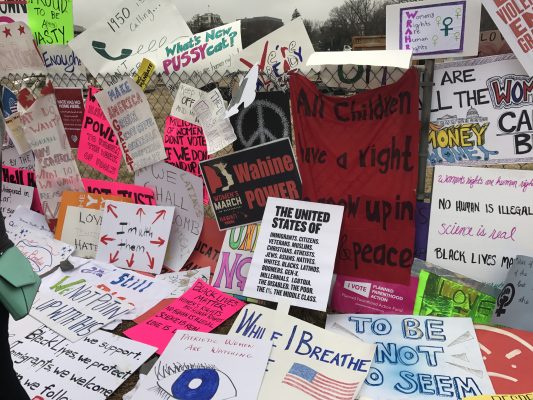 Protestors participate in the Women’s March on Washington on Jan. 21, 2017, the day after the inauguration. (ADRIANA BALSAMO-GALLINA / THE OBSERVER)

On Nov. 9, 2016, more than half of the United States found themselves in shock as the results of the presidential election became obvious. Three months later, on Jan. 21, 2017, more than 3 million people across the United States expressed their discontent in what is now being called the biggest collective demonstration in U.S. history.

As Donald Trump took his seat in the Oval Office this week, a crowd of around 500,000 people took to the streets of Washington D.C. to protest the 45th president and his policies. The “Women’s March on Washington” hoped to exemplify the outrage felt throughout the country, focusing especially on equality and inclusion, fighting against a leader who people feel is not an accurate representation of their political views. It was a march to express the fear and anxiety that Trump and his cabinet represent to women, people of color and minorities.

While the organizers of the march expected around 200,000 protesters in D.C., the total count was at least double their estimation.  The energy level was palpable as the crowds emerged from the metro station and as trains pulled up to the Judiciary Square stop, the platforms became too crowded to maneuver.  Even with the growing number of people, however, a sense of safety and peace pervaded the general feeling of the crowd. A sea of pink hats and creative posters weaved toward the exit and amidst the crowd, a plethora of young children clinging on to their parents’ jackets.

Among those protesting were a number of Fordham students, including Saim Alam, Fordham College at Lincoln Center (FCLC) ’20.  While every person had their own particular reasons for marching, Alam felt that President Trump’s election directly affected his and his family’s future.  Alam said, “My future as a gay person of color will depend on our resilience in times like these.”  He continued, “I have two little sisters whose futures will be shaped by the strength of our resistance now.”  While marching for equality on every platform, Alam made it obvious that the Women’s March on Washington should look specifically at Trump’s policies that will target women in America. “On the anniversary of Roe v. Wade,” he explained, “50 years later we sit here worrying about a woman’s right to choose being stripped away from her.”  A large portion of the propaganda at the Women’s March focused on just this: a woman’s right to legal and affordable healthcare.

It also became clear throughout the march that Trump’s blatant sexist, racist and bigoted language was one of the main reasons for the resistance, and it would not be tolerated.  “I marched because I had to,” Gillian Nelson, FCLC ’19, explained. “I have reached a point in my life where I refuse to believe that complacency is justifiable.”

However, this is not to say the march did not encounter backlash or resistance.  Although no arrests were made at the march in Washington D.C. and the pro-Trump resistance was minimal, many liberal communities took issue with the reappearance of feminism that did not seem to incorporate the intersectional nature of these issues.  Nelson said, “I was taken aback by how white and privileged the space was.”  She continued, “It was clear that many of the women marching in D.C. had the privilege to travel there from afar, not have to work that day and have the safety to express their ideas without fear.”  Nelson went on to express concern that although these women showed up for the March on Washington, they may not necessarily have shown up for other demonstrations of equal importance. “I was concerned that these women may not show up to a Black Lives Matter protest,” she said, “or any other demonstration that doesn’t necessarily include a white feminist agenda.” Issues like these will require the understanding and promotion of equal rights on every level.  While the march was an important message for Trump’s presidency, certain flaws that may need to be improved upon in the next demonstration were made evident.
“I marched because I had to…I have reached a point in my life where I refuse to believe that complacency is justifiable.”
What the future holds for American politics remains unclear.  What is obvious is that change will have to continue coming from the public, from a democracy that is willing and able to mobilize against a government that they cannot stand behind.  When asked how he will continue to use this energy to promote change in the future, Alam said he plans to stay involved on a local level, working with politicians in New York and his home state of North Carolina.  Nelson also hopes to create change within her community. “Sometimes we forget the injustices happening right in our very own backyard,” she said.  “For example, just recently, Fordham banned a student organization advocating for Justice in Palestine,” Nelson added. “This type of censorship follows the same troubling narrative of this election season in the sense that it includes the silencing [of] marginalized groups.”

While it is important that we continue to recognize the flaws within our democracy, both in this election season as well as the Women’s March on Washington, it is equally important that we do not discourage the population at large from advocating for what they believe in.  The Women’s March brought out millions of people who refuse to accept Trump’s agenda. In order to enact change in our government, it will be crucial that the public’s opinions continue to be known. Despite the complicated issues that became obvious for her at the march, Nelson noted, “I did find it incredibly beautiful to experience a public space filled with so many females in solidarity with one another. It is a feeling I will never forget.”