Inside Trump’s Days at Fordham 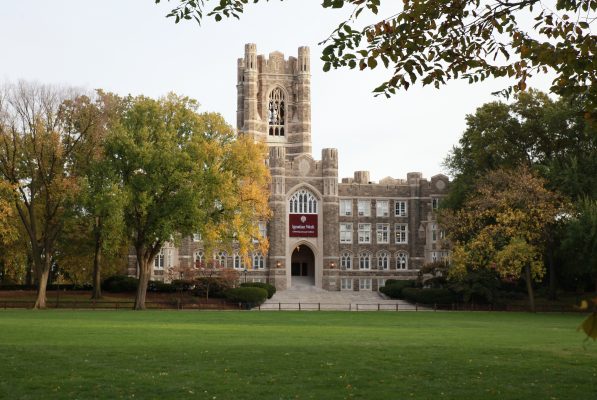 President Donald Trump likes to talk about the fact that he went to the Wharton School of Business at the University of Pennsylvania, mentioning his academic achievement in his book “The Art of the Deal” and throughout his presidential campaign.

Trump, however, did not spend all four years of his college career at the University of Pennsylvania’s prestigious business school. Before earning his degree in economics, he was a student at Fordham College at Rose Hill (FCRH) for two years.

Today’s Fordham students expressed mixed feelings about Donald Trump’s time at the Rose Hill campus. Ranging from indifference to happiness to one sophomore feeling “terrible” that the President’s name is tied to her college.

Although Trump boasted about attending Wharton, Fordham wasn’t his first choice of college, and real estate wasn’t his first choice of career either. Trump originally wanted to be a movie producer, according to Newsweek. When he was rejected from the University of Southern California, he chose to attend Fordham until he eventually decided to pursue business and transfer to the University of Pennsylvania. “That’s where he got in,” Trump’s sister, Maryanne Trump Barry, said regarding his decision to go to Fordham in Gwenda Blair’s “The Trumps: Three Generations of Builders and a Presidential Candidate.”

During Trump’s time at Fordham, he would’ve studied topics such as Islam, Socrates, Aristotle and logic, according to John T. Carey, FCRH ’68, in The Chronicle of Higher Education.

Trump also chose to attend Fordham at a historical time for the university. Joan Ann Poroski had just become one of the first women admitted to the university’s undergraduate student population, as reported by The Fordham Ram at the time. Trump himself, however, did not leave “footprints” at Fordham, despite playing squash, according to President of the Fordham College Alumni Association Paul F. Gerken, FCRH ’68, in The Chronicle.

The Fordham community, however, was not the only place that Trump didn’t leave his footprints during his college years. Using his status as a college student, Trump successfully received draft deferments for the entirety of his college career, avoiding service in the Vietnam War.

“Trump had avoided the draft—and the possibility of being sent to fight in the Vietnam War—by obtaining four separate deferments so he could stay at Fordham University and the University of Pennsylvania,” according to The Washington Post.

Even though he could have been conscripted once he graduated, he was “medically disqualified” after he failed an armed forces physical examination on Sept. 17, 1968, two months after he graduated from Penn. His disqualification resulted from “small bone growths on his feet called heel spurs,” according to The Times (London).

Trump’s days at Fordham concluded with the end of the spring 1966 semester. “I decided that as long as I had to be in college, I might as well test myself against the best,” Trump wrote in “The Art of the Deal” on his decision to transfer to Wharton. With the help of an admissions officer who was a high school classmate of Trump’s older brother, Freddy, he traded the ivy-mantled walls of Fordham’s Rose Hill campus for an ivy league degree.

Trump’s short time at Fordham has left students with mixed feelings about his attendance, but some students such as Kyoka Millard, Fordham College at Lincoln Center (FCLC) ’19, would rather just forget that he went there. “I feel pretty terrible about it,” she said regarding the President’s connection to the college. “I’m really proud of the fact that Fordham has kind of disavowed him and been very open about being welcome to immigrants.” Fordham President Rev. Joseph M. McShane, S.J., recently pledged his support for undocumented students in a written statement emailed to students.

Other students who voted for Trump, such as Andrew Budisak, FCLC ’20, hope that students on all sides of the discussions over Trump can see eye to eye.

“Not everyone on either side is representative of the candidate as a person and no one is a representation of their whole party,” he said. “Although you have the right to disagree and be angry and have fear, there comes a point where you need to actually unite and discuss to actually get things done.”

Trump may have left Fordham for the same reason as most transfer students: the college just wasn’t for him.

“I think there’s a good reason he didn’t stay for all four years,” Renee Garrahan, FCLC ’18, said. “I don’t think it was the right fit for him.”