Learn the Truth Behind “The Zookeeper’s Wife” 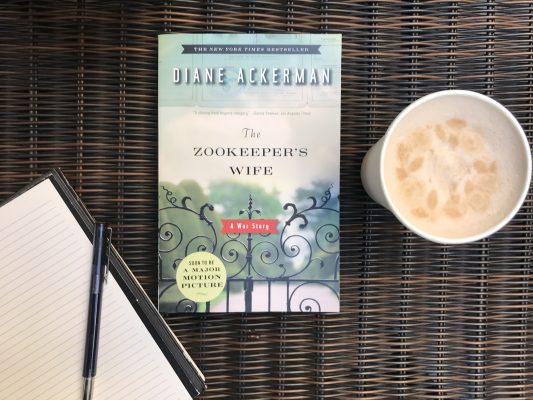 The book, which can be found in the Quinn Library, will soon be turned into a motion picture. (JILLIAN JAYMES/THE OBSERVER)

Poland, 1935. The Warsaw Zoo is thriving. Recently bought by Jan and Antonina Zabinski, the menagerie is quickly being turned into one of the premiere animal establishments in Europe, with groundbreaking new methods for housing their animals that include making several “mini ecosystems” based on each animal’s home environment.

Poland, 1939. The German Blitzkrieg has turned the once prosperous zoo into an almost abandoned pile of rubble. Antonina Zabinski and her young son Ryszard have fled the area to seek asylum in the country while Jan stays behind. The magnificent zoo is now nothing more than a heap of trash that the Germans commandeered to use as a pig and fur farm for their soldiers. At least, that’s what it appears to be on the outside. In reality, the ruined zoo is now the underground location of the Polish resistance and a refuge for Jews who have escaped from the Warsaw ghetto.

This is the picture that Diane Ackerman, famed American poet, essayist and naturalist, paints in her historical non-fiction novel “The Zookeeper’s Wife.” Based off of Ackerman’s own research and the diary entries of Antonina Zabinski, the novel is the astonishing true story of the Zabinski family’s efforts in aiding the Polish resistance during World War II and hiding hunted Jews right under the Nazis’ noses.

“The Zookeeper’s Wife” does not read like your average historical non-fiction book—it feels more like one of Ackerman’s poems, filled with descriptive diction and imagery. She does not simply write that “boys rowdily play outside,” but insteads opts to describe their activities as “taking part in a timeless ritual designed to rouse nature from her slumber and fill the trees with fruit, the land with a rich harvest.” Even the Zabinskis’ story itself, successfully hiding 300 displaced Jewish individuals at the same location where German soldiers stayed, seems too outlandish to be true.

The Zabinskis successfully hid these refugees by creating codenames for all of their Jewish fugitives— animal names. Prior to the start of World War II, Antonina and Jan gave all of their zoo animals that lived in their villa human names based on their distinct personalities. To the Zabinskis, these animals were part of their family and deserved to be treated as such. When Jewish fugitives started fleeing to the zoo, the Zabinskis knew they had to be extremely careful when referring to their secret guests. And what was the easiest way to refer to things in a zoo? As animals. Each family that arrived was given an animal name—squirrel, giraffe, elephant—that the Zabinskis would use when talking about them in front of others. “The squirrels need to be fed” was really code for “the family hiding in the squirrel lodge need food.”

One of the most polarizing aspects of Ackerman’s book is the way she abruptly, yet smoothly, transitions from scenes of total carnage as a result of Germany’s occupation of Poland to whimsical and lighthearted descriptions of the beauty of nature and its animals. As a reader, it can be slightly unnerving to read a lengthy description of the endearing escapades of the family’s pet badger, followed by an equally long description of a bombing that destroyed half of Warsaw. This uneasy feeling is exactly what Ackerman needs to get from her readers to call this novel a success—it transports the reader directly into the ruins of the Warsaw Zoo, hiding in cold, cramped cages while surrounded by German soldiers whose jobs are to capture you.

Upon its release in 2007, “The Zookeeper’s Wife” was received well by the literary community, winning the Orion Book Award and landing the number 13 spot on The New York Times’ non-fiction best seller list. Now, the Zabinski’s tale is being turned into a movie. Jessica Chastain (“Zero Dark Thirty”) stars as Antonina Zabinski, with Belgian actor Johan Heldenbergh starring as Jan Zabinski. The film will hit theaters in March of 2017. In the meantime, you can find a copy of this war story in the Rosenblatt Holocaust Collection in Lincoln Center’s Quinn Library.