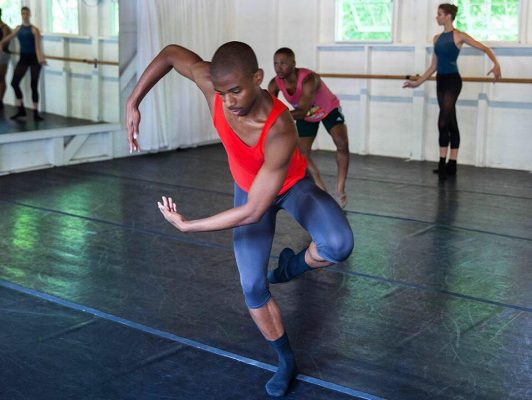 Christopher Wilson, Fordham College at Lincoln Center (FCLC) ’17, is spending his senior year the way all aspiring dancers dream of—touring the country with the renowned dance troupe, Ailey II. Having completed all academic requirements for a B.F.A. in dance performance, he is now completing his degree by earning credits through professional performance work.

Ailey II is the second company of the legendary Alvin Ailey American Dance Theater (AAADT). Members of Ailey II perform for up to two years as a starting point in their careers, working under Ailey artistic director Troy Powell. The company performs a mix of repertoire choreographed by Alvin Ailey himself and new works by current choreographers. They perform both locally and internationally, and most recently embarked on a domestic tour of the United States.

“I think Ailey II is a great training base for professional dancers who want to move on to bigger things,” Wilson said of his experience in the company. “We get the full professional experience: working with choreographers, touring, rehearsing, all that. It’s a platform to launch you into something bigger, and that’s why I’m so grateful for it. Because if I think this is hard, I can’t even imagine what the big time is like. So it’s scary but exciting at the same time.”

“He pushed us in different ways that none of us have ever been pushed before, so I think we all benefited in some way working with him,” Wilson said.

The company members will also appear in “Stream of Consciousness” by AAADT member Marcus Jarrell Willis. This piece is set to contemporary music by Max Richter and involves gestural movements as a representation of inner thoughts. Wilson described this piece as “just fun” and “really weird and quirky.” He went on to explain, “We all have fun while we’re dancing it, and that’s what I can really appreciate about dancing: you just find something and go with that, and his is fun. It’s just fun, and that’s what we go with.”

Ailey II’s Fall 2016 tour made stops in the Midwest, the Bahamas and along the East Coast. One of Wilson’s most memorable moments of the tour occurred in Rockford, Illinois.

“The theater there was literally enormous and it was filled to the top with little kids, screaming at the top of their lungs and it was just adorable,” he explained. “Their energy just gives us more energy, and that’s why I love performing for children. They bring a different energy and they’re so curious and so open and so excited to see dance, and I think it’s great.”

The reality of being in a dance company involves more than just performances. Wilson and the members of Ailey II take classes every morning before rehearsing for six hours straight. This can be both physically and mentally overwhelming, but it prepares the dancers for future careers as members of major dance companies.

For Wilson, all of this hard work is worth the experience of living his dream as a professional dancer: “I love it, and I think that’s what all dancers want, to be able to do what you love as your profession. It’s incredible.”

This spring, Ailey II will be performing in Germany, France, Washington state and Hawaii. You can see them perform live in New York from March 29 to April 2 at the NYU Skirball Center for the Performing Arts.