In the Age of Trump, Keep Watch for “Fake News” 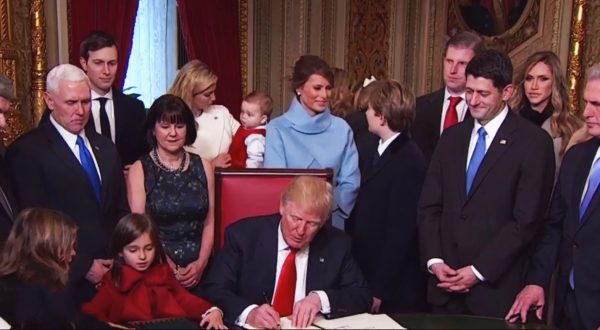 Following President Barack Obama’s farewell address in Chicago that called for Americans to come together and fight forces trying to divide our nation, President Donald Trump held a press conference that encouraged this divide. While addressing the nation and a room full of reporters, Trump and his incoming Press Secretary Sean Spicer, addressed the leak and following coverage of an intelligence dossier that has been confirmed as unverified.

While many hoped that these two would handle the situation in a professional manner, the ensuing accusations erased many of the good feelings that were left by the Obama speech the day before. Trump called out news outlets Buzzfeed and CNN for covering and spreading this unverified report, but he didn’t stop there. When a CNN reporter requested an opportunity to ask a question regarding Trump’s accusation, the reporter was denied by Trump who told him “No, you are fake news,” and proceeded to ignore the reporter’s plea to ask his question. While the reporter certainly didn’t show much etiquette in handling the situation, Trump’s accusation of “fake news” sparked a debate.

In response to these claims, CNN clarified that they only reported as to the existence of this report and they refused to publish the entire document. Despite this press conference, the term “fake news” has been used in this past election cycle to describe other sources. Given the popularity of social media and other forms of digital media, many get their information from online sources at what seems to be the instance that they occur. The issue presented here is that many of these sources are not verified, but are still spread through outlets like Facebook, which causes a flow of misinformation through the populous.

While many organizations, including Facebook working with the University of Pennsylvania, have tried to crack down on the number of unverified news sources available, it seems to be too late. Other types of fake news come in the form of misrepresenting facts or plainly spreading false information. A recent example involves NBC calling Trump out on the non-existent role he played in recent job creation which, as expected, resulted in him calling them “biased” and “fake news”. It may seem common to many that a politician will claim responsibility for any positive outcome that they had little to no influence on. The question is, can this and other examples be fake news on behalf of President Trump or is this what the Trump Administration calls “alternative facts”?

One possible reason for Trump’s display was to take the attention away from the confirmation hearings of Senator Jeff Sessions and former ExxonMobil CEO Rex Tillerson, that occurred during the same week. These confirmation hearings were the first of any of his cabinet choices and followed controversial news that Trump wanted to appoint his son-in-law as his senior advisor, which violates several anti-nepotism laws. By taking over the news cycle with his own antics, Trump was successful in diverting attention from the more sensitive actions of his early administration.

As we have seen prior in the election, Trump will create his own sound bites that will be covered by multiple news sources. This is until the vast population is sick of hearing about it. This tactic gave him the popularity he needed to gather a large amount of support during the election and now he is using it to divert the public’s attention from his controversial choices.

Aside from ulterior motives, it would be wise for the Trump Administration to limit the number of enemies it makes. By ostracizing the intelligence community and now the media, Trump will have to be careful with every move he makes, because there will be sharks in the water waiting for him. As he is already an unpopular president, many will be looking for him to make mistakes, so his opponents can call for his resignation or impeachment. As we look towards the new Trump presidency we can only speculate what his feud with the media will do to current rumors about his relationship with Russia, his controversial and inexperienced selections for his cabinet and his inflammatory tweets. If he intends to effectively carry out his office, he should be on his best behavior.