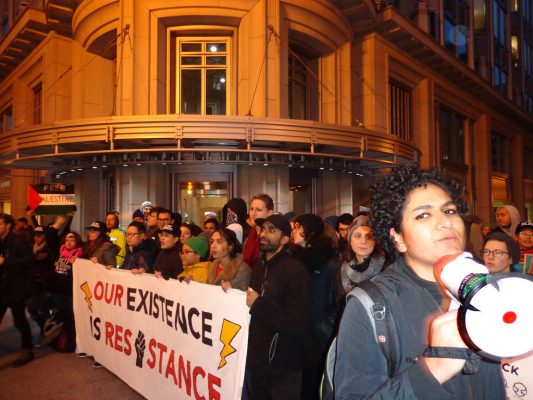 Following the inauguration of President Trump many have taken to the streets to show their displeasure. (Scottmontreal/Flickr)

I’ve been having a hard time this week knowing that this inauguration was inevitable, shifting between bouts of anger, despair and numbness at this election. I’m sure a great deal of you have felt this as well. Moving forward, I’m trying to focus on the things that are within my control. Here are some ways we can do that.

Call and email them when an issue comes up that they haven’t been vocal about. Make sure you state if you’re for or in opposition to a bill. In my experience, Govtrack.us is the best way to track bills. Political offices do keep track of how many calls they get on an issue. It’s their job to vote in the interest of their constituents. Remember, they work for us. Meeting for an in-person appointment is one of the most effective ways to influence your representatives on a particular issue. Anyone can do this if you’re a constituent of their district.

Enlist in an organization that aligns with your values and addresses the issues you wish to change.

Work as a campaign staffer for a politician you admire. Better yet, run yourself.

No matter what anyone tells you, protests work. However, it doesn’t take one day. It takes weeks, months, sometimes years.

Massive monetary boycotts are the best way to get a company to change their behavior.

Register to vote. Help other people register. Vote in local and midterm elections. Mark your calendar for November 6th, 2018. Thirty-three Senate and 435 House seats are up for election.

Healthcare; social security; climate and environment; voter rights; education; police accountability and alternatives to incarceration; immigrant rights; women’s rights; economic rights for the poor, working and middle class are all issues we need to vigilantly fight for. There will and have already been motions to dismantle these causes in the Republican-held Congress.

Whatever anxiety or fear you have about contacting someone in a position of power you need to get over real quick. You have a voice and it is powerful. Use it. Social media informs your circle, but we need to move outside the echo chamber that is our friends list. Likes, shares, and Facebook arguments aren’t enough.

If you voted for Trump (or are a Trump apologist/normalizer/give ‘em a chance-er) you need to stop pretending like your work here is done. Holding the president accountable for their words and actions is a non-partisan issue. It’s every American’s right to be politically informed and active. It’s vital to exercise that right.

Don’t let fear take over. It is a tactic that people in power, namely Trump, use to garner support. We all have more in common than the top one percent who control our government and try to divide us, and with that said, denial forgoes reality. Recognize the systems of oppression that are still alive and well, and fight to dismantle them together. Find strength in being an ally. Equality without intersectionality is dead on arrival.

Ultimately, the resistance is growing and building every day. It transcends politics. It rejects the notion that won this election: fear of the “other.” Our cause is rooted in loving one another. Opposition will try and paint us as violent rioters to discredit this movement, but we know where we stand. Nonviolent civil disobedience worked for the Civil Rights Movement, and it will work for this civil rights movement. Margaret Mead once said, “Never doubt that a small group of thoughtful, committed citizens can change the world; indeed, it’s the only thing that ever has” –except, this small group is backed by millions. Stay informed. Stay vigilant. Stay loud. Stay loving.